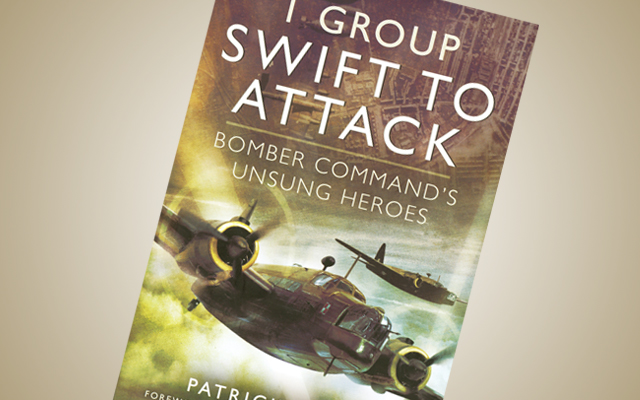 BY PATRICK OTTER
Published by Pen and Sword, Price £25

As the 70th anniversary commemoration of the Dambusters Raid continues to attract press and public attention, it is fitting that this recent book should document some of the ‘unsung heroes’ of Bomber Command. Journalist Patrick Otter has spent years researching and writing this comprehensive and insightful account of the lives of those men in 1 Group, whose bravery and history are overshadowed somewhat by the more well-known feats of Guy Gibson and co.

Told over 360 pages, the story of 1 Group during the Second World War provides an understanding of the impact of the introduction of the Wellington aircraft, as well as the expansion of the county’s airfields, through to fascinating accounts of operations and tactics used against the enemy, such as the assault on Berlin 1943–44, and countless acts of bravery among the servicemen. Throughout, personal biographies are brought to life with the help of the resources that Otter has painstakingly gathered for the project.

This book will appeal to any aviation enthusiasts, not least for the abundance of black and white images compiled within its pages. For those inspired by the current remembrance services and events taking place to pay tribute to Bomber Command, Otter’s writing would make a less obvious but very informative entry point into this part of our history. An essential resource for future researchers of the subject. www.pen-and-sword.co.uk

A BOOT UP AROUND LINCOLN BY HUGH MARROWS
Published by PiXZ, Price £4.99
Ideally suited for slipping in your rucksack as you head out for a wander throughout the county this summer, this new publication suggests ten leisure walks within a fifteen-mile radius of Lincoln’s city centre from Marton, to Bardney and Bassingham. With walks from two miles up to longer stretches of almost eight miles, this guide is intended to cater for all ages and abilities with all the usual signpostings for local facilities, geographical characteristics and the difficulty level of each walk. If the foreboding sky in the photographs of Brandy Wharf here does not put you off, there is plenty of ground to cover and history to learn on routes marked on almost all points of the compass. A ramble around Riseholme, or stroll from Stixwould and along the Water Rail Way will offer the chance to take in a variety of scenery and local landmarks and keep fit at the same time too. www.halsgrove.com

HIGH WOLDS BY DEREK WEBSTER
Published by Kenelm Press, Prisce £3
The poems in this collection by Cleethorpes based priest Derek Webster take their inspiration from the sites and surroundings of Lincolnshire, from the Brayford Pool to Boston Stump, blending the mysterious and the quotidian, with a palpable interest in divinity that almost eludes the grasp of language. Webster’s spiritual concerns permeate his verse, honouring everyday joys and pains as well as the curiosity of Lincolnshire’s sights and sounds. Many of the poems are written from a watching-the-world-go-by perspective, capturing moments of pure wonder at local events. These are not simply songs of praise; the author is a clear-eyed witness to the harshness and the transitory in nature, which underscores much of the imagery here. Available by request from: Kenelm Press, 60 Queen’s Parade, Cleethorpes DN35 0DG

NEWS
Lincolnshire’s young readers have chosen ‘Wonder’ by RJ Palacio and ‘Nevermore’ by James Patterson as the best reads of 2013. The books were chosen for the Lincolnshire Young People’s Book Award and were announced at Lincoln’s Drill Hall on 6th June.

Lincolnshire based couple Peter and Janet Roworth have recently published ‘Spirit of Lincoln’, an up-to-date photographic guidebook which details many of the landmarks and attractions within the city centre and uphill Lincoln. The book is published by Halsgrove and is available from local stockists, or direct, Tel 01823 653777.

Lincolnshire’s Ida Pearson has published a book for author Richard Westland. ‘Treasured Moments’ collects writings by Westland’s wife, Pat, including advice for gardeners as well as some of her recipes, humorous stories and poems. All proceeds from the sale of the book will be donated to The Butterfly Hospice Trust Boston Lincs. www.publishingbyidap.com

‘A Short Walk on a Bike’ is author Frank Forster’s follow-up to his successful first publication, ‘A Yellowbelly Childhood’. The new title includes recollections from Forster’s youth in Lincolnshire, the time he spent serving in the RAF and his passion for music. The book is currently available priced £7.99 by calling 01754 760661.