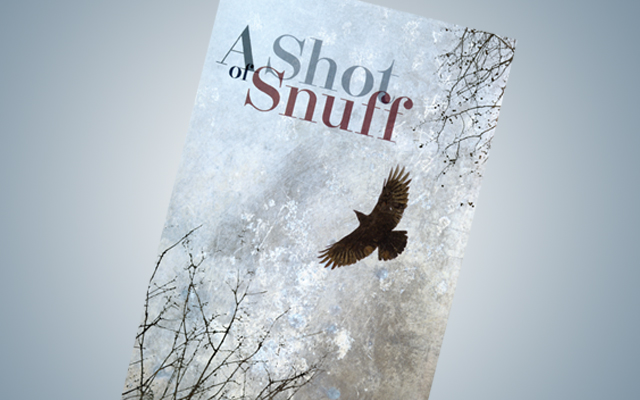 A Shot of Snuff

Lincoln author Cary Smith’s mystery romance novel, ‘A Shot of Snuff’ is set at the time of the 2010 general election, yet its references to the recent Olympic Games and its often unflattering portrayal of governmental and security departments make it pertinent today.
Much of the action, however, is set on the remote Scottish island of Stone, where ex-City leisure analyst Gavin Madden has been sent by Whitehall, in order to develop a refuge and training facility for disabled veterans and Paralympians. Unexpectedly he finds true love on the island, as well as many locals intent on hindering his work and his relationship. The further Gavin delves into the history and the characters of Stone, the more unsavoury it reveals itself to be.

Smith conceived of the novel several years ago while he was living on the Isle of Man. Intrigued by the idea that such a quiet, isolated locale might be a hotbed of drugs trafficking and other criminal activity, he set about writing a story full of mystery and sinister goings-on.

He said: “We live on an island, but it’s not the same as a little island. I used to go and sit on the beach after work in a desolate part of the island and I thought, ‘You could bring anything in here, people passing by in a boat could just dump off some drugs or anything.’ I used to say to my wife, ‘No one would know.’”

The author’s time spent on the Isle of Man is not the only aspect of his personal experience that he drew upon in order to develop the book. The protagonist is a specialist in the leisure sector, to which Smith devoted many years of his career, working in PR and marketing. After moving to Lincoln thirty-two years ago Smith became involved in a number of community projects. Lincoln Birchwoods children’s marching band eventually became the direct inspiration for the Darragh Diamonds, the band in the novel for which Gavin’s love interest, Camryn is the leader.

“It wasn’t like I was thinking ‘I can put the Lincoln Birchwoods in here’. I was interested in the ideas of the Queen of the May, and the Maypole and then I thought the female character could still be in a band.”

And then there are the current events mentioned in the book, all of which will be familiar to readers and which still seem up-to-the-minute. All of this makes for an interesting blend of personal knowledge, fictional and non-fictional elements.

It was Smith’s original intention when leaving school to become a journalist, having contributed a number of articles to the West Sussex County Times.

“I did some freelance work for the local newspaper – they paid me a penny a word, that’s old pennies of course,” said Cary.

Taking the route into advertising on Fleet Street instead, and later booking and management in the music industry, before turning to PR for athletics, Smith nevertheless maintained his interest in writing and over the years has contributed articles to a variety of magazines.

Retirement afforded him the time to undertake his first novel, and he was encouraged to write when the recent cold winters made the prospect of venturing outside less inviting. The book took roughly one year to complete, once Smith began putting all of the pieces together.

“Initially it was really a case of writing down a load of bullet points so as not to forget the ideas that I had collected over time. Then I put down a timeline for the story. I hadn’t set it at a specific time, but some of the plot events had been there a long time,” said Cary.

Whether or not these bouts of creativity in the winter months have lent a particlar mood and atmosphere to the writer’s fictional creation, Smith has certainly not hesitated to explore a number of unsavoury subjects, from prostitution to murder. The current taste for literature in the UK, however, suggests that there is an ongoing fascination with the macabre. Smith admits that many of his ideas are gleaned from overhearing grisly news items.

“There’s so much of that sort of thing going on today. Some people may well be upset, but some people might say ‘You could have been a bit grittier!’” said Cary.

On the advice of a friend, Smith submitted the finished novel to a publishing house in Brighton who felt that the book was just right for them at the time.

No months and years spent opening rejection letters, Smith’s story seems a unique one. Smith is already at work on a second novel, which is to be set in Lincolnshire.

‘A Shot of Snuff’ is available to order through the Lincolnshire Shop. www.lincolnshirelife.co.uk