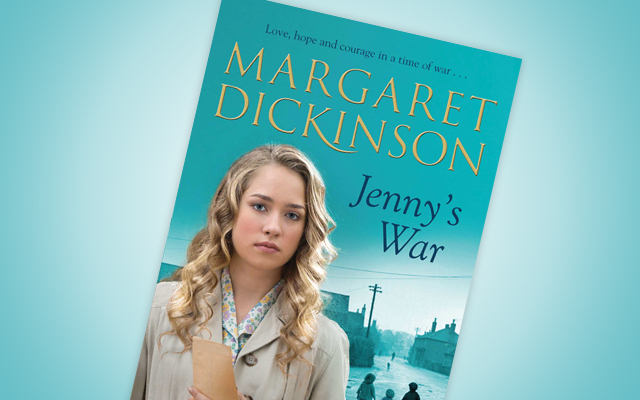 Jenny’s War by Margaret Dickinson. Published by Pan Macmillan, £6.99
Prolific Lincolnshire author Margaret Dickinson is on fine form with a moving wartime saga that is sure to tug at the heartstrings. ‘Jenny’s War’ tells the story of a ten-year-old London girl who is evacuated from the squalid streets of the East End to the tiny Lincolnshire village of Ravensfleet. Billeted with the welcoming Thornton family, Jenny meets with the sort of kindness she has never known. Life in the grand Ravensfleet Manor is a complete revelation for the young girl who soon forms a powerful bond with the Thorntons’ son, Georgie, a dashing young RAF fighter pilot. But Jenny’s idyllic life in Lincolnshire is soon upset when Georgie goes missing and her feckless mother Dot reappears, dragging her back to London to assist in a smuggling scheme. After all, who would suspect a ten-year-old of being involved in the Black Market? Jenny’s life swings dramatically between despair and happiness but throughout she never gives up hope of seeing Georgie again, for she refuses to give up hope that he may still be alive. Jenny’s War returns to characters first introduced in the novel ‘Sons and Daughters’.

Growing Better: Lincolnshire and the Potato (ed Stewart Squires and Catherine Wilson) published by The Society for Lincolnshire History and Archaeology, £15
Never dismiss the potato as being a humble vegetable. True, it is bland in appearance but beneath its dappled skin lies a culinary masterpiece. Not only is the potato a mainstay of our dinner tables, but it has long played an important role in maintaining the livelihoods of county folk, as detailed in ‘Growing Better: Lincolnshire and the Potato’. The book contains contributions by county experts in this field including Alan Stennett, David Taylor and Charles Parker. Within these pages you will learn about cultivation and the farming aspects of the potato. Crisps have played a crucial role in the county; the history of their manufacture, from the high volume producer to the artisan fryer, is covered comprehensively. As is the valuable research work carried at Sutton Bridge. YS

BOOK NEWS
The shortlist for this year’s Lincolnshire Young People’s Book Awards has been revealed. After weeks of voting, children across the county have selected their finalists for this year’s competition. The award is split into two age categories, 9 to 11 year-olds and 12 to 14 year-olds, with just five books making each shortlist. The titles include ‘Unhooking the Moon’ by Gregory Hughes, the graphic novel ‘Calamity Jack’ by Shannon and Dean Hale, ‘Midnight Zoo’ by Sonya Hartnett and ‘Diary of a Wimpy Vampire’ by Tim Collins. Children now have until 1st June to vote for their favourite online, at their local library or through schools. The awards are designed to encourage children and young people to read and use their local libraries, where the books are available. The initiative ties in with Rooted in Reading, the local reading promotion project running in schools and libraries across Lincolnshire. More information on the awards can be found at www.lincolnshire.gov.uk/lypba.

Jayne Wallace, one of the UK’s foremost mediums will be visiting Bookmark, in Spalding on Wednesday, 14th March at 7.15pm and she will be giving a talk, ‘My Psychic Stories’, as well as some psychic readings. Jayne has given readings to thousands of people and is consulted by celebrities and everyday people alike. Her accuracy, humour and directness have led to numerous radio and TV appearances, including Loose Women and The One Show. Tickets for this event are £3.50 to include a glass of wine or juice.