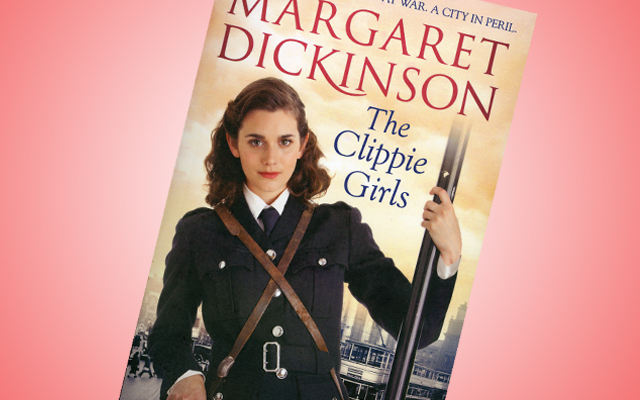 by Margaret Dickinson
Published by Pan Books, Price £6.99
In her twentieth book for Pan Macmillan, Margaret Dickinson shows again why she remains one of our most popular authors. ‘The Clippie Girls’ focuses on a family of five women living together in Sheffield during the Second World War. Peggy, Rose and Myrtle are the daughters of Mary Sylvester, whose late husband was a veteran of the first war. Mary’s mother, Grace is a stubborn matriarch, her stiff upper lip betraying a vulnerability and fear of loneliness. Peggy is a hard working tram conductress, or clippie girl who is the envy of her younger sister Rose, who dreams of working on the trams, and seizes the opportunity when the local men are enlisted to fight. A reliable daughter and popular young woman, Peggy is soon wooed by her colleague Bob. Sensing her sister’s ambivalence towards her suitor, Rose’s own affection for Bob begins to develop. The simmering tension between the girls explodes following the first bomb attacks in the city. Amid the devastation, which sees Peggy’s tram struck by the enemy, a dashing young soldier, Terry complicates the girls’ relationships with the men, and with each other, even further. Dickinson deftly shifts the focus between national concerns, the daily interactions within a tight-knit community and intimate romance and makes clear the impact that wider social events have on personal relationships and ambitions. Her prose is uncluttered, which helps to drive the action forward, and her skill in characterisation extends to those making brief appearances throughout the story. The complications of love are not overshadowed by the traumas of war in ‘The Clippie Girls’; as in any good wartime romantic saga, they are weaved together, as characters persevere in precipitous circumstances and experience the pains of both familial and national conflict.

LINCOLNSHIRE VILLAINS: ROGUES, RASCALS AND REPROBATES
BY DOUGLAS WYNN, PUBLISHED BY THE HISTORY PRESS, PRICE £9.99
If you enjoy hearing tales of the shady criminal characters who have darkened our county’s villages and cities across the centuries, and enlivened Lincolnshire folklore for many years, then this short, but action-packed new book by Douglas Wynn does not disappoint. Concise chapters detailing particular cases of smuggling, robbery, murder, pirate operations and other villainous activities paint a vivid picture of the murky underbelly of life in the county throughout history. The fate of Tom Otter might be known to many readers, but Wynn’s ongoing research has unearthed an abundance of fascinating biographies, such as those of highwayman Gamaliel Hobgoblin and heartless fraudster Arthur Vamplew, some of which will no doubt be less familiar.

BOOK NEWS
A new cycle guide of the Lincolnshire Wolds has been published by Casterby House Publishing. ‘Tour de Wolds’ is aimed at families, amateur cyclists and anyone wishing to expand their horizons and explore the county. It includes hand-drawn maps and a fact file for each route. www.arkhon.co.uk/tour.php

The popularity of crime fiction continues and a new murder mystery set in a block of luxurious flats in Lincolnshire has recently been released as an ebook. ‘Dead Money’ is written by Rodney Hobson and is available for Kindle. www.endeavourpress.com

Local author Alastair Goodrum will visit Bookmark in Spalding on Tues, 12th March at 7.15pm to talk about his latest book ‘They Spread Their Wings’ which follows six local men who joined the RAF in the Second World War. Tickets £3.50 Tel 01775 769231.