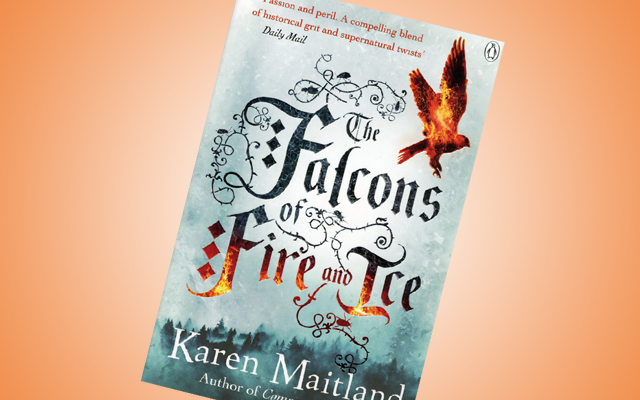 The Falcons of Fire and Ice

by Karen Maitland
Published by Penguin Books, £7.99
Lincoln based author, Karen Maitland is a writer a much repute, whose fantastical historical tales have been entertaining us for several years, and she has lent much support to the local writing community. Now available in paperback, her latest book ‘The Falcons of Fire and Ice’ is set in the sixteenth century. Maitland interweaves the tribulations of a Royal Falconer at the mercy of the Portuguese Inquisition, his daughter who is challenged to locate two rare Icelandic falcon feathers – in order for her father to be spared – and two sisters in Iceland who themselves are struggling against a mysterious power. As is to be expected the Inquisition scenes are a little gruesome but readers who can stomach the fiery first chapter will be drawn into the mystery, intrigue and action as the adventure develops. Maitland is adept at shifting the narrative point of view to bring various voices to life, and uses language which has a straightforward modern style to bring the thrilling images to the imagination clearly and draw the reader closer to the characters. The backdrop of divisive religious upheavals reflects a keen historical knowledge (there are also helpful historical notes at the end of the book) as well as a contrast for more searching personal reflections among the protagonists and to contrast with the folkloric elements of the Icelandic scenes. Karen Maitland will be signing copies of the book in store at Waterstones High Street, Lincoln on Saturday 6th April 12noon – 1pm. Tickets £3. Tel 01522 540011

ABOVE THE BOW – LINCOLN’S GUILDHALL AND ITS PEOPLE BY BRIAN TAYLOR AND HENRY RUDDOCK
Published by Ruddock’s Publishing Ltd, £10
A focal point of Lincoln’s historic High Street, The Stonebow is home to the Guildhall, which for centuries has been the meeting place for the city’s administration, from the medieval Guild Merchant to today’s City Council. The building is the subject of ‘Above the Bow’ a souvenir book intended to replace a previous, out of print publication. It is home to many treasures, which are described and illustrated here – a Cap of Maintenance, one of which has been recorded at the Guildhall since 1535, a State Sword presented by Richard II to the city in 1387 (and which a short anecdote tells us was admired by actor Omar Sharif on a visit), a silver Loving Cup given by Mayor Francis Clarke in the late nineteenth century, and original Royal Charters among numerous other treasures. The stories of Lincoln’s Mayors are also told, from Adam in 1206 to the present day, in succinct, informative biographies intended to bring tourists, visiting dignitaries and fascinated Lincoln locals up to scratch. Thousands of people busily pass through the Stonebow every day, perhaps glancing up at its high clockface to check the time, but how many are truly aware of its rich history?

NEWS
Lincolnshire born novelist, Gavin Extence has been garnering praise far and wide for his first novel, ‘The Universe Versus Alex Woods’. The book tells the strange story of a teenager with a passion for science who is hit by a meteorite and has been likened to the work of literary luminaries Mark Haddon and Kurt Vonnegut. The book is published in paperback by Hodder & Stoughton on 9th May www.hodder.co.uk

TOTT Readers welcome new members to their book club, which is held on the first Sunday of each month at Terry O’Toole Theatre, North Hykeham. The next meeting will take place from 7pm on Sunday 7th April. This month’s book choice is Ian Fleming’s ‘Casino Royale’. Free event. http://www.terryotooletheatre.org.uk/events/tott-readers/

Lincoln Inspired, an exciting new festival for the city which will combine arts, music, books, theatre, comedy and conversation will take place from 7th–12th May, with a wraparound programme starting from the end of March. Details of events are still to be announced at the time of going to press. http://www.lincolninspired.co.uk/

Award-winning author, David Zelder is set to appear at Caistor Arts & Heritage Centre on Tuesday 23rd April. His talk will focus on the mechanics of writing and how David draws on some of his life experiences when writing his short stories, poetry and his recent and acclaimed novel ‘Yomping Outside’. For information tel 01472 851605

Members of the Provincial Booksellers Fairs Association will be offering antiquarian and secondhand books and other printed material for sale at The Arts Centre, St Mary’s Street, Stamford on Saturday 6th April 10am-4pm. Admission £1. For further details visit www.pbfa.org or telephone 01763 248400