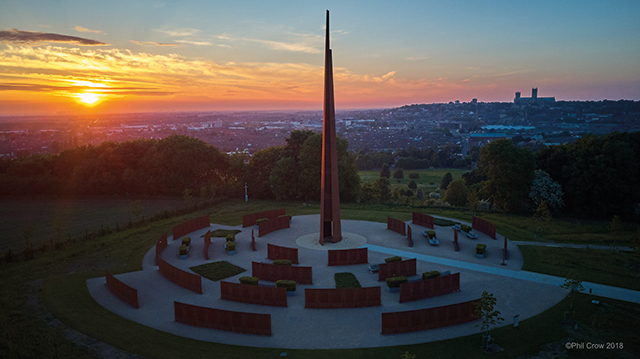 The award for Outstanding Advisory or Client Project of the Year was given in recognition of the support Duncan & Toplis has given to the International Bomber Command Centre (IBCC) near Lincoln, which opened in April after eight years of planning, fundraising and construction.

The £13 million centre tells the story of some of the one million volunteers from over 60 countries who served and supported Bomber Command during WWII. The centre includes the UK’s tallest war memorial, which stands 31m tall atop a hill overlooking the city of Lincoln, as well as a state-of-the-art education centre and memorial garden.

Duncan & Toplis worked with the IBCC from the beginning, helping the charity through all the financial challenges it faced in planning, fundraising and construction.

Nicky Barr, chief executive of the IBCC said: “The veterans, their memories and their struggle for recognition have always been at the heart of this project. We were a charity starting from scratch with a very ambitious and challenging aim to raise a lot of money for a big vision. Duncan & Toplis’ advice and support has been invaluable from day one.

“Fundraising throws up a lot of additional challenges. We have had to make sure our finance function is fit for purpose, dealing with complex financial regulation, particularly around VAT rules.

“We have relied on the team at Duncan & Toplis at each and every stage to make sure we’re operating in the best possible way. They have really taken the pressure away from us. Their work has made sure we keep our Charitable Status, and helped us keep more of our funds within the charity.”

Duncan & Toplis continues to work closely with the IBCC now that the centre is open, putting in place the right structures and systems for this next commercial stage of the project.

Duncan & Toplis director, Alistair Main, IBCC’s dedicated business advisor said: “This is a fantastic Lincolnshire based charity that we’ve been able to support from the first pound raised to the final brick laid. It’s been very complex, but very rewarding, interesting work. We are proud to support this important project and I couldn’t be happier that the British Accountancy Awards have given this prestigious award in recognition of our work. Now that the centre is open, we are continuing to support the charity by helping it to run as efficiently as possible. Our work frees up the centre to better do its work – to tell the story of those who gave their lives for Bomber Command.”