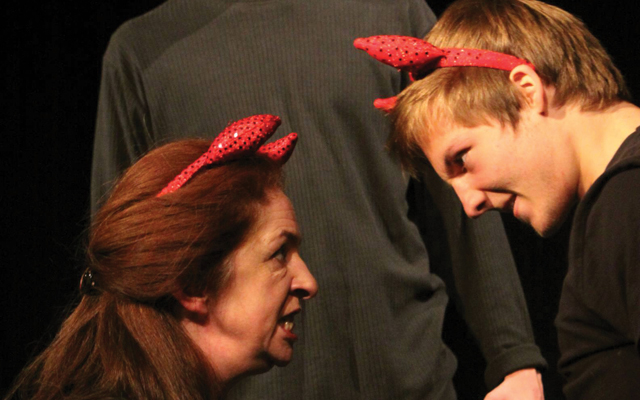 A-level student takes up mantle of the Messiah

With one foot planted firmly in the medieval past and another in the present, The Lincoln Mystery Plays remain a vibrant and valid part of the county’s cultural heritage as we discover by talking to the pivotal performer of this summer’s show.

It undoubtedly takes someone of extraordinary character and conviction to assume the role of the most famous man in history in a cycle of plays which are, in content if not quite in age, as old as Adam; that is just what The Lincoln Mystery Plays has for its current incarnation.

There can’t be many eighteen-year-olds who, in the thick of revising, stressing and sitting

A levels, as well as trying to find a university place, is willing to take on the mantle of the Messiah, but Tom Manson is preparing to do just that.

He will be playing Jesus over ten performances of the Mysteries this July, first at Bishop Grosseteste University College and then in the Medieval Bishop’s Palace and Cathedral Cloister.

There have been many before him and there will be many after, but even this far in advance of the performance it’s clear that Tom has all the potential to be something special and to bring something new to a part that everyone has preconceptions about.

The Lincoln Mystery Plays have been a significant dimension in the religious and communal culture of Lincolnshire for more than six centuries, since emerging from a format originally devised by monks as the best way to make Scripture accessible to the mainly illiterate masses.

Times have changed and the plays are now more of an entertainment than an education, but the sentiments remain the same and so does the sense, since the basis of this year’s cycle is the same as that for all of the shows performed since the modern revival of the tradition in Lincoln, spearheaded by Dr Keith Ramsey in 1978. He translated the N-Town Cycle which is one of only four surviving medieval texts and is now adopted as the city’s own.

In common with the cycles of York, Chester and Lichfield, The Lincoln Mystery Plays continue to be a source of cultural and civic pride in the city, evolving in each four-yearly incarnation with fresh direction, impetus and relevance.

This year artistic director, John Bowtell is drawing on a number of techniques to ensure the 2012 show is one both not to be missed and not to be easily forgotten. In addition to the usual acting excellence, there will be digital art projections, new musical compositions, striking staging, broad community participation and an increased vulnerability for Jesus to achieve enhanced poignancy.

And taking it all in his stride is Tom, a seasoned treader of boards in musical theatre at school in Market Rasen, but a complete newcomer to the Mysteries. With him he brings a fresh approach that complements John’s vision of promoting Jesus as an ‘everyman’ figure. This is intended to suggest that there is something of us all is the humanity of Christ, and the potential for us all to draw something from the divinity of Christ.

Describing himself as ‘an agnostic with a very keen interest’, Tom has been attending church and cathedral services and reading the Bible to help him discover his character. “Just reading and hearing sermons and the Gospels has really helped me in understanding elements of the characters and stories; especially the more human aspects,” he said.

“I’m trying to avoid recreating stained glass images, but to understand the human emotions, feelings and motivations behind the stories.

“There are some scenes where I barely speak, but there’s obviously a lot of depth to what I do say.

“I think it’s important to acknowledge that whilst Jesus is God on earth, he is also a human being on earth; I’m trying hard to work that into my performance as I think it will make it easier to get a sense of his suffering and to relate to that.”

This is also part of the theory behind the four images that you may see increasingly across the county in advance of the July dates to promote the plays, showing Jesus in different guises from a young girl to an older man – illustrating that each and every one of us has something of Jesus in us and has a cross to bear in Jesus dying for our sins.

While Tom is just eighteen, he doesn’t feel that the fact of Jesus being around thirty-three at his death is a problem. “There will be those who feel uneasy about it, but hopefully I can sway them.

“I know that every member of the audience will have their own preconceived ideas of how they expect Jesus to be depicted and I hope that by being sincere to what I see as his humanity, I can at least meet a few of those,” said Tom.

As Head Boy at De Aston School, studying theatre studies alongside English literature and history, Tom became aware of the plays through his drama teacher, Lynne Chapman who is friends with seasoned veteran Ruth Andrew, reprising her role as God from 2008.
“It’s such an honour and a thrill to be involved and especially to be playing Christ; I’m really excited about the way it’s going and think it’ll be an extraordinary show,” added Tom.

“Given their long history and legacy as a foundation of theatre, it’s such a disappointment more people are not aware of the Mystery Plays in general and of Lincoln’s especially, which sit in the shadow of York and Chester’s; but hopefully we change that with every performance.”

There will be ten shows in total, the first being a part of Bishop Grosseteste University College’s 150th anniversary celebrations and the others taking the form of a promenade of scenes within the Medieval Bishop’s Palace in Minster Yard, journeying through to the Cathedral Cloister for the Passion sequence as darkness falls, where a new cross will prove to be an incredible experience for the audience and actor alike.