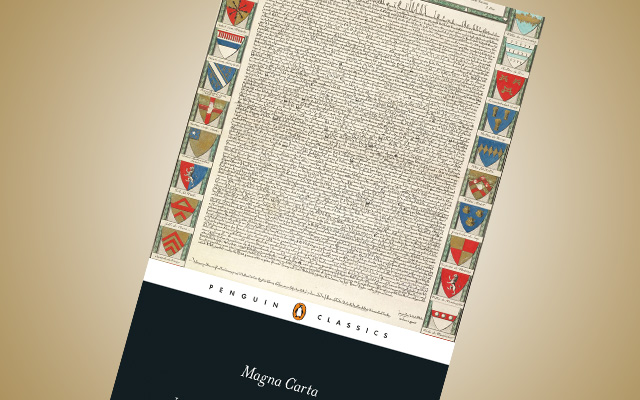 Magna Carta in 20 Places is a new book by former television news correspondent Derek J Taylor, which explores the origins and enduring appeal of the Great Charter with reference to locations associated with it. Taylor considers the importance for the United States and dispels myths about the document’s history. Published in May by The History Press, www.thehistorypress.co.uk

Lindum Books will join in Lincoln’s Magna Carta celebrations with an evening talk and signing event with Professor Stephen Church on Friday 17th April at 7pm at The Collection, Lincoln, with his new biography King John: England, Magna Carta and the Making of a Tyrant. Drawing on thousands of contemporary sources, Stephen Church tells John’s story – from boyhood and the succession crises of his early adulthood, to accession, rebellion and civil war. Tel: 01522 262374

The least that is typically known about Magna Carta is that it was signed by King John in 1215 after negotiations with barons at Runnymede who were intent on curbing his power; that it is the foundation of democratic human rights and that one of four original copies is preserved in Lincoln. Within the first thirty pages of this new Penguin Classics edition of Magna Carta all of this common knowledge is upended.

The 1215 Charter was never referred to as Magna Carta (or ‘Great Charter’) and this subsequent title is the result of copywriting and translation accidents after subsequent versions drawn up by Henry III (alongside the Charter of the Forest in 1218) and confirmed by Edward I. The definitive version of the Charter was written in 1225.

The Runnymede Charter was never signed, as a recent gaff by the Royal Mint reminded the public; it was endorsed with the seal of King John. The first handwritten multiples of the Charter were known as ‘engrossments’, not ‘copies’ as the latter would not be legally binding. Rather than guaranteeing the equal rights of all persons, the Charter of 1215 primarily secured the liberties of ‘free men’ – earls, barons and knights – not unfree peasants for instance.

As the 800th anniversary celebrations and public events focusing on Magna Carta continue this year, I was intent on doing what I suspect relatively few people will bother to do: read Magna Carta. This task is made especially enjoyable, thanks to Carpenter’s clear commentary and contextual writings included in this edition. I doubt that any recent publication matches it as a comprehensive, yet accessible, guide to this important historical document, which includes the Latin text with English translation. The book is up to date for 2015, drawing on the most thorough research undertaken by scholars at work on the Magna Carta Project for the University of East Anglia.

The value of the Lincoln engrossment is evident. Carpenter judges it to be the most ‘finely written’ of the four and his preferred as a work of art. Moreover, it is the Latin script of the Lincoln Magna Carta that is used for the translation in this edition. The inscription ‘LINCOLNIA’, as Carpenter notes, also assures us that it was originally destined for Lincoln, unlike the two documents in the British Library. Ironically, however, the Castle would not have been deemed a suitable place for the Charter, as Carpenter explains.

As for the contents of the Charter, many of its chapters concern money and property. There are crucial outlines relating to justice. Chapters 39 and 40 are still part of UK law; these refer to the right to trial by jury and freedom from arbitrary imprisonment or confiscation of property. The Charter established the principle of rule of law and was intended to do so for all subsequent reigns.

Mention is given first to the church which is declared free from the interference of the king or his officials in its decisions regarding ecclesiastical appointments. At this time in history, with the increasing spread and influence of the ideas of Christianity and important papal reform, it was the church that inspired the idea of equality among all ‘souls’ which would later shape the modern nation states in the West.

The 1215 Magna Carta ought not to be credited overly much in terms of its import for the human rights and freedoms that we expect in liberal democracies today. The Runnymede Charter was soon abandoned but Carpenter acknowledges that the anniversary of the 1215 document predominates the 1225 Charter, since without the former the latter would not be the document that it is.

This edition of Magna Carta reminds us that unless crucial developments in the history of liberal democracy are properly understood we risk letting principles of freedom be dissolved in the short-term interests of government or particular groups within our society. Adjacent to this are renewed questions about the limits of freedom, with pressing dangers that threaten to overturn the achievements in law to date.

A selection of Lincolnshire history books and publications authored by local writers are available to purchase from the Lincolnshire Life webshop. Learn all about the county past and present and enjoy stories from a wide range of unique voices. The perfect gift this Easter.