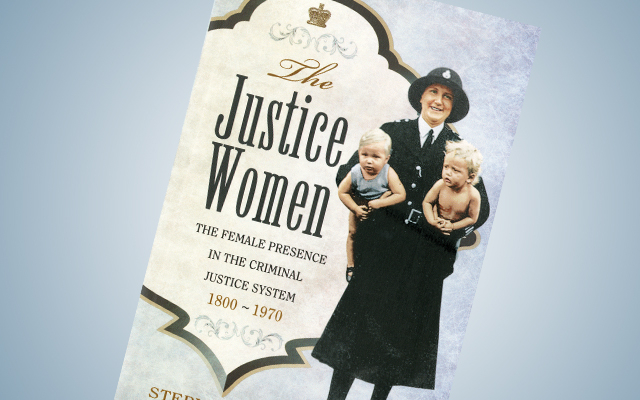 The Kirton in Lindsey Society has reprinted LAE Dejardin’s study The Church in Kirton in Lindsey, which provides the most comprehensive account of the development of religion in the town. The book is No 2 in the Society’s Local Studies series and was first published in 1993. Copies are priced at £8.50 and are available to order from www.kirtoninlindseysociety.org.uk

Novelist Adam Baron, who grew up in the county, has recently published Blackheath, a darkly comic contemporary novel about parenthood, work and personal fulfilment. Several of Baron’s previous books have been dramatised on BBC Radio 4. Published by Myriad Editions.

Meze Publishing has released a new Lincolnshire Cookbook featuring over 35 recipes, and chef and food producer profiles, that cover the range of food and drink the county has to offer. The publication is part of
Meze’s series of regional cookbooks. www.mezepublishing.co.uk

THE JUSTICE WOMEN
BY STEPHEN WADE
Published by Pen and Sword,
Price £12.99

Many recent, successful crime dramas have centred on strong female police officers but the inclusion of women among all professions relating to the justice system, from bobbies on the beat to solicitors and judges has been the result of hard won changes in law and culture.

Stephen Wade’s latest historical book, The Justice Women charts the progresses made by women throughout the last century and the impact that the Great War, women’s rights campaigns and shifting public attitudes in particular have had on opening up career opportunities that were long unavailable for half the population – and are still, sadly, unthinkable in some places in the world today.

By and large it is an encouraging read, with accounts of clear-headed determination rightly breaking closed circles that had excluded women in the legal professions. Though, of course, with reports of disparity in pay still featuring in the media, real equality may yet be ahead.

Wade devotes each chapter to a particular sphere of the justice system and provides informative case studies focussing on certain women, with mention made of Edie Smith, the first policewoman to be sworn in, in Grantham in 1915, and the work of the matrons of Lincoln Castle prison.

FOR THE LOVE OF CLASSICAL MUSIC – A COMPANION
BY CAROLINE HIGH
Published by Summersdale, Price £9.99
If you are looking to gain a better appreciation of classical music, Caroline High’s primer on great composers, the ins and outs of their famous works in performance and even the etiquette of the concert hall is a worthwhile starting point. The author has experience not only of the stage, having been a professional actress and singer, and lifelong chorister but was also the longtime editor of national consumer magazines and so is able to write well for a general audience, sharing her serious knowledge in a humorous style.

Recognising that classical music is still a daunting prospect for many listeners, the author has compiled a handy reference book, covering the all the basics from introductions to the concertos of Bach and Rachmaninoff, to a glossary of musical terms and a wealth of lively biographical tales. This means the book is suited not only for classical music aficionados looking for an instructive overview of the genre, but also for novices as well.

High explores the different ways in which classical music feeds into our daily lives, beyond the annual Proms and the Classical radio stations, noting some of the soundtracks to popular films and the carols sung at Christmas, to help newcomers recognise how much of this type of music they may already know and enjoy.

FLYING THE NEST
BY HANNAH DALE
Published by National Trust Books, Price £9.99
Artist Hannah Dale’s nature inspired designs for greeting cards and giftware have already garnered widespread popularity, with her Lincolnshire based Wrendale Designs studio earning three prestigious Henries awards.
Dale has also forged a creative relationship with the National Trust and the conservation organisation has published an illustrated book authored by Dale, featuring an array of animals in their earliest days of life. When Lincolnshire Life interviewed Dale in 2014, she was in discussions to produce the book, so it is nice to have the opportunity to see the finished product and catch up with what she has been doing.

Dale’s knowledge of wildlife is reflected not only in her bright, detailed watercolour paintings but also her accompanying short texts, which draw upon her zoological training to give the reader a sense of each species’ unique characteristics.

The book will make for a perfect gift for those charmed by the wildlife around them and those eager to teach young readers more about the animals they love.