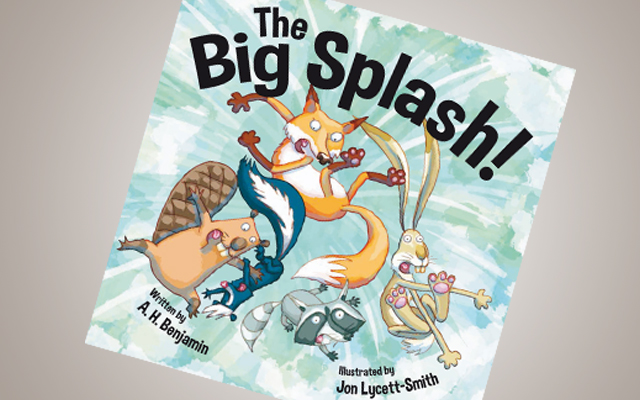 Words by:
Yusef Sayed Featured in:
May 2014
Share Article

The Lincolnshire Wolds Railway Society have released a new book. Louth: A Lincolnshire Railway Centre by Alf Ludlam covers the history of the market town’s railways from the early days through to closure in the 1970s. The publication is available from the Ludborough station shop priced £5.95 or by mail order. For more information go to www.lincolnshirewoldsrailway.co.uk

Kevin Pearson, a social worker at North Lincolnshire Council has illustrated a new children’s book called Swell, authored by his friend Joe Solo. The book tells the story of tiny dinosaurs that swell up when it rains. All proceeds from the book will be donated to The Blue Door, a women’s charity based in Scunthorpe. Swell is available for purchase at 20-21 Visual Arts Centre for £4.99 Tel: 01724 297070

When Dogs Could Talk is a new collection of poetry by Skegness born John White. The book collects forty years of verse and is split into four parts, each available as an eBook from Amazon. Part one, Into The Green, is a collection of poems about John’s life in Grimsby and Skegness.

Pete Hopwood from Coningsby is hopeful for success with the publication of his debut book, Why Me? The book is an anthology of short stories, poetry and a few observations on life as well, accumulated over several months after he joined Sleaford Writers Group. It is available from www.fast-print.net/bookshop priced £4.99

THE BIG SPLASH BY A H BENJAMIN
Published by Digital Leaf
Price £6.99


Lincolnshire author A H Benjamin has written more than thirty books, which have sold worldwide, in more than twenty translations. His latest title is a children’s story that will appeal to any parents seeking a new bedtime read for their little ones. It tells the story of Skunk, Beaver, Hare, Raccoon and Fox, who are all perturbed by an unfamiliar sound, ‘Da-Dump!’ Wonderfully illustrated by Jon Lycett-Smith, this is best suited to pre-school children and shares a valuable lesson about facing fears and embracing new experiences that might just inspire the adults too. For more information www.digitalleaf.co.uk

ENGLISH ELECTRIC CANBERRA: THE HISTORY AND DEVELOPMENT OF A CLASSIC JET BY BRUCE BARRYMORE HALPENNY
Published by Pen and Sword, Price £16.99
Making its first appearance in 1949, and remaining in front-line service until 2006, the English Electric Canberra was a vital part of the RAF during its operational years. Britain’s first jet bomber, it fulfilled a wide variety of duties for the air force, including photo reconnaissance and atomic cloud sampling. In this reprinted edition of his detailed and richly illustrated history, former member of the RAF Bruce Barrymore Halpenny conveys the central importance of this military plane to British peace and security. Halpenny documents the development of the aircraft, the trials and travails of bringing it into operation, the significance of Wing Commander Ken Wallis to the story, and its subsequent role in Britain’s aviation heritage. The book is suited to the enthusiast and general reader alike. www.pen-and-sword.co.uk

THE JOHN REDDISSON SAGA – BOOKS ONE AND TWO BY FREDDY JOHNSON
Published by Grosvenor House Publishing, Price £9.99
Growing up amid the tumult of the Second World War, moving from place to place as a young evacuee and eventually entering the world of the military and espionage following National Service, John Reddisson’s story is told in these new books written by Lincolnshire resident Freddy Johnson.

Drawing upon his own experiences – most interestingly of all perhaps his role as British Liaison Officer to the Soviet Exchange Mission in West Germany during the Cold War – and told against the backdrop of several countries, these two volumes neatly blend autobiography and fiction and are packed with personal detail and historical interest. For those looking to gain further insight into the conditions, events and intrigue of life during and after the Second World War, from both the ground level of the ordinary citizen and the ranks of the British Intelligence, Johnson’s fascinating account will not disappoint. www.grosvenorhousepublishing.co.uk