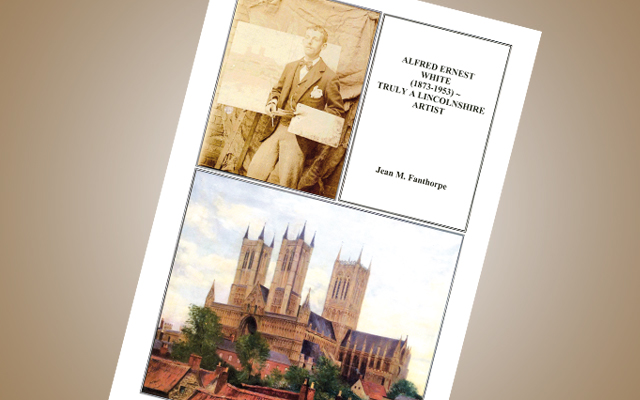 A biography of Grimsby born swimmer Brenda Fisher, who in 1951 became the fastest woman to swim the Channel, has been published by North Wall Publishing. Blonde in Deep Water is written by Lucy Wood, who also compiled The Grimsby Book of Days. For information visit http://lucywoodauthor.com

An Elizabethan Assassin: Theodore Paleologus: Seducer, Spy and Killer by John Hall is a new book exploring the life of a notorious underworld villain and his connection with the disreputable Earl of Lincoln, involving wars waged from the earl’s stronghold of Tattershall Castle. Published by The History Press, thehistorypress.co.uk

Alfred Ernest White (1873–1953) – Truly a Lincolnshire Artist by Jean M Fanthorpe
Published by Fanthorpe Publishing, Price £10
It might not seem readily apparent that there should be any similarity between classical painter Alfred Ernest White and writer Ted Lewis, best known for his 1970 English noir novel Jack’s Return Home. It becomes clear from reading these recent books, however, that the lives of both these interesting Lincolnshire raised figures were characterised by a sense of underdeveloped talent and reflect shared difficulties in making a living as an independent artist in the developing commercial environment of the twentieth century.

Ted Lewis’s second novel was adapted for the screen and directed by Mike Hodges as Get Carter, a now cult British crime film starring Michael Caine. The novelist spent his early years in Barton upon Humber and much of the action of the original Jack Carter novel is set in the gloomy industrial landscape of nearby Scunthorpe (in the film, substituted for Newcastle). Author Monty Martin has in recent years collected historical information and recollections from Lewis’s contemporaries, in the hope of encouraging further interest in his writing. Martin did encounter Lewis on a hospital visit at the end of his short life – Lewis died at the age of forty-two of alcohol-related illness – but did not know him personally.

Martin paints in all the particulars of Lewis’s life, from his early interest in cinema, jazz and writing, to his years at Hull College of Arts and Crafts which would lead to freelance and other contracted work in graphic design in the 1960s in London. He gained employment as an animator for TV series The Lone Ranger and as supervisor on The Beatles’ Yellow Submarine film. But it was his crime fiction, often inspired by encounters with London gangland figures and drawing on the scenery and dialect of his hometown, that would lead to Lewis’s biggest success.

As Martin announces in his foreword, this slim primer “attempts no in-depth literary critique…it is a sketch”. With this in mind, it is certainly a clear, accessible introduction with an intriguing cover portrait of Lewis, in moody colours, with tired eyes and fag in mouth – evoking the personality Martin describes of the hard-living night owl. However, the writing is let down at times by clumsy phrasing. Also, such a book might be likely to generate even more widespread enthusiasm for Lewis’s work if it paid a bit more attention to the ways in which his prose has the ability to capture the reader and how it invigorated 70s British crime fiction, as Martin claims, with more examples.

Jean Fanthorpe’s study of her great-uncle Alfred White draws on research which formed the basis for her masters degree. White experienced some national exposure as an artist, with a scathing postcard he created during the Lincoln Typhoid Epidemic of 1905, which was published in The Mirror. But, as the author reminds the reader repeatedly, White stuck to a classical style of realistic, workaday painting throughout his life and remained in Lincolnshire until his death in Skegness, in 1953. While he managed to get by, these factors are no doubt largely responsible for his lack of repute or any striking developments in his work. But what White’s disinterest in following the Impressionists, the Vorticists or other movements leaves us is an accurate record of the changing face of Lincoln in particular.

Changing opportunities for the freelance artist in the first half of the twentieth century are here again foregrounded, with White attempting work in all manner of fields from courtroom sketches to collectible postcards and even shell portraits, to sell from his home and shopfront in Skegness. As with Lewis, the difficulties of making a living as an artist is underlined.

Fanthorpe’s book is illustrated with many examples of White’s work, and also the tools of his trade and other paraphernalia. What is particularly admirable about Fanthorpe’s study is that it resists hagiography. Though clearly passionate about encouraging interest in the work of her relative, Fanthorpe is forthcoming with her criticisms of White’s work, and whether praising a piece, or comparing it unfavourably with another artist’s work in a similar vein, Fanthorpe’s comments are articulate.