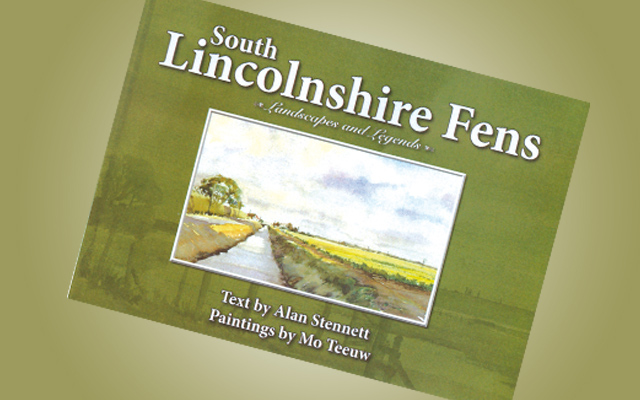 What a charming and attractive book. Landscape format (with padded covers) is ideal for thirty delightful depictions of fenland landscapes and places. They include the North Forty Foot Drain (cover), New Bolingbroke, Boston, Spalding and Crowland, flowers and potato growing, windmills (Sibsey and Moulton), churches and bridges, and coastal scenes including Surfleet Seas End and Freiston Shore (not Freiston). Together they capture the sense of fenland. Flat, or nearly so, some of it may be, but the landscape includes wonderful buildings.

The sense of fen is also reflected in the highly readable (and chatty) text – an historical introduction and pithy descriptions and comments to accompany each painting. They reveal an intimate knowledge and understanding of what is to many the least appreciated Lincolnshire landscape.

The third section – A Fens Miscellany – is about how the fens were formed, rivers and drains, towns and crops, the flowering fen, and men of the fens including Hereward the Wake, Matthew Flinders and rugby player Cyril Lowe.

And overarching all is something the fens are particularly famous for – big skies. Highly recommended.

Rumours of Roman Finds ed by Steve Malone and Mark Williams. Heritage Trust of Lincolnshire, Old School, Cameron St, Heckington NG34 9RW
ISBN 978 0 948639 49 4
Recent work on Roman Lincolnshire, being the proceedings of a conference at Lincoln in 2005. Much new evidence has come to light since publication of Ben Whitwell’s ‘Roman Lincolnshire’ in 1970 (revised 1992) which illuminates understanding of life and activity in the county 1600 to 2000 years ago. Includes forts and marching camps, coastal defences, results of excavations at Lincoln, Welby Heath, Saltersford and Sleaford, and the use of gold.