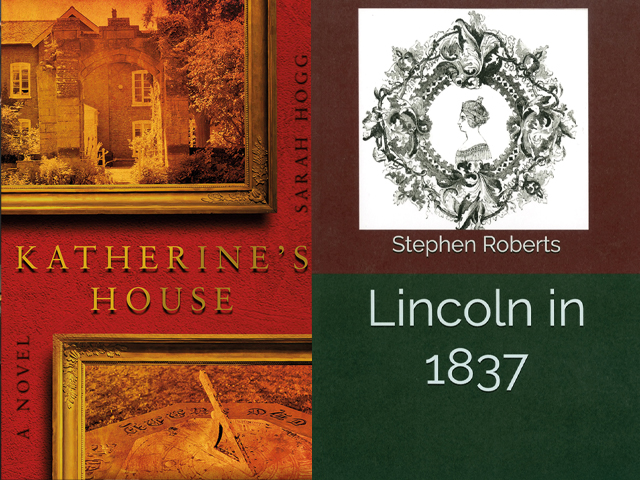 Yusef Sayed’s review of the reads
Katherine’s House
By Sarah Hogg
In Sarah Hogg’s new book, Kettlethorpe provides the backdrop to a number of lives lived across many centuries. Hogg is currently a resident of the historical Kettlethorpe Hall and has drawn upon available records to blend fact and fiction, evoking very different eras effectively.

The stories emphasise the role the county played during significant upheavals in history, from the Battle of Lincoln Fair in 1217, through the Lincolnshire Rising in opposition to Henry VIII’s religious reforms, the Civil War of the seventeenth century, the development of the tank during the Great War and the fortitude of Bomber Command in the Second World War.

Each chapter focuses on one or more residents of Kettlethorpe, their romantic lives, allegiances and aspirations. In order to tie together such a variety of stories, Hogg uses the device of a golden cross which is passed on, or recovered, from one generation to the next. There are also returning phrases that attentive readers will catch, “Black over Will’s muther’s”, for instance.

Hogg’s characterisation ranges from the heroics of battle to the self-consciousness around class distinctions, with flashes of humour and a sensitivity to the growing intimacy between characters living through often testing times. The feel and identity of the county is also richly drawn out, in speech and description.
The role of women throughout history is underlined all the way, though Hogg’s more general commentary on each period between the chapters seems somewhat unnecessary – her authorial perspective can often be gleaned from the narratives – despite the useful clarification it provides as to which lives are real and which are imagined.

Published by The Book Guild. Price £9.99

Lincoln in 1837
By Stephen Roberts
This overview of happenings in the city of Lincoln over the course of one year reveals what has changed and what seems to stay the same. Heated political squabbles, local fundraisers and sporting fixtures, and complaints about inadequate infrastructure bring the Victorian era close to our own but there are stark differences: “the stench and the flow of blood” from the slaughterhouse among them.

Author Stephen Roberts draws on the newspaper articles of Thomas John Nathaniel Brogden, writing for the Lincolnshire Chronicle and Thomas Cooper for the Stamford Mercury, men at very different ends of the political spectrum and given to effusive support of their preferred policies and public figures, and withering criticisms of their opponents.

Conveyed in the style of reportage, the book proceeds month by month showing what drew positive attention – such as the care given to those in the city’s asylum or the fine quality of the performances on stage at the Theatre Royal – and what didn’t: the disorderly behaviour of drunks, despite the efforts of the temperance movement, and the state of the pavements.

It is interesting to note that even such staunch partisans as Brogden and Cooper both changed their views in later life, which gives the reader some hope that open minds are a constant through the ages, too.

This chronicle of twelve months in Lincoln’s history, when the remoteness of the city meant news of Queen Victoria’s accession arrived late, is accompanied by black and white archival images, which unfortunately do not include a portrait of Brodgen. With Cooper, thankfully, one can put a face to the name.

Published under the imprint Lincolnshire Lives, available from Amazon. Price £3.99