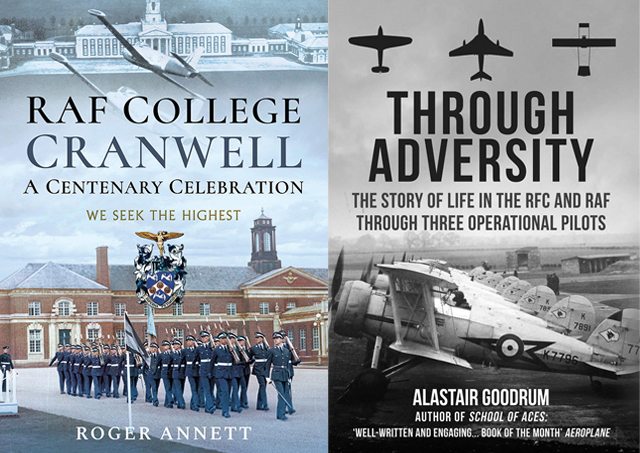 ‘We Seek the Highest’: RAF College Cranwell – A Centenary Celebration By Roger Annett
This February marks 100 years since the first cadet entry into RAF College Cranwell, which would go on to become renowned as a training establishment for generations – and remains so to this day. To coincide with this anniversary, Roger Annett’s new book focuses on the experiences of 81 entry (1959-1962), among whom he counted himself.
While the period under scrutiny was a time of experimentation as far as the educational programme at the college was concerned – with Cranwell endeavouring for the first time to provide a degree-level education alongside rigorous flight instruction – the testimony of Annett’s peers gives a much more general picture of the demands and wide-ranging experiences that will be familiar to many who have been part of the College over the decades.
The book offers an in-depth, term-by-term account of daily life for a group of young men who were expected to keep to a gruelling schedule of flying hours and academic classes. In addition there are the regular parades, sporting fixtures, trips away and VIP visits – or ‘drill, bull and G-pulling’. From the first blackouts on flight tests to Passing Out at the end of their training, insight is given not only into the pressures on the cadets’ time but also the awkward collisions of social backgrounds.
Bringing the story up to date with a discussion of Cranwell’s current role as an Initial Officer Training college makes this a comprehensive document of the first 100 years.
Drawing on personal diaries, reminiscences, college journals, and including copious black and white photographs, Annett gives us a sense of the emotions and traditions of Cranwell, while also reflecting on the RAF’s role in the present era.
Published by Air World Books, Price £30 (hbk)

Through Adversity By Alastair Goodrum
The sight and sound of aircraft over Lincolnshire is so commonplace as to go unremarked more often than not nowadays, but as Alastair Goodrum’s latest book reminds us, this was once a thrilling novelty. The arrival of pilot Leonard Dawes back in his home village of Long Sutton, recounted in Through Adversity, was cause for much excitement in 1913.
Dawes’ story is one of three told here, as a way of tracing significant shifts in aviation training, technology and air defence throughout the twentieth century. Sutton Bridge appears in the other two biographies, of ‘Dickie’ Barwell and Brian Fern, who both found themselves based in the county for periods as part of their own distinguished air force careers. While Dawes was present at the birth of the ‘age of aerial support of the battlefield’ in the First World Ward, Barwell led his squadron during the ‘Battle of Spurn Head’. Fern played his part in the post-war expansion of the RAF’s air defence at the time of the Korean War and the Soviet threat. As part of the V-bomber force in the Cold War era, Fern was a leading figure in the introduction of air-to-air refuelling and retired to the county years later.
Less heroically, the ‘adversity’ that these pilots had to face was more often than not the adverse weather that made flight training and tests of new aircraft and technologies frustrating and unsafe.
Published by Amberley Publishing, Price £20 (hbk)
Goodrum provides an exhaustive report of hours clocked, pilots, jets flown and logged incidents. Though fellow enthusiasts might relish the amount of detail, such pages of inventory can be wearying for the general reader.