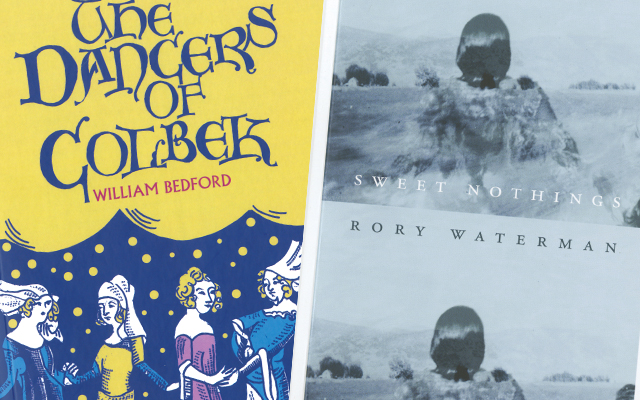 Sweet Nothings – By Rory Waterman
‘Nothing’ has given us much to remember in the history of English literature. ‘Nothing will come of nothing,’ says King Lear before Shakespeare’s tragedy unfolds, and ‘Nothing to be done,’ Estragon is concluding at the start of Beckett’s Waiting For Godot. In his latest poetry collection, Lincolnshire raised Rory Waterman draws out yet more subtleties and complexities of the word. Sweet Nothings is divided into two parts: the first skewering the bureaucracy of higher education, belligerent nationalism and fish-out-of-water work experiences, while the second explores more painful personal relationships.

Nothing can of course also be represented by zero, an 0, and similarly Waterman’s poems often come full circle, starting out from a single word and ending back at the same – seemingly getting us nowhere. But within and between his poems are numerous echoes and allusions that repay repeated reading. His witty use of rhyme is often unnoticed at first, though a series of poems about a marital separation comes to an end with the verse wrenched into two halves on the page. Even the tradition of the epigraph is played with.

Waterman blends dialect and academic vagaries with snatches from popular song and homages to favourite poets. The presence of Larkin is pronounced: not only in one scene in which the narrator is ending a lecture on ‘Reasons For Attendance’, but also in ‘Re: Re: Application’, Waterman’s update of Larkin’s ‘Vers de Société’, featuring the fictional professor Bob Pintle.

Waterman captures scenes from his 1990s youth, its music and sporting fixtures but he also considers the lure of the virtual, the urge to ‘look it up’ on the web – historical facts, past friends – and even the move from the museum-piece technologies of the world wars to the remote weaponry of the Reapers based in RAF Waddington.

‘Do not pretend/you have done/all you could for anyone,’ Waterman warns. It is clear from the skilful, humorous and frank way in which he considers the conflicts within and between people, Waterman is not on to nothing.

The Dancers of Colbek – By William Bedford
William Bedford’s new book takes its inspiration from a medieval poem by the Lincolnshire born Robert Mannyng, and explores his own and his ancestors’ experiences of life in the county amid changes to long established ways of life.

Beginning with an account of Bedford’s grandmother visiting the author as a newborn, the succinct and evocative verses that follow also draw on centuries of poetry, from Tennyson to Eliot, giving a sense of parallels: between the innovations within the art form causing breaks and tensions, and the opening up of rural life to new norms and the impositions of wartime.

Isaac Newton’s life in Grantham is imagined, and we get a glimpse of Evelyn Waugh writing in the library at Belton, while the arrival of US servicemen in Hemswell throws lives into upheaval. Cold and quiet, gathering and fending against the elements are the dominant images of local life here; the pastoral punctured by the movement of forces: the military, and those more imperceptible – even time.

The central section of The Dancers of Colbek is based around the life of Northamptonshire poet John Clare, and Bedford relishes in the multiplicity of meanings that can be achieved by using dialect. His unrhymed lines draw more attention to the distillations of image and sentiment that arise in his atmospheric scenes; as in the finale of ‘The Floods’ – where ‘silence wakes to meet the sea,/as winter shores meet nothing’s blank stare’ – and in the recurring imagery of the ‘blue Wolds’.

While Bedford is adept at capturing the fine detail and emotional registers of a type of small community life that will resonate with many readers, the dance continues against attempts to rein it in. As this collection comes to an end, one is reminded of the permanence only of the transitory – ‘turning grief to tearless stone’ – and all the untranslatable life that rushes on heedless of our own, yet continues to inspire the poets among us.