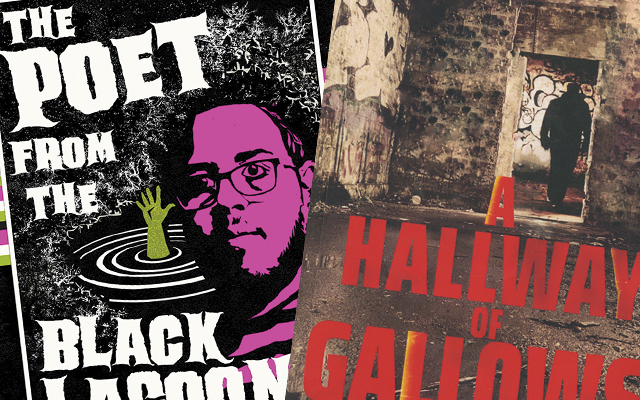 Yusef Sayed’s review of the reads
The Poet from the Black Lagoon
by Simon Widdop
This second collection of poems by Wakefield based poet Simon Widdop to be published by Lincolnshire’s Plastic Brain Press reflects a shared fascination with macabre themes and memories shaped by grainy VHS tapes.

The Poet from the Black Lagoon is inspired in particular by the horror films of the past, from the monsters of the 1950s Universal productions to the ‘video nasties’ of the 1980s, through to modern day reboots. Odes to the darkness and celebrations of the dreadful are interspersed with haiku poems, illustrated by Melody Clark, that continue Widdop’s theme with succinct wit.

Widdop not only reveals a wide-ranging knowledge of pop culture and the occult but also a deep sense of the ways in which the fears manifested in his favourite films often represented wider fears in mainstream society – of the ‘other’. As a result, Widdop’s sensibility is avowedly anti-conservative, and this comes to the fore in a spell to ward off Tory MPs.

The challenge for contemporary writers remains how to ensure the effectiveness of such politicised rhetoric when it has become so formulaic, essentially dead itself. How to re-animate the body of the protest poem? Widdop elsewhere puts a clever spin on the simile, and the modern verbal and social media tic of the ‘like’, in his extended ode to Halloween, ‘On Famous Monsters: The Requel’.

Widdop draws us to that which disrupts the ordinary, reminds us of what lies obscured; finding beauty where one might not expect it; all the while aware of the lure of the communal, of initiation rites and empathy with those with whom we identify – as monstrous, or imperfect as they might be. And that where there is terror there is humanity – and poetry – as well.

A Hallway of Gallows
by Trudey Martin
Lincoln based author Trudey Martin uses not only the details of her local surroundings, from Steep Hill to Sincil Bank, as a backdrop for her recent thriller but also all of the modern technologies that are reshaping everyday life and detection methods alike.

But despite the use of email and texts, photo swapping and live streaming to drive the plot forward, A Hallway of Gallows employs many of the commonplaces of the crime novel and noir genre. It also reminds us of the enduring human instincts that new media are put in the service of.

A Hallway of Gallows sees private investigator Verity Spencer following up on the disappearance of young Congolese immigrant Gloria. The details of her life in foster care and involvement with a number of local men leads Verity into a world of sexual exploitation.

Martin’s characters are distinctly drawn – apart from two faceless strongmen who appear at the start and end of the book – and Martin is attuned to social differences among the well-off middle classes, public sector staff, care home youths and ‘entrepreneurs’ of the dark web, showing many facets of contemporary city life.

Verity’s brazen confrontation with underworld criminals are at times far-fetched, showing a simultaneous flight and fight tendency, but except for one dramatic scene which takes place during a lightning storm, and the extended finale that some readers may find too graphic, Martin reminds us that much of the worst is happening by day, not hidden in the dark depths of a packed nightclub or shadowy alleyway but just out of view, or unashamedly out in the open.

Martin clearly wants our attention to the issues she is describing to continue beyond the final page, showing a social conscience behind the narrative set pieces and suspense.