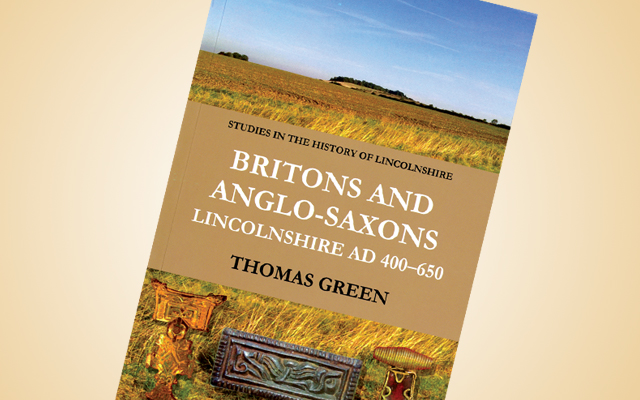 by Thomas Green, published by the History of Lincolnshire Committee for the SLHA, £17.95
This is the third volume in a series of monographs published by the History of Lincolnshire Committee, which seeks to illuminate fascinating aspects of the county’s history through rigorous academic research. Louth based Thomas Green, who is currently a researcher at the University of Oxford, here delves into the period between the fourth and seventh centuries and investigates Aglian-British relations prior to Anglo-Saxon rule. The author builds on existing literature and embraces a wide-ranging, interdisciplinary approach to gathering source material from within the Lincolnshire area – including through archaeology and linguistic research – to determine that a polity known as ‘Lindes’ was based in Lincoln in the sixth century and continues to investigate the region’s position within the early Anglo-Saxon kingdom of Lindsey. As with all of the titles in this series it is a scholarly volume and will be more suited to the history buff than the casual reader, but the results of Green’s research are likely to impact on the popular understanding of Lincolnshire in post-Roman times in years to come. A range of books published by the Society for Lincolnshire History and Archaeology are available through the Lincolnshire Life Shop www.lincolnshirelife.co.uk

GAINSBOROUGH THROUGH TIME
BY SALLY OUTRAM, PUBLISHED BY AMBERLEY PUBLISHING, £14.99

With each passing week, it seems that another irrecoverable change is being wrought upon our local towns, most noticeably through the changing face of high streets across the county as the economic crisis continues. The closure of one more retail giant, however, may seem unremarkable when one considers the tremendous impact that past wars, industrial advances, social upheavals and cultural fashions have had across the past century. Many of these shifts are captured in Gainsborough Through Time, the latest in a series of popular photographic books which have sold over 250,000 copies to date. From the Market Place to Marshall’s Yard, from Trent Bridge to Gainsborough Trinity Football Club the landmarks and local infrastructure of this town are here documented using pairs of images, in colour and black and white, comparing the present day with snapshots from throughout the 1900s. It is a simple and effective format, complemented by single paragraphs that offer historical information, reminding us of Gainsborough’s rich past, its enduring buildings, past residents and modern features.

BRAYFORD POOL: LINCOLN’S WATERFRONT THROUGH TIME
BY ANDREW WALKER (ED), PUBLISHED BY THE SURVEY OF LINCOLN, £6.95
Lincoln’s Brayford Pool has transformed considerably in the past fifteen years, with the development of the University of Lincoln on the south side and the bustling eateries that line the north side. The area now stands in marked contrast to the historical uphill area of the city. These changes are documented in this new booklet, also the most recent title in a series, published by The Survey of Lincoln – a group of locals who have directed their enthusiasm and knowledge for the city towards keeping track of such shifts in print. The area’s archaeology, its leisure facilities and former industrial features, as well as the bridges that have supported the city’s railway lines are all explored in a number of short well-written essays authored by various contributors and there is even a consideration of the representation of the Brayford by artists and photographers. It is a slim, elegantly designed and illustrated volume which is sure to interest a wide range of readers. Unfortunately, two printing errors are present in this printed edition but the intended layout can be viewed online. www.thesurveyoflincoln.co.uk

NEWS
Lincoln Guildhall is the subject of an updated guide book which is intended to give visitors and locals alike an insight into the history of the building. ‘Above the Bow’ takes as its basis a 1990 publication which has been supplemented with new material under the guidance of Henry Ruddock. The book is available from Ruddocks, Lincoln High Street and online at www.ruddocksoflincoln.co.uk

Spalding based historian Alastair Goodrum is soon to release a book which tells the true stories of six teenagers who joined the air force during the Second World War. ‘They Spread Their Wings’ explores the fears and hopes of these courageous young volunteers, through diaries, log books and illustrations. www.thehistorypress.co.uk
Popular Lincolnshire author Margaret Dickinson will be visiting Waterstones’ Lincoln High Street shop on Saturday, 16th February to sign copies of her latest novel, ‘The Clippie Girls’. Tel. 01522 540011 for further details.