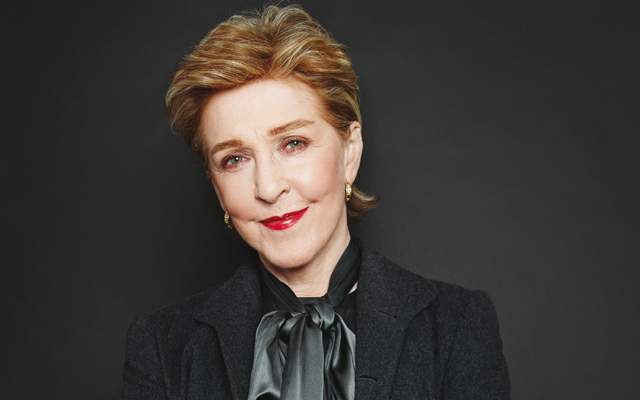 Captivated by the stage

She’s a familiar face of stage and screen with an impressive list of theatre, television and film credits to her name, but Lincolnshire born actress Patricia Hodge says performing in her home county is always the most moving experience.
Best known for one of her more recent roles – playing Miranda Hart’s pushy mother Penny in the BBC2 sitcom Miranda, which has seen her elevated to national treasure status – Patricia tries to return to Lincolnshire whenever she can, but admits it’s not as often as she would like.

The actress, who has appeared in a string of television shows including Rumpole of the Bailey, The Professionals, Inspector Morse, The Legacy of Reginald Perrin and Marple and films The Elephant Man, Behind Enemy Lines and Before You Go, has a busy few months ahead of her.

Having finished filming one of the final three episodes of Agatha Christie mystery drama Poirot, which is due to be screened in the autumn, Patricia has recently completed a radio play too. She’s also been on stage for the Bath Summer Season, where she stared alongside Caroline Quentin and Rory Bremner in the Noël Coward play Relative Values, directed by Trevor Nunn. Hopefully this run will be extended and transferred to the West End.

Patricia, who grew up in Grimsby where her parents ran the Royal Hotel, set her heart on an acting career at a young age.

“I used to go to dancing classes in Grimsby, and was always mesmerised by anything on the stage, it’s just something you can’t explain, but I was fixated with it,” she recalled.

“I didn’t know any expression for it, other than as a hobby, until I went to London when I was ten.

“My mother took me at Christmas-time to see a show called Where The Rainbow Ends – it was a children’s story, a fantasy with ballet dancers and an orchestra; it was amazing – it was a pageant, in those days when they did extravaganzas. I saw all these children acting on the stage from the Italia Conti school and it was then I realised these people did this for a living and that’s when I knew I wanted to as well.”

Despite her ambitions it was several years before Patricia realised her dream and graduated from drama school.

“My parents didn’t want me to be an actress, and living in Lincolnshire, which at the time was pretty cut off, made it difficult,” she added.

“The only performing theatre company was in Lincoln and that closed. There were wonderful amateurs, but nothing else around and I had to look beyond this and wait until I had the strength and wherewithal to take my life in my own hands.”

Having already qualified and worked as a teacher, Patricia graduated from London Academy of Music and Dramatic Art when she was twenty-five and got her first break shortly after.

“You’ve got to have talent to be an actor, and you train for everything – I didn’t aspire to be a film star – probably more the theatre, it was the place that I was drawn to,” she explained.

“I was lucky that I looked quite young for my age. I was twenty-two before I started drama school and was twenty-five by the time I finished, which made me later than a lot of others. Some of them were not mature enough to take on the training; they didn’t have enough life experience or they could not take the pressure and were going into it with completely false expectations. I had the life experience and this is what people wanted.”

Initially concentrating on theatre work, Patricia made her television breakthrough when she won the part of Phyllida (Trant) Erskine-Brown in Rumpole Of The Bailey, which ran from 1978 to 1990.

Roles in a diverse range of shows followed including The Naked Civil Servant, where she starred opposite John Hurt, as Margaret Thatcher in The Falklands Play and in 2007 she took on the part of Betty, wife of tycoon Robert Maxwell in the BBC TV drama Maxwell opposite David Suchet. While in 2008 she stripped off on stage for her role in Calendar Girls.

Nominated for a BAFTA for her role in the adaptation of Hotel du Lac in 1987, Patricia was awarded a Laurence Olivier Theatre Award in 2000 for her performance in Money at the Royal National Theatre.

Despite her continued success, she is disappointed at the limited number of roles available to older actresses, and says the very nature of her career means her fate is ‘in the hands of others’.

“There are far fewer roles for women available full stop,” she said. “You can pretty well guarantee for every ten roles for men, there are only three for women.

“And when you get that and your age going against you, of course there’s a lot less to choose from. It shouldn’t be like that – it’s a filter for understanding ourselves and all aspects of the demographic need to be represented.

“But what it does mean, however, is that the roles that are on offer are often a great deal more interesting.

“You can never predict where life is going to take you – I wanted to be in this profession and the fact I have remained in it is enough.”

Even with such an impressive list of credits to her name, Patricia, who is married to music publisher Peter Owen, with whom she has two sons, still loves returning to her Lincolnshire roots.

She is next due back on county soil in the autumn, when she will be the first speaker of the season for the Grimsby Everyman Club. She also has strong links with the Wintringham Society of Arts (Grimsby Concert Society), a group formed in 1959 by her former headmistress, and the town’s Caxton Theatre.

“Sadly, I don’t get back to Lincolnshire as much as I’d like. My family have all moved down south, although I still have some good friends there, but I only really go back when asked to do something,” said Patricia.

“Lincolnshire’s remained relatively unspoilt. Grimsby was a lovely market town with a wonderful market place, the bull ring, the coffee houses and their smell and there was Chambers where they used to grind their own coffee in the window and where a lady used to play the violin; there were some lovely things, and my connection to Grimsby is unchanging.

“You never forget your roots, it’s part of you. The people are so affectionate there; when I go back and perform it’s so moving, the appreciation – there’s really nothing like it, it’s the most rewarding.”

We couldn’t agree more – having Patricia back on Lincolnshire soil is always a great pleasure for us too.