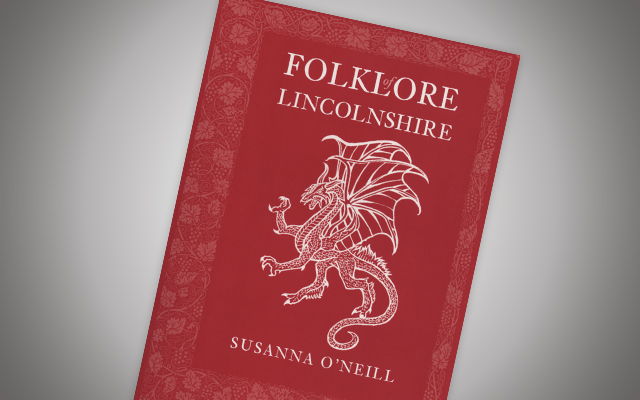 Folklore of Lincolnshire By Susanna O’Neill Published by The History Press £14.99

The public interest in the chilling aspects of our county’s history currently appears to be thriving, and there is plenty to send a shiver down the reader’s spine in Susanna O’Neill’s latest book, ‘Folklore of Lincolnshire’. An essential read for anyone fascinated by Lincolnshire’s mysteries and folk traditions, O’Neill also caters to etymologists and history buffs in a book that will appeal to those previously unacquainted with the rich, centuries-old traditions and tales. With chapters focusing on all manner of fantastical creatures, spectral figures, the heritage of games and song and the curious Yellowbelly sayings that make up our county’s past and present, O’Neill has succeeded in creating a varied, informative and enticing read.

O’Neill uses the famous folk song ‘The Lincolnshire Poacher’ as her springboard to an impressive survey of the colourful lore and language of the county. Written in a clear, accessible style while keeping the chapters lively, with the quirks of the local dialect, a wealth of illustrations and endless curiosities ‘Folklore of Lincolnshire’ takes the reader on an enjoyable journey through the past, across the county and finishes with an imaginative chapter which comprises a calendar of Lincolnshire’s traditions. YS

THE GALLOWS CURSE BY KAREN MAITLAND
Published by Penguin Books £7.99
Lincoln based, best-selling author Karen Maitland has come up with a bawdy, bloodcurdling tale for her latest novel, ‘The Gallows Curse’. Bringing her adopted city into her writing, the book begins during the twelfth century when a healer, Gunilda is dragged up Steep Hill and made to face trial, then burnt to death in front of the Cathedral, for a crime she did not commit.

The story then moves to 1210, with King John on the English throne and the barons a powerful force in the land. The life of a young serving girl, Elena is thrown into turmoil after she is wrongly accused of murdering her infant son. Elena lives and works on a nobleman’s estate. When the young girl finds herself hauled before the new Lord of the manor, accused of murder, she does not realise the extent of the evil forces working against her – for her plight is linked to that of Gunilda, as well as the mysterious estate steward, Master Raffaele.

With a skilfully orchestrated, dramatic plot and Lincoln providing the backdrop to the action at key moments in the book, ‘The Gallows Curse’ will certainly appeal to Lincoln readers unafraid of our bloody history.

A HISTORY OF GRIMSBY ICE FACTORY BY GARRY CROSSLAND
Published by Graeme Bassett for the Great Grimsby Ice Factory Trust £4.99
This recently published pamphlet provides a thorough overview of Grimsby Ice Factory. Not only a historical account, the book includes well-researched chapters on the process of ice making, both early on and during the period of modernisation between 1930–33 when electrically-driven compressors were introduced and the factory as a whole was brought up to date. Readers interested in Grimsby’s historic fishing industry would do well to pick up this short and informative guide. www.grimsbyice.co.uk

BOOK NEWS
‘Mortal Fire’, the debut novel of Lincolnshire raised author, C F Dunn has been published by Monarch. The first in a series of romantic thrillers of the same name, ‘Mortal Fire’ follows the story of a professor of history who has an obsession with an Englishman’s journal that leads her to a secret that should never have been uncovered. Stamford and Rutland will feature in all five books of the series, forming a vital element in the evolving story. www.lionhudson.com

The newly relocated Brigg Library will host Bucolic Frolics – an evening with rom com author, Christina Jones on Tuesday, 12th June. Christina has won the Pure Passion Award and has been shortlisted for the Rom Com of the Year Award. Brigg Library c/o The Angel Ballroom, Market Place, Brigg. Tel 01724 860161 or online at www.northlincs.gov.uk/libraries

Carole Divall will visit Bookmark in Spalding on Thursday, 21st June. Carole is an expert on the Napoleonic Wars and will discuss her latest book ‘Napoleonic Lives’. Essential for anyone interested in this fascinating period of our history. Starts 7.15pm.Tickets for this event are £3.50 to include a glass of wine or juice. Tel. 01775 769231.