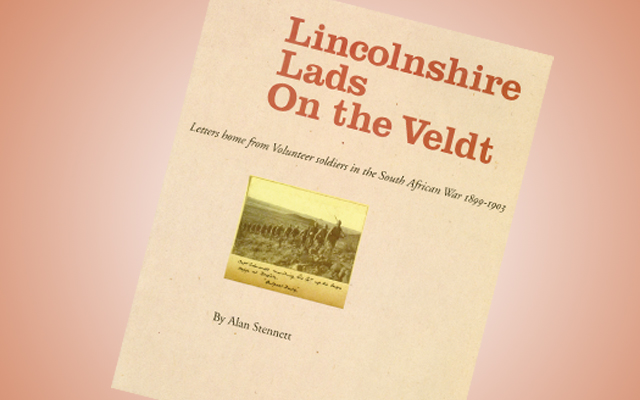 Lincolnshire Lads on the Veldt

LINCOLNSHIRE LADS ON THE VELDT BY ALAN STENNETT
Published by the author, price £11.99 (pbk)

Popular county journalist, historian and broadcaster Alan Stennett here tells the stories of three men who volunteered to help the Lincolnshire Regiment in the fight against the Boer republics, during the South African War at the turn of the last century. Stennett draws upon letters written by his own grandfather, Herbert Stennett and Herbert’s brother Arthur.

While their correspondence is often concerned with updates on their personal wellbeing, it is complemented by reprinted articles from the Lincolnshire Echo – whose reporter Private David Wilkie kept the county abreast of the developing conflict – as well as Stennett’s own account of retracing the men’s steps in 2000. The result is a fine balance of military and family history, supplemented by archival photographs and maps of South Africa. There is certainly enough fascinating documentation here for the book to appeal to readers outside the author’s family – as opposed to many current self-published genealogies which have limited appeal.

The use of local press materials reveals another episode in world history that was clearly close to the county’s hearts. Stennett is already a highly regarded writer and BBC Radio Lincolnshire regular, and this book reflects his desire to keep the local history books rich and detailed. Available from the author. Tel: 01526 352703.

TREASURED MOMENTS BY RICHARD WESTLAND
Published by IdaPearson, Price £24.99 (hbk)
These collected writings reveal first and foremost the lifelong passion for gardening that the late Pat Westland carried through her professional and personal life. Edited by her husband Richard Westland, this very touching tribute to a woman who dedicated years to education is intended both to pass on Pat’s encyclopaedic knowledge of horticulture and to support The Butterfly Hospice Trust.

Additionally, the book showcases numerous other stories, puzzles and recipes that Pat authored over the years. From germination experiments and an illustrated guide to common cone bearing trees, to words of wisdom and brainteasers, this is an enjoyable and informative book that might inspire new gardens to flourish.

OUT OF GRIMSBY BY ALF MAY
Published by Richard Kay Publications, Price £7
Just one of the wide ranging Richard Kay Publications titles available through the Lincolnshire Life bookshop. Spanning the years 1882 to 1932 this book is a family history of Lincolnshire fishermen, beginning with the tragic loss of both the author’s father and grandfather, and recounts the changes in commercial fishing from sail to steam power as experienced first hand. Out of Grimsby also depicts the typically hard life of any fisher family of the era, through the tumultuous years of the First World War and the subsequent Depression. A testament to the relentless grit and determination of our county’s fishermen in tough times and stormy seas. www.lincolnshireshop.co.uk

BOOK NEWS
First time Lincolnshire author Andrew Woolhouse has recently published ’13 – Lucky for Some: The History of the 13th (Lancashire) Parachute Battalion’ after 5 years of research. Utilising hundreds of veterans’ accounts, maps and photographs the book covers the formation from 2/4 South Lancashire Regiment, their training and preparations for D-Day and their subsequent wartime efforts. Royalties for every copy sold online via Paracharity.org will be donated to the Parachute Regiment Charity.

Jack Croxall has just published his debut novel, ‘Tethers’ which is set in Victorian Lincolnshire. It tells the story of two teenagers captivated by a journal that the pair discover. It draws them into a covert and sinister conspiracy. Half of the royalties received from the paperback version of Tethers will be donated to ME Research UK. www.jackcroxall.co.uk

Thomas Harding will visit Bookmark in Spalding on 17th September at 7.15pm to talk about his book ‘Hanns and Rudolf: The German Jew and the Kommandant of Auschwitz’. The book tells of the capture of Rudolf Höss, Kommandant of Auschwitz, by Lieutenant Hanns Alexander, one of the lead investigators of the first British War Crimes Investigation Team.
Tickets £3.50, tel: 01775 769231.