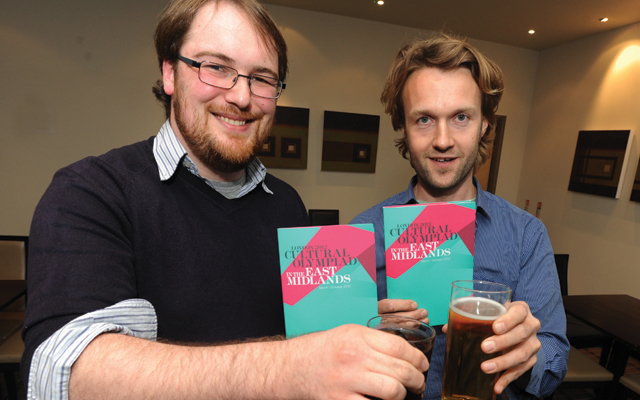 Lincolnshire tales in poetry and song

Capturing the vibrant spirit of Lincolnshire in just an hour would seem an impossible task – but it’s what a team of internationally-renowned writers, composers, illustrators, actors and a ninety-strong choir will be attempting to do in a stunning new production which is the county’s major contribution to this year’s Cultural Olympiad and premieres next month.
Dramatic stories inspired by Lincolnshire have been specially written by leading poets Ian McMillan, Gillian Clarke, Liz Lochhead and Joel Stickley and, combined with powerful words by Archbishop Desmond Tutu, have been used to create a poetic drama featuring original music by composers Gabriel Prokofiev, Tim Dalling and Luke Carver Goss.

The result is what director, Susannah Tresilian describes as a ‘storytelling journey’ through the county which will be unveiled at the SO Festival in Skegness.

There the new works will be sung a cappella by the ninety-strong Choir Invisible – The Desmond and Leah Tutu Peace Choir, which is based at Harlaxton, near Grantham, alongside actors, musicians and a backdrop of images created by award-winning graphic novelist Kate Brown – and it’s hoped the poets will be in the audience to see their fables brought to life.

It’s taken almost two years to bring the production to the stage since executive producer David Lambert, of Lincoln-based arts consultancy Cultural Solutions UK, had the initial idea but the result is a celebration of Lincolnshire life – for instance, Ian McMillan’s story features the legendary Black Dog that’s said to stalk the Fens.

“I knew we needed to do something very special for Lincolnshire for 2012,” said David. “It’s been an amazing journey but right from the start I was impressed by the enthusiasm the artists have shown for it. There seems to be a real affection and enthusiasm for Lincolnshire and for bringing these wonderful works to life and on to an international stage.

The choir’s musical director, Sally Brown said she was delighted they were asked to be involved. “It was always clear that the poets would come up with something incredible,” she said. “Singing an original work is a bit like a ride on a giant rollercoaster but I had absolute faith in Tim Dalling’s songwriting abilities.”

The strength of the creative team was one of the things that attracted renowned director, Susannah Tresilian to the project.

“The list of extraordinary artists taking part in this, both at the creative stage and for the actual performances, is endless – of course I wanted to be involved,” she said. “I was interested in applying my eye to what is unique about Lincolnshire which local people might not think is of particular interest. I wanted to look at what makes Lincolnshire a fascinating county today and celebrate it.”

Golden Fables 2012 is being performed at the Embassy Theatre in Skegness at 2pm on Sunday, 1st July. Tickets are £5 (£3 children) from the box office on 0845 674 0505. It will then be performed at the renowned Latitude festival in Suffolk on Saturday, 14th July.

But if you can’t get along to the live performance in Skegness it is being filmed by Lincoln-based Electric Egg and the film will be screened in Lincoln, Stamford, Gainsborough, Sleaford, Hemswell, Grantham and Spalding in July. Full details are available on the Golden Fables 2012 website www.goldenfables2012.co.uk

Golden Fables 2012 has been funded by Legacy Trust UK, creating a lasting impact from the London 2012 Olympic and Paralympic Games by funding ideas and local talent to inspire creativity across the UK. Other funders are Arts Council England, the European Regional Development Fund and Lincolnshire County Council.

Susannah added: “This is a celebration of Lincolnshire with song, with poetry, with laughs and with genuine affection. I hope people will walk out of the performance feeling nothing less than pride in their county.”