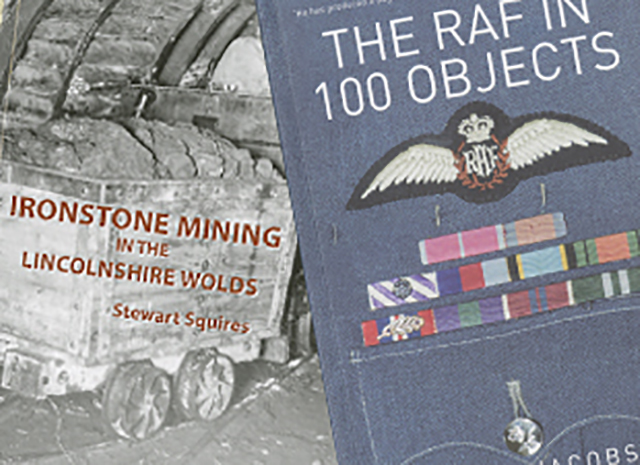 THE RAF IN 100 OBJECTS
PETER JACOBS

Inspired by the format of Neil MacGregor’s book A History of the World in 100 Objects, author Peter Jacobs has compiled this full colour primer in time to coincide with this month’s RAF centenary.

The obvious icons are covered, from Guy Gibson to the Spitfire, but this survey also takes in the founding document, The Smuts Report, as well as technological, institutional and personal curios of all kinds. TE Lawrence’s time at Cranwell and the courageous character of Noor Inayat Khan are among the highlights of the collection. And for the general reader, the technical insights are kept to the essentials.

Jacobs approaches the RAF from a myriad of angles, with the Women’s RAF and the WAAF as much a part of his story as Barnes Wallis’ bouncing bomb. So there will likely be much for even the expert to discover. The role of the RAF in ‘policing’ in the days of Empire has aroused some critical discussion, which along with the often controversial reputation of ‘Bomber’ Harris, Jacobs does not probe too much. There might be a greater willingness for contemporary readers to consider the view from the ground in past operations without being too partisan, or downplaying the achievements of personnel and technicians past and present.

Of added local interest, many of the sources and stories are drawn from Lincolnshire, its museums and bases. The generally excellent design is only let down by the picture quality of a few images.

Following the Cold War era, the entries become increasingly limited to developments in aircraft and weaponry. Beyond the mention of memorials, there are fewer personal stories – even ending on that most impersonal of innovations, the drone. It prompts the thought that there may be fewer public stories of heroism in the next century, as military technology and the terms and risks of conflict change. But this book makes for an informative, imaginative review of the first 100 years, of which Lincolnshire has been such a central part.

IRONSTONE MINING IN THE LINCOLNSHIRE WOLDS
STEWART SQUIRES
The foreword to this new book by Stewart Squires was written by former Lincolnshire Life editor and book reviewer, David N Robinson OBE, who sadly passed away last year. In it he confirms that the author’s research interest was in fact spurred by an article in this magazine in 1971.

Focusing in the main on the history of the ironstone mines at Claxby and Nettleton (with a final chapter on attempts to mine at Walesby), with textbook clarity Squires pulls together a wealth of archival material – written, diagrammatic, journalistic and photographic – to tell the story of how areas suitable for this type of mining were identified in the county, before being excavated and worked over the years between 1867 and 1969.

With accompanying reproductions of geological particulars, geographical planning maps and personal archival materials, Squires explains the development and the processes of mining in the county in as much detail as the available sources allow him. This covers specialist techniques, such as calcining; structural problems; economic considerations that affected the fortunes of the mines; the changes to the landscape and surrounding communities by the operations; and the influx of incoming workers – as well as the perils faced by them in their daily work.

Tours in recent years show an ongoing interest in this subject, but Squires accepts that many of today’s residents will have little idea of the mining that went on. For those who have connections or wishing to get a sense of the makeup of the land that made Lincolnshire a viable spot for such mining, Squires’ book will no doubt take its place as the key text on our county’s part in this industrial heritage.

Published by the Society for Lincolnshire History and Archaeology, Price £15 (pbk). Available from the Lincolnshire Life web shop.