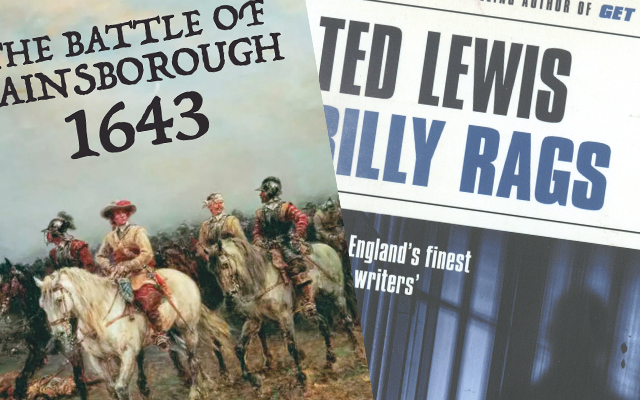 Coinciding with the 40th anniversary of Ted Lewis’s death, No Exit Press has republished two more of his 1970s crime novels, continuing the revival of interest in his work that has followed on from Nick Triplow’s fine 2017 biography.

Lewis drew upon the North Lincolnshire region familiar from his youth in Barton-upon-Humber for his early writing, most famously Jack’s Return Home, which was later filmed as Get Carter. But he was also fascinated by the London underworld.

Billy Rags is a story of three parts, following the attempts of Billy Cracken to escape his life behind bars. The reader is thrown into life on E Wing, where criminal kingpin Walter Colman and the authorities alike continually threaten to undermine Billy’s plans. Lewis is unflinching in his depiction of violent confrontations and much of the action inside is mirrored in flashbacks to Billy’s life on the outside, before everything catches up with him following a daring break out and he is cornered – increasingly unrecognisable to himself but unable to elude all those who mean to stop him in his tracks.

Despite the gritty, tabloid reality of what Cracken is involved with inside and outside prison, and the blunt expletive-filled exchanges one would expect between criminals, Lewis’s writing also reflects a love of literature, and how much power is exercised through language. A library is key to Cracken’s escape. He compares his own movements to evade capture first to a miner as described by Orwell, and later Hugo’s Quasimodo. Meanwhile the inmates, ‘screws’ and Governors try to maintain status through witty one-upmanship, so often twisting one another’s words to gain advantage, or else being vague enough to imply violence, or let paranoia set in. Lewis shows with his perceptive characterisation and his compelling prose how crime, punishment and sentences go together.

The Battle of Gainsborough 1643 by John West

This brief history of the English Civil War focuses on Gainsborough’s strategic position and the repeated attempts by both royalist and parliamentarian forces to capture the town. Author John West provides an overview of both the area and the political climate that led to the violent upheavals.

The Battle of Gainsborough in July 1643 saw colonel Oliver Cromwell distinguish himself against the forces of Charles Cavendish, one of the key events in the rise of this famous figure in seventeenth-century English history.

The story is helpfully supplemented with evocative illustrations of Civil War scenes and portraits of the other key figures involved in the battle for the town. There is also a keen attention to the sympathies of local notables and the financial and commercial impacts on Gainsborough. In contrast to the vivid scenes of conflict, West shares his own photos of what remains of the main battle sites today, with Foxby Hill overlooking Lea Road being almost unchanged. A stone monument was erected here in 1995.

Some of the most illuminating passages, letters written by Cromwell himself concerning the battle and the exigences of the unfolding Civil War, are somewhat inexplicably moved to the appendix. This voice from the past still resonates strongly and further immerses the reader in the action. This space in the book might have been better reserved for the more tourist information style history that West includes of some of Gainsborough’s key buildings, where the relevance to the subject is often forgotten.

West’s clear, succinct narrative of the battle might have benefited further from a more creative arrangement of all the source materials; juxtaposing historical drawings and contemporary town scenes, his own critical commentary and the stirring words of those engaged in the extraordinary events. But there is much useful information here for ease of reference for the general and student reader alike.