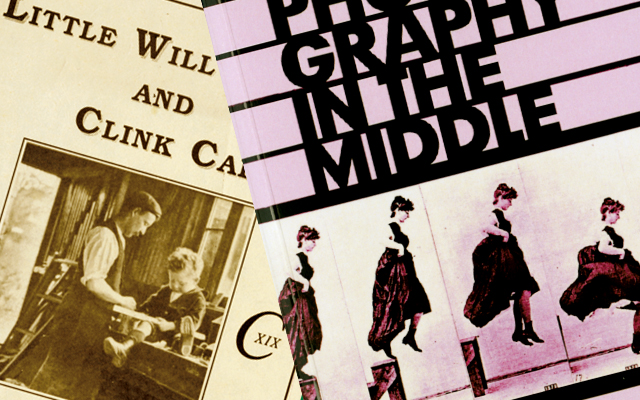 The Lincolnshire Landscape: An Exploration by Jon Fox, which was featured in our November 2015 issue, has been reprinted following a sellout run. The author will be signing copies of the book at Bookmark, The Crescent, Spalding on 10th December 11am–2pm. www.greenploverbooks.co.uk

Lincolnshire based genealogy enthusiast and writer Joanne Major has published a second book with Sarah Murden. A Right Royal Scandal recounts the fascinating history of the irregular love matches contracted by two successive generations of the Cavendish-Bentinck family, ancestors of the British Royal Family. www.pen-and-sword.co.uk

The History Press have released a new Lincolnshire Colouring Book, featuring landmarks and countryside scenes. A great gift idea for those wishing to test their artistic skills and bring the county to life in a unique way. www.thehistorypress.co.uk

PHOTOGRAPHY IN THE MIDDLE: DISPATCHES ON MEDIA ECOLOGIES AND AESTHETICS
by Rob Coley and Dean Lockwood
Published by Punctum Books, Price £15 (pbk)


Taking inspiration from surrealist writers, war photographers and philosophers, University of Lincoln lecturers Rob Coley and Dean Lockwood’s second book questions the nature of reality in an increasingly mediated world. There are speculations as to the weird forces that underlie appearances and considerations of what interventions are left.

Beginning with a historical account of three artists – William S Burroughs, Lee Miller and FT Marinetti – and three vehicle crashes, the authors explore the metaphysical and psychological effects of violent eruptions in the fabric of daily life as a way of glimpsing deeper into the nature of the landscape, technology and society.

The book then enters a mode of creative fiction, with mysterious ‘dispatches’ that move through history, focusing on photographers Don McCullin, Bernd and Hilla Becher and Eadweard Muybridge. With references to dreams, horror and surveillance, Coley and Lockwood use strange coincidences to build a dizzying and often nightmarish picture. Though the book draws on much contemporary theory, it is not altogether impenetrable for general readers, among whom those familiar with the novels of Burroughs, JG Ballard and China Miéville might best appreciate the book.

LITTLE WILL AND CLINK CARROT: TWO BOYS IN LINCOLN
by Peter Gaston
Published by Richard Kay Books, Price £tbc
Soon to be republished following a long spell out of print, the first part of a trilogy of novels by Peter Gaston focuses on the childhood of the author’s grandfather, who grew up in Lincoln in the late nineteenth century.

Little Will is sent out to work in the city for his joiner father at a young age, gathering timber to be used to make coffins. After an encounter with local matchstick seller Lucy, Will befriends another boy, ‘Clink’ Carrot, whose own father is in prison. From this premise, Gaston develops a tale of one young man’s difficult and eventful upbringing, of friendship and family struggles, during much harder times.

The uphill Lincoln area is accurately evoked, including descriptions of the old workhouse, workshops and barracks of Burton Road, and Will’s truculent, tough father cutting deals regularly over lavish meals in the White Hart. Following a riotous funeral scene early on, which sees a horse running rampant through Silver Street, there are humorous and poignant moments throughout – including Will and Clink’s first Christmas together – that will no doubt ensure that Gaston’s books find new readers looking for a sense of a Lincolnshire life in a wholly different era. All three of the titles in the trilogy are available through the Lincolnshire Life webshop.

9/12: ANOTHER DAY
by Donald McDonald
Published by Brewin Books, Price £9.95 (pbk)
County author Donald McDonald’s last novel was set during the First World War and followed young men from their village homes to the front line. His new book follows a US military veteran from more recent conflicts, and the style and subject matter is altogether different.

Joe Solomon is a happily married ex-soldier who has entered the world of banking and soon becomes involved in insider training. When his criminal dealings catch up with him around September 2001, the attack on the Twin Towers offers an escape to a new life. Presumed dead, Joe moves from place to place, job to job, even passing through Lincolnshire. Then he reads about the son he never knew he had.

Readers might not readily warm to a cynical banker, especially one who exploits the events of 9/11. But McDonald takes up the challenge of focusing on such a character, giving an insight into his motives. The blunt, sometimes coarse and jocular style suggests a fondness for hardboiled fiction, and the close attention to local detail reflects the author’s travels.