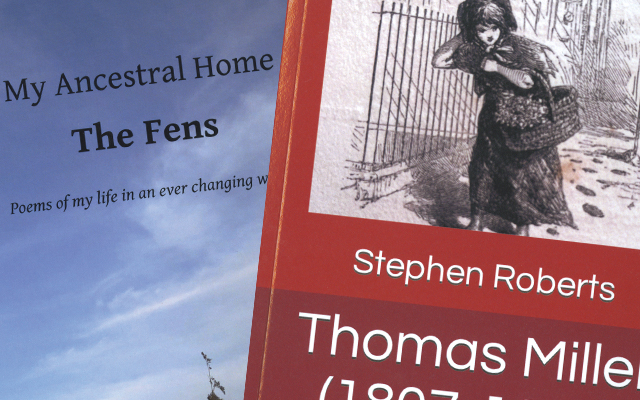 Published under the Lincolnshire Lives imprint, this short study aims to bring Gainsborough born writer Thomas Miller to a wider audience – having been appreciated in the 19th century alongside contemporaries such as Dickens, but largely forgotten since.

Roberts’s opening essay provides an overview of Miller’s life, underlining the economic hardships he faced. A basket-maker who travelled in search of an income to support his wife and children, Miller aspired to make his living as a writer. Despite some small success with A Day in the Woods and his novel Gideon Giles, much of Miller’s output was ‘not what he wanted, but what publishers wanted’. Miller’s story will resonate with many writers today, often unpaid and needing to support themselves with other, often poorly paid work. And his scenes from English life in the Victorian age reveal other dispiriting parallels.

A selection of Miller’s writing – both poetry and prose – follows, showing his capacities for characterisation, most notably through the character of Ben Brust in Gideon Giles, and for his evocative observations of life in Lincolnshire, Nottingham and London. A no-nonsense personality shows through in his love of ale and his denouncement of the ‘cant and humbug going on in the present day of foolish fanaticism and maudlin morality’. Market day in Gainsborough comes to life with its potters, ropers and butchers.

Even more striking and grimly humorous are his depiction of the London fog and lodging houses ‘inhabited by three distinct classes, who are as much separated from each other as if they lived fifty miles apart’, and the unsavoury food offerings of Whitechapel.

Roberts doesn’t nominate Miller for inclusion among the greatest writers of his time but through his detailed research and excerpts makes a worthy case for him as a writer whose vivid descriptions and interest in provincial life might find new, appreciative readers.

My Ancestral Home – The Fens
by Rex Sly

This first book of poems by Rex Sly complements his previous writings on the fenlands. Born into a farming family and having seen the impact of wartime, mechanisation and modern economics on agricultural traditions and the pace of rural life, Sly has collected these verses over his lifetime. They are intended as a lasting picture of his ‘Fen world’ – its drovers and eel-men, reedbeds and forty-foots, ‘banks and cradges manicured’.

Sly zones in on details of flora, fauna and the cycles of nature. Personal tributes are paid to friends and lines are traced to those who lived nearby in centuries past, from Guthlac and the Gilbertines of Sempringham Abbey, to the Bedfords and the higher branches of the Sly family. Many of the poems begin with short notes about their inspiration, valuable in themselves in building a picture of the fenlands’ past and present.

Most of the poems are written in quatrains with a straightforward rhyme scheme, perhaps intended to reflect the predictable rhythms and familiar sights and sounds that have given the author so much consolation through his life.

But over the course of almost 100 poems, it is not the formal qualities of Sly’s writing that will sustain the reader’s interest but rather the poetry inherent in the fenland farmer’s language itself – lodes and leams; slipes and fikes; ‘wash, marsh and mere’ – and the firsthand knowledge and emotion that Sly has to share with the reader.

While much has passed into memory, there are unexpected latecomers to his fen world: the green woodpecker, ‘beak jabbing into sods and turf’, and the marsh harrier ‘soaring and wheeling in the air’. Sly captures the rawness and ravages to the landscape, and the spiritual tranquillity to be found – so it seems all the more fitting when he writes of Martin Fen that its ‘Clouds cleared the mind of doubts and ills’.