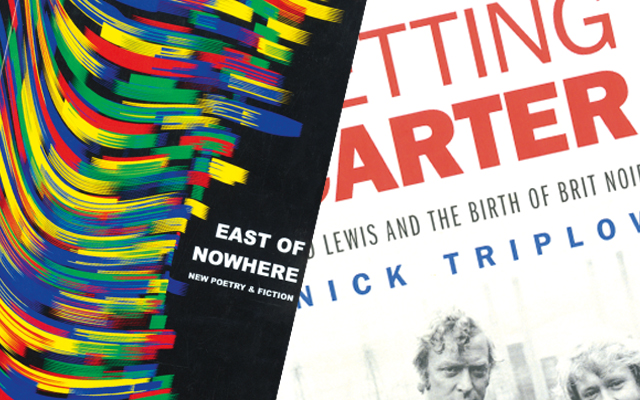 Getting Carter
by Nick Triplow
Published by No Exit Press,
Price £16.99


It is owing to Barton upon Humber raised Ted Lewis’s remarkable blend of hardboiled American noir and post-war British social realism that we have one of the most iconic characters in British cinema: Jack Carter, memorably played by Michael Caine in Get Carter.

Based on Lewis’s novel Jack’s Return Home, the film relocated the action of the original story from the Scunthorpe area to Newcastle. As an avid film fan from a young age, Lewis was proud to see his characters depicted onscreen. But just as director Mike Hodges overlooked the roots of Lewis’s story in north Lincolnshire, so Lewis himself has been generally overlooked in the UK, despite his influence on some of the finest contemporary writers.

Nick Triplow, who also now lives in Barton upon Humber, has produced what is sure to be the definitive book about Ted Lewis, following on from Monty Martin’s short overview published in 2015. Getting Carter goes in depth on all of the periods of Lewis’s life, including his art college days in Hull, his work in advertising in London and a major role in the animation process on The Beatles’ Yellow Submarine film, his problems with alcohol dependence and his return to Barton. Interviewing many of the significant figures in Lewis’s short life as well as consulting local archives and published articles and books, Triplow does an outstanding job in conveying Lewis’s successes and struggles with the recollections he gathers. Triplow’s own knowledge of literature, film and the Humber region only bolster the resulting work.

Triplow pays close attention to the style and tone of Lewis’s writing. Avoiding hyperbole, Triplow also shows clear judgement where Lewis’s writing dipped. As he makes clear, Lewis’s unique voice is apparent in the stark, violent universe that he creates; in its bluntness, its rhythms, and the vivid recreation of local texture – when most British crime writers evoked London or the estates of the upper classes in their conventional murder mysteries. Lewis, too, portrayed gangland characters whom he encountered in Soho but his writing offers much more than cliché. Lewis draws upon the often painful memories, conflicts and relationships of his own life, revealing much of his biography in his brutal fictions. Though he ably keys into the toughness learned from US authors like Chandler, Cain and Hammett, still Lewis’s dialogue is often firmly rooted in the language of north Lincolnshire and the Humber.

Lewis published several other novels before his death at age 42, including two more Jack Carter stories and his acclaimed final novel GBH and also scripted three episodes of Z Cars. He has had a clear influence on younger authors including David Peace, as well as filmmakers Eric Barbier and Shane Meadows. Yet it is an American publisher that is keeping Lewis’s books in print in English, while in the UK he remains underacknowledged as one of the most original post-war writers. Triplow’s solid biography and fine critical analysis ought to ensure that Lewis finally gains the wider readership his books clearly deserve.

East of Nowhere: New Poetry & Fiction
Published by Wild Boar Books,
Price £7
This anthology brings together new writing connected with Lincolnshire, with much of the material rooted in the landscapes of the local area.

There is a pervading sense of anxiety that comes across in many of the contributions. This seems only fitting in such politically uncertain times. Accounts of emotional distance between lovers and personal struggles are interspersed with images of graffitied churchyards and ‘plastic towns’, still feeling the effects of austerity.

Laura Turner paints stark images of a blunt sexual encounter among the nature of the Fens, Fiona Moon depicts the aftermath of a breakup and a festive season spent in the midst of depression, while Cara Wiseman draws the reader’s attention to the poverty experienced by some children in recent years in ‘A Tale of a Poor Boy’.

Elsewhere a black humour shows through. David Rimmington’s addiction is more benign: to vinyl records, while another of Moon’s poems sees Humpty Dumpty suing the council for his wall fall.

The short fiction contributions include editor Richard Daniels’ story of a runner trying to forget the guilt that weighs on him for his involvement in the death of a schoolfriend, which is in keeping with the themes of his recent novel Our Dark Bright Summer. And Simon Hambrook’s account of a desperate night spent locked in a dorm room following a stag night mixes horror and hilarity to memorable effect.

This collection comes just as Wild Boar is preparing to re-launch itself as Plastic Brain Press in 2018. In bringing together many writers from across the area and from beyond, it is proving itself to be a respected outlet for unguarded creative expression and for many thoughtful voices to be heard during a period which is itself bringing fast and often surreal changes.