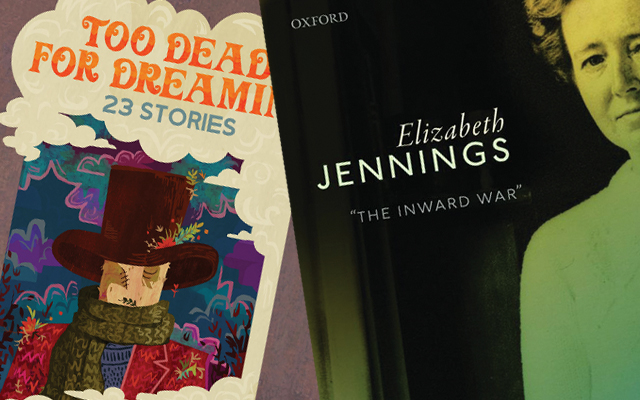 Throughout her troubled life, Elizabeth Jennings’ early childhood years spent in Boston had an enduring influence on her imagination. While she never returned to the area, guarding its significance, she would return to her experiences there in her poetry. Spending the rest of her life in Oxford, Jennings was considered a prominent figure of the Movement group, who shared a stylistic turn towards the rational, and clarity, after the experimentalism of Modernism. Jennings did not accept the tag, though she shared a mutual respect for these and many other of the period’s most notable writers.

Jennings was an unusual figure in post-war literature, deeply committed to her Catholic faith and a woman who lived alone and depended heavily on monetary gifts and temporary accommodation for many decades in which she struggled with mental illness. Never wishing to be defined by these difficulties, she was a prolific reviewer and writer of poetry both for adults and children.

‘The Inward War’ was the title Jennings gave to one of her autobiographies – among her many unpublished papers carefully researched by scholar Dana Greene to produce this first biography.

Greene draws upon a wealth of archives to show how deeply connected Jennings was to the culture of which she was a respected part. All the while, her private life was one of loneliness and passionate, though chaste, devotions to spiritual advisors and benefactors. With a keen attention to contemporary reviews, valuable photographs and details of unseen manuscripts, Greene’s focus is on the autobiographical features of Jennings’ poetry – something Jennings herself would downplay.

The Inward War provides a comprehensive picture of a life of poverty and inner tumult amidst the plaudits and interactions with some of the finest voices of the post-war era. In spite of her struggles, Jennings was a prolific and highly respected writer.

TOO DEAD FOR DREAMING
BY RICHARD DANIELS
Instead of a typical contents page, readers of Richard Daniels’ collection of short stories will find an ‘Order of Service’ but anyone expecting uplifting spiritual hymns will discover tales of the supernatural, the surreal, characters haunted by the past and grim visions of the future.

Daniels’ writing shows the influence of music and film as much as literature, and uses a variety of stylistic approaches, from first person narratives and dark comic sketches, to imagined lectures, a music blog and short science-fiction episodes.

Drab lives are unsettled by unusual encounters, unresolved relationships, or past accidents – with extraordinary scenes seeming to be manifestations of inner conflict or anxieties.

The local sounding Low Scaraby is the setting for many of these stories. Drawing at times on the detail, dialect and texture of the area, while bringing a sense of the occult to the fore, Daniels is able to reflect the influence of the cultural works that have fired his imagination, while evoking aspects of the county with which he is familiar. So the reader finds sinister encounters in a village churchyard and mysterious meetings in a supermarket car park.

There are many tense tête-a-têtes and characters coming to terms with events of the past. The future is given a bleak tinge as well, with one story envisioning a counselling service for those uneasy about embracing an age of augmented reality.

Too Dead for Dreaming shows Daniels to have an appetite for many genres, eras and for esoterica – and in what effects these can be put to, through an unexpected twist or blurring. Often playful and sometimes grotesque, even the weirdest scenes and black wit convey everyday doubts and vulnerabilities and Daniels’ sensitivity to personal searching and reflection amid a violent and strange world.