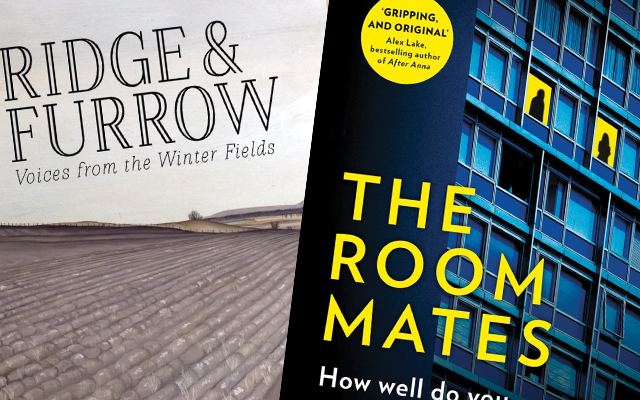 Yusef Sayed’s review of the reads
Ridge and Furrow – By Neil Sentance
The chapter titles of Neil Sentance’s new book suggest that it will concern itself with the years 1940–1990, but each snapshot of a life within is coloured by memories of the past; each of the family relatives whom Sentance focuses on referring the reader back to still earlier times.

Sentance, who was born in Lincolnshire, describes the landscape of the county and the ways in which routines shape personal character – both constraining and ordering. The use of dialect (‘weskit’, ‘kaylied’, ‘onding’), specialist vocabulary, the references to birdlife and depictions of the land and weather evoke Lincolnshire’s people and places vividly.

Our immersion in these lives is helped by Sentance’s finely woven sentences; their own rhythms conveyed in the repeated use of double consonants and the internal rhyming of phrases – ‘The account books were left blank of the unthanked toil’ – almost mimicking the hardness, routine and insularity of the personalities. And though these may be unassuming people, death punctuates the writing in stark images ranging from a brief recollection of liberating Bergen-Belsen to a fierce attack by a bull, and a séance conducted in the 1920s.

Some of the chapters take the reader beyond the county border; to Denmark and a distant aunt’s married life in Copenhagen, and the author’s own memoirs of student days in the Netherlands. But even those who leave find Lincolnshire’s landscape mirrored in the wilds of these other countries, and the historical connections between them.

Sentance’s brief histories are supplemented by black and white photographs that allow the reader to put faces to some of the names that feature.

It is not certain what is fact and what is fiction but it is likely that any reader will feel Sentance’s picture of the past is true to life.

The Roommates – By Rachel Sargeant
While the four central characters in Rachel Sargeant’s new thriller might be ‘freshers’ at university, they have already experienced various upheavals and even trauma in their lives. When one of them vanishes, her remaining housemates work together to find her. In the process troubling memories and difficult family connections loom into the foreground.

Lincolnshire raised Sargeant conveys the uncertainties and confusion of university life adeptly – there’s the physical insecurities of gelling with strangers and the self-doubt that comes with comparing oneself to others; as well as the administrative hassles and muddled arrangements over lecture rooms and course assignments.

The combination of character backgrounds is somewhat bizarre and it is not altogether certain whether they have been determined by plot points already sketched out, or whether the chosen profiles have suggested to Sargeant novel twists in the action (the ability to unicycle, for instance). But Sargeant is certainly aware of the fibs that new university acquaintances are liable to tell, and the search for new identities that interest and action groups on campus encourage – and so the narrative of disappearance, deception and new beginnings that drives The Roommates works well within the atmosphere of a new university term that Sargeant creates.

The unanswered questions will keep readers engaged to the end but Sargeant also shows her skill as a writer in portraying the inner conflicts and lasting pain that upsetting incidents within families can bring about – in particular, the realities for those with missing relatives, and those who have given up their children to the care of others. This gives The Roommates an underlying poignancy that may resonate with a wider circle of readers, not just existing fans of the genre.