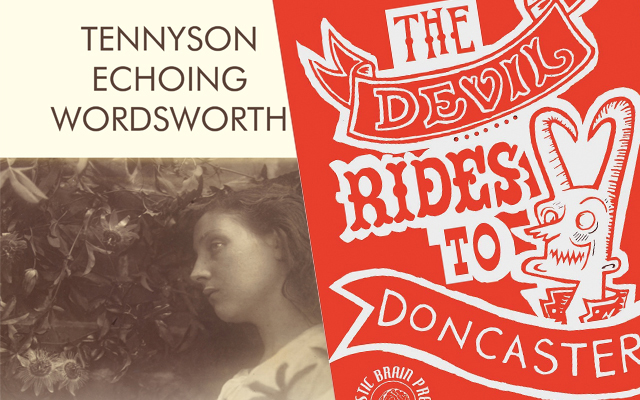 Yusef Sayed’s review of the reads

THE DEVIL RIDES TO DONCASTER
BY MELODY CLARK

The influence of song lyrics, as much as other poetry, is evident, with Clark’s own ‘covers’ of Bob Dylan’s ‘It Ain’t Me Babe’ and C Carson Parks’s (via Frank and Nancy Sinatra) ‘Somethin’ Stupid’ bringing them up to date and shifting their perspective. Horror films also feed Clark’s imagination, while Lewis Carroll’s ‘Jabberwocky’ is given an explicit revision.

Some of the character portraits and tales are accompanied by Clark’s own illustrations.

Clark, from Doncaster, blends the mundane present and the gothic and folkloric – giving her an opportunity to rhyme ‘Scarborough’ and ‘macabre’ – infusing provincial life with the desires and dreams that reading, watching, listening and imagining bring. Part of this inspiration is afforded by the supportive environment of Lincoln’s Angel Coffee House, the subject of one poem, ‘Espresso Earthlings’ and a long-time supporter of the publisher, Plastic Brain Press.

The realities of modern dating do not entirely erase the idealism of the movies. But the vulnerability, honesty, humour and self-awareness with which Clark writes leans as much towards the messy reality of bodily functions and break-ups as it does the excesses of romantic fantasy.

Refusing shame, even in the use of bad puns for poem titles, Clark explores flirting, intimacy and anxiety, her line endings often coming together with the same pleasure and awkwardness as new lovers.

‘Finale’, which depicts love as the most daring circus act one could perform or witness, suggest perhaps the most fitting metaphor to use for Clark’s poetry too, ever on the side of risk, excitement and joy.

Drawing on archives held at the Tennyson Research Centre in Lincoln, among other resources, Jayne Thomas’s detailed study of the Lincolnshire poet Alfred, Lord Tennyson focuses on the various ways in which his work referenced that of William Wordsworth, ‘echoing, reworking, revising’.

Thomas’s approach similarly requires of the reader a knowledge of her predecessors in the field of ‘intertextuality’ – the study of ways in which the meaning of one text is shaped by another. The term was introduced by Julia Kristeva and has been connected with the work of other noted critics, in particular Harold Bloom, another frequent reference point for Thomas.

Tennyson would often downplay, sometimes deny that his poetry contained as many lines from other poets as critics were perceptive enough to identify in his day. What Thomas and others have made clear, though, is that borrowing is characteristic of Tennyson’s work. How this is to be judged – whether as outright plagiarism or as creative dialogue with a history of literature – will be more reasonably decided after a careful study of the two poets, such as Thomas’ book affords.

Even if certain echoes cannot be definitively traced back to a specific Wordsworthian source, this approach to reading Tennyson prompts Thomas to engage with several major works, including ‘Ulysses’ and Maud in depth, teasing out ambiguities, gaining a keener sense of Tennyson’s preoccupations and the richness of language.

Interestingly, another book on the subject of Tennyson’s allusions has recently been published, in which author RH Winnick draws upon the possibilities of digital search tools to identify hundreds more ‘textual parallels’.