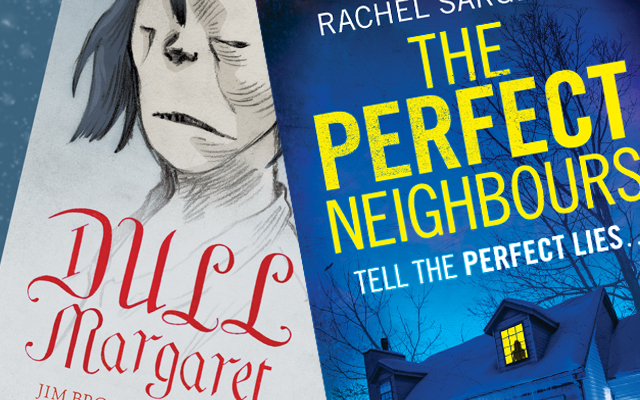 In an unusual career move, county born actor Jim Broadbent has turned his hand to writing, not a memoir of his life on screen but a graphic novel, a first collaboration with the illustrator Dix, best known for his Roll Up! Roll Up! strips in The Guardian.

Dull Margaret is inspired by a figure from Flemish folklore depicted in Pieter Bruegel the Elder’s painting Dulle Griet, a work admired by Broadbent. But in bringing Bruegel’s apocalyptic, vividly painted scene to new, gruesome life, Broadbent has acknowledged the influence of the Lincolnshire landscape of his upbringing on the story.

Dix lifts from Bruegel’s earthy and fiery imagery to create a murky coastal atmosphere. Margaret lives alone in a shack and survives by selling eels to the local townspeople. When she is cruelly tricked out of her money one market day, she vows to take her revenge. Concocting a broth of repellent ingredients, Margaret is given a premonition, that she can have riches or friendship but that she will lose both if she is unwilling to give one up. She soon encounters strange, lifeless figures on the water, familiar faces, whose dead weight nevertheless ignites her affections.

This is a graphic novel in more than one sense, and might not be considered suitable for younger readers. Broadbent clearly relishes telling his narrative in all its visceral, grim details.

Diverging from the macho male world-saving heroics of the more famous graphic novels and comic books, the story is shot through with a primal feminine power and forms a bleak depiction of a hardscrabble existence.

Broadbent does not hint at any novel writing talent in development here, perhaps something closer a storyboard for a film. The language is largely a series of grunts and repetitions of simple words, with Dix’s images foregrounded, carrying the reader along.

THE PERFECT NEIGHBOURS
BY RACHEL SARGEANT
The lives of a group of expat teachers are intertwined in this new thriller by Lincolnshire raised Rachel Sargeant. When Helen finally agrees to join her husband Gary, who teaches at the Niers International School in Germany, she is soon dispirited to find the accommodation less than idyllic and the domineering personality of her seemingly perfect, Stepford-like neighbour Louisa hard to bear.

Soon the impositions and curious behaviour of those around her force Helen to seek an escape at the local swimming baths where she meets the enigmatic and possibly dangerous Sascha. There are secrets and threats beneath the placid surface, with Sargeant creating an escalating sense of foreboding through snatches of conversation overheard.

There’s nothing novel in emphasising the shock of a murderous act by placing it in a privileged, civilised context – as Sargeant does here in the head teacher’s home, with one early image of a blood-soaked, split-necked cello like a visual equivalent of Psycho’s shrieking violin motif. But Sargeant also gets added impact from the surprising incidents and revelations to come by spending so long building a sense of curtain-twitching claustrophobia.

The plot develops from the spring months to a snowed-under December, adding to the sense of atmosphere, even if such devices are somewhat conspicuous. But Sargeant takes the mechanics of a good thriller and invests it with personal experience, having spent years in Germany herself. She evokes both the drab and devastating episodes in Helen’s existence with sharp detail, a cynical sense of humour and rising dread throughout.

A number of characters are developed effectively by Sargeant without the reader being at risk of losing track of any of them. And Sargeant certainly makes the plot twists almost impossible to second guess, but for the merest passing details, keeping the reader turning the page.