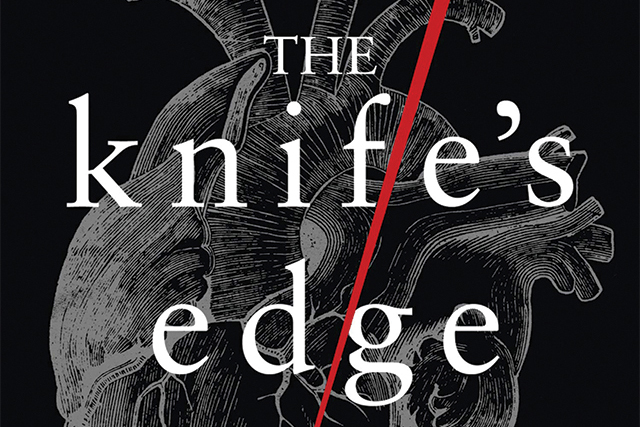 ‘Sleep deprivation underpins the psychopathy of the surgical mind – immunity to stress, an ability to take risks, the loss of empathy. Bit by bit I was joining that exclusive club,’ wrote Stephen Westaby in his 2017 memoir Fragile Lives.

In his new book, The Knife’s Edge, the eminent heart surgeon further considers the factors that have shaped his character and bold approach to his profession. It is not so simple a picture as one might expect, especially knowing Westaby’s background. Brought up in Scunthorpe, around the steelworks, the assumption might be that his no-nonsense attitude and graft were simply the result of the environment in which he spent his younger years.

‘As a boy,’ he recalls, ‘my stoical and religious parents taught me that I should never take risks – never gamble with money, never be deceitful or steal, never cheat in exams. Not even to climb over the wall to watch Scunthorpe United… Consequently, I began life as both boring and introspective.’

Despite progressing as a medical student and trainee surgeon, it was not until an injury sustained while playing hospitals rugby that Westaby displayed a marked shift in personality that he claims has made all the difference in his working life. ‘While I wouldn’t recommend head trauma as a career-enhancing strategy,’ he says, ‘what that head injury did for me in the medium term was quite extraordinary. In place of the wilting violet, I became disinhibited, bold and egotistical.’

The result? A newly self-confident manner that saw him come into conflict at times with management and hospital staff but which also spurred him on to develop remarkable surgical techniques and take risks to save the lives of countless sick patients, some of whose chances of surviving were almost nil.

As with Fragile Lives, Westaby recounts numerous stories from the front line with extraordinary candour and surgical detail. The descriptions of devastating illness, often among young children, is as overwhelming as the complex interventions made with old hospital equipment and scarce NHS resources is incredible. The much-loved and desperately ailing institution is the target of much criticism throughout Westaby’s recollections, both for certain actions taken and inaction elsewhere. The publication of surgeons’ death rates Westaby sees as unhelpful not only in dissuading potential trainees vital for sustaining the public healthcare system but also in misleading the general public and leading to the closure of many children’s heart surgery centres. And then there’s the lack of investment in life-saving technologies – including the rotary pumps he recalled innovating in his previous book.

Westaby doesn’t pull his punches. But for all the talk of arrogance, perfectionism and risk-taking, there is a consideration of empathy as a vital part of his professional life. Unlike the typical ‘psychopath’, Westaby shows a deep sense of gratitude for the love he has received from his family and the joy he has been able to take in moments when the stakes do not demand his utter precision and clinical detachment.

The more one follows his story, the more the details complicate the caricature of the gung-ho surgeon, cutting corners to stitch delicate hearts back together. There is the innate ability Westaby seems to have had for hand-eye co-ordination and dexterity – an artistic capability that he says he also made use of during his school years to paint ‘landscapes of the steelworks of my native Scunthorpe lighting up the night sky, vivid red sunsets as the blast furnaces opened, courting couples kissing under the gas lamps and the steel workers’ grimy faces after a long day in the rolling mills.’

Moreover, Westaby’s confidence has allowed him to give hope to thousands of distraught parents and other family members, hope being that ‘magic word’ that for all the serious failures and difficulties Westaby describes makes The Knife’s Edge a book full of humanity.