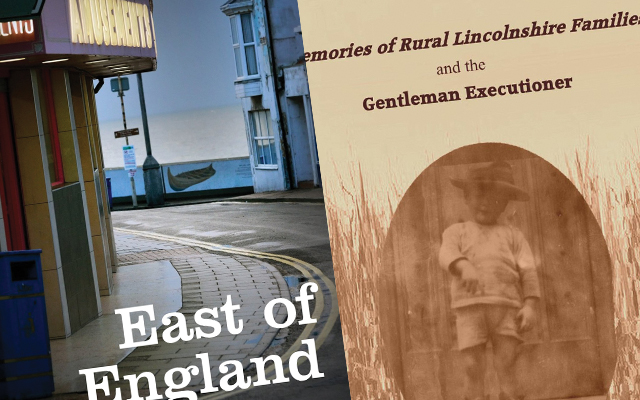 East of England brings to mind the writing of Ted Lewis, whose 1970 Brit noir thriller Jack’s Return Home took inspiration from both the hardboiled writers of American crime fiction and the atmosphere of the Humber region of his youth – the locale being overlooked when Lewis’ character was immortalised onscreen in Get Carter. Griffin here reclaims the region as a viable setting for his own tale of revenge.

Daniel Matlock is just out of Lincoln prison, having served a two-year sentence for vehicular manslaughter. The circumstances of the incident, Dan’s involvement with the Minton crime family, and the disappearance of his father Joe mean that he is soon making noise among the criminal underworld. The name Roy Minton is possibly a nod to the writer of Scum, whose brutal violence Griffin also echoes in the book.

Mixing real and fictional places – Loweth being one nice variation; Skegthorpe, an unfortunate workaround – Griffin, who grew up in the county but is now based in Wales, paints strong images of local surroundings: off-season caravan parks, market days, beachfronts and narrow country lanes – with little of the romanticism of tourist guides.

This, and the dark humour, gives the conventional plotting greater interest. There is one grim realisation that most readers will see coming, but some of the graphic descriptions of fights intended to settle scores might unsettle even those used to crime fiction.

Favouring short sentences, Griffin creates a world of hardened characters often forced to sudden actions and made to cut to the chase. But with Matlock having to sit tight and return to places until those decisive acts that drive the story, Griffin balances exciting forward momentum with a nostalgic evocation of place.

The family histories that author Rosita Bird focuses on in this new book are the result of personal recollections and newspaper articles passed down by her grandfather Moses Clark and great grandfather Amos Grebby. Bird was also aided by Andrew Hunter. For the most part they provide a picture of lives committed to farm labour and to Methodism in the 1800s and 1900s.

With many accompanying images that offer vivid illustration of the branches of four families in particular – the Clarks, Grebbys, Marwoods and Knights – one can put faces to names. There will no doubt be some local readers who will happen upon their own connections; for these the book will be of primary interest.

What comes across is the practicality and resilience of the families, and the scarcity of food and money that they often had to face – though the sense of hardship does not overshadow the light-hearted tales and fond memories repeated down the years, nor affect the obvious pride that the farmers and preachers took in their vocations, the latter travelling from congregation to congregation to share the teachings of John Wesley.

Providing details about the lives of all these families – in particular the changes to agricultural methods and engineering that changed family threshing and farming businesses dramatically – Bird’s book leans more towards a series of first-hand reminiscences and capsule biographies rather than a single narrative. Brief summaries of births, marriages and deaths – and family trees at the end – draw out all the connections but can be difficult for the casual reader to follow, or link to the central figures.

The most famous of these is the ‘gentleman executioner’ of the title, William Marwood. This Marwood is remembered in history books as the inventor of the ‘long drop’ method of hanging and Bird adapts existing material about his life, provided by Paul Hickman, to present the fascinating and controversial facts of his years as a hangman until his death in 1883.