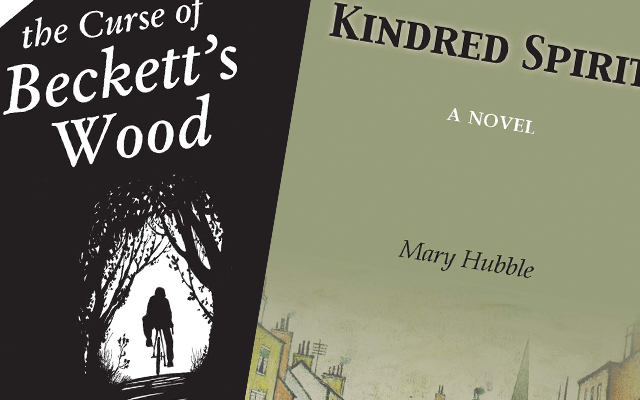 Yusef Sayed’s review of the reads
Kindred Spirits
by Mary Hubble
This recent novel by Grantham based Mary Hubble is told from the perspective of 48-year-old divorcee Clare, who has recently moved to the small Midlands town of Rantersford to begin a new life. There she soon becomes closely involved in the lives of her neighbours, local churchgoers, the members of community organisations – and forms a romantic relationship with fellow chorister, Keith.

Hubble captures many of the activities and events of the day in a paragraph or two. Despite this unusual stylistic approach, she achieves a strong sense of characterisation and manages to draw the reader emotionally into a variety of lives over the course of several months; from a vicar seeking a resolution with his wife, to the noisy couple over the fence, reluctant to embrace many of the facets of modern social life – not least the Portuguese immigrant who has moved in two doors down.

The first-person narrative style of Kindred Spirits in a way reflects Clare’s own stop-start work on a book of reminiscences, for which she has gained an Enterprise Allowance and from which she keeps allowing herself to be distracted by happenings in Rantersford, and her commitment to one role after another – agreeing to help those around her find solace and company.

The difficulties of bereavement, marital strain and domestic violence are handled with sensitivity. Hubble’s dialogue ranges across small talk, gossip, defensiveness and vulnerability, as new bonds are formed and personal difficulties are ironed out with tact and practical sense.

Hubble captures provincial life, through the seasons, with a light touch and humour. What underscores the arguments, tensions and suspicions is the importance of care and love for others. Kindred Spirits is a romantic novel that accepts the many unromantic aspects of everyday life that we all must deal with as best we can.

This strange occurrence is the basis for an intriguing and often shocking three-part story by Grantham writer RE Witham. The Curse of Beckett’s Wood follows Davy Harper as he deals with the trauma of childhood abuse and the cycles of anger and violence in which his existence is continually caught up. Déjà vu, blurred identities and questions of reincarnation create mystery and intense images against a changing backdrop that moves between country life in 1950s Wiltshire and Davy’s career in design in 1980s Nottinghamshire.

At its heart, Witham’s story explores matters of faith. The transformative impact of church singing and private spiritual encounters give Davy vital orientation. Unafraid of exploring the most unsettling impulses, Witham presents harrowing scenes and graphic sexual episodes, as well as employing an extended metaphor for repressed emotions using the imagery of Nazi Germany. While the writing conveys Davy’s feelings with startling effect it is at times drawn out overmuch – as with certain descriptions of working life throughout.

Witham handles the complexity of the narrative skilfully, setting vivid, almost cinematic scenes. And while it might not be suitable for many readers drawn in at first by the supernatural elements, it shows an engagement with difficult and even taboo realities that cannot be avoided altogether.