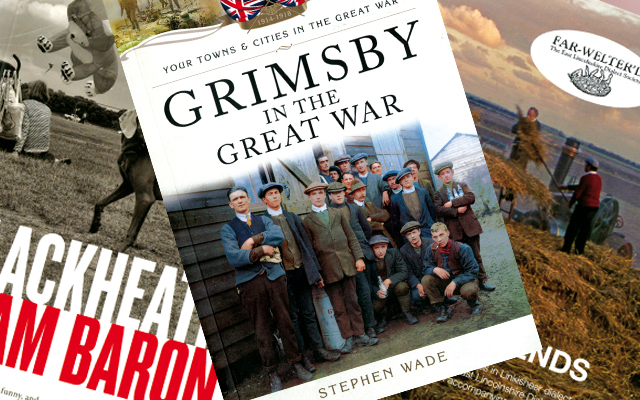 Words by:
Yusef Sayed Featured in:
May 2016
Share Article

Unicorn Press will publish a book by Lincolnshire Life contributor Steffie Shields in June. Moving Heaven and Earth focuses on the life and work of landscape gardener Lancelot ‘Capability’ Brown, who has been the subject of numerous articles by the author and who is being remembered across many special events this year to mark his 300th birthday.

Ulceby author Philip Jowett has been writing military history since 1997. His interest in the armies of Asia in particular has inspired his latest book, China & Japan at War 1937–1945. The book will be fascinating reading for anyone interested in the Second World War, conflicts in Asia and military history enthusiasts. www.pen-and-sword.co.uk

Richard Daniels, who contributed to our Bookshelf page in the March issue, has recently published a novella, The Nobody People. Subtitled ‘A Bloody Brit Noir’, the plot centres on a failed robbery and takes place against the backdrop of Mablethorpe in winter. For more information www.richard-daniels.squarespace.com

Local children’s author Sarah Hindmarsh has won a silver medal in the Wishing Shelf Book Awards. The annual awards are run by People’s Choice Book awards winner Billy Bob Buttons for books published by independent authors and publishers. Hindmarsh was recognised for her debut book The Mouse Who Howled at the Moon. The winners were announced on 31st March.

Grimsby in the Great War by Stephen Wade
Published by Pen and Sword Military, Price £9.99

In his latest book, popular county historian Stephen Wade considers the large contribution that Grimsby made during the First World War. Looking beyond the crucial manpower volunteered by the Grimsby ‘Chums’, Wade investigates many more of the different facets of the war effort that the port town made.

The book is illustrated with numerous black and white pictures, covering such developments of the period as the work of the munitions factory, and including the vital work of women in the Women’s Emergency Corps, and even the aide that musical groups gave by raising money for such organisations.

Wade focuses in on plenty of personal stories among the gatherings of newspaper reportage, bringing the local and national stories together to provide a good overview of Grimsby’s involvement in the Great War.

‘Inder-Ends
Published by The East Lincolnshire Dialect Society, Price £8.95
Far Welter’d is a community group committed to preserving and sharing the dialect of Lincolnshire, or ‘Linkisheer’. This publication is a collection of poems and stories, with bright illustrations, intended to reveal much of the curious and colourful slang that has been spoken throughout the county over the years. Indeed, as the first pages confirm, the particular social history of the county means that there are in fact several dialects.

Including works by established authors, among these the county’s famous Poet Laureate Alfred, Lord Tennyson, alongside contributions from members of the Far Welter’d group, the book offers the reader an immersion into the character of the county’s language.

The book also comes with an accompanying CD so that the proper pronunciation and rhythms of Lincolnshire dialect can be more properly enjoyed.

Blackheath by Adam Baron
Published by Myriad Editions, Price £8.99
Lincolnshire raised Adam Baron’s latest novel focuses on the lives of young middle class parents and is written in the type of lacerating, black comic style that finds its apex among recent authors in the Patrick Melrose series by Edward St Aubyn.

Baron’s characters live relatively less privileged lives, however, and there is here more of the banality and frustration of workaday English life. More specifically, Baron trains his sight on the difficulties of shared parentage, developing a response to the effects of ‘have it all’ aspirations among younger parents today.

With raw and often unsavoury thoughts laid out on the page, Baron clearly intuits that the expectations of modern life mask a profound malaise in many and is not afraid of representing that sense through his characters. Baron’s book shows us how self-interest rubs against duty, and the permanent dissatisfaction and sad humour this gives rise to.