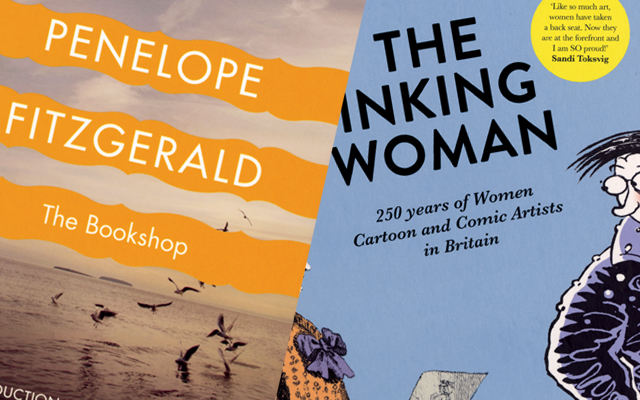 Words by:
Yusef Sayed Featured in:
May 2018
Share Article

Yusef Sayed’s review of the reads
THE BOOKSHOP
PENELOPE FITZGERALD

The Lincoln born writer Penelope Fitzgerald was the daughter of Punch editor EV Knox and granddaughter of the bishop of Lincoln, Edward Hicks. After working for the BBC during the Second World War, Fitzgerald began her literary career at the untypically late age of 58. She was, nevertheless, a recipient of the Booker Prize and a Golden PEN Award before her death in 2000. First published in 1978 and reissued to coincide with a new film adaptation, The Bookshop is drawn from Fitzgerald’s own experience of living in Southwold.

Widow Florence Green invests her inheritance in a small bookshop in the village of Hardborough, in the face of local scepticism and resistance. Renovating a sixteenth-century house that has its own resident ‘rapper’, or poltergeist, and assisted by a primary school child, Florence attracts an enthusiastic clientele before events turn against her. The potential scandal and subsequent hubbub over the arrival of Lolita; complaints about the small lending library Florence introduces; bothersome local artists wishing to display their work and the persistent scheming of Mrs Gamart – who has aspirations for an arts centre to rival Aldeburgh – all threaten the enterprise from the start. Florence’s shop sparks the interest of the village’s oldest resident and recluse, which only fans the small town jealousy. Turning the English village life idyll on its head, Fitzgerald shows the petty rivalries that can simmer below peaceable surfaces.

Like other notable writers with very distinct voices, from US author Shirley Jackson to contemporary Iranian novelist Shahrnush Parsipur, Fitzgerald blends supernatural elements with realism to exquisite effect – with a similarly remarkable attention to cruelties found in the everyday.

A cynical, blackly comic, sometimes chilling, picture develops under the bare light of an understated style.

THE INKING WOMAN
BY NICOLA STREETEN & CATH TATE (EDS)
This compendium focuses on the history of women cartoonists in Britain. It is co-edited by Lincolnshire based graphic novelist and co-founder of Laydeez do Comics, Nicola Streeten and Cath Tate, founder of Cath Tate Cards.

The large hardback book showcases a huge variety of work from the eighteenth century to the present. Many of the works began as lovingly self-published zines or online blogs. Some was intended as ephemeral political commentary. Nonetheless, it is remarkable to see the social impact, and the encouragement illustration has given to so many marginalised voices. Some publications have been an important outlet for many women’s collectives – from those campaigning for universal suffrage to raising awareness about everything from feminist issues, to disability, relationships, caring for family members and living with mental illness. As Muna Al-Jawad says: ‘I think comics are the ideal way to challenge as people don’t see them as threatening and so you can smuggle in a subversive idea or message.’

By turns deeply personal and shot through with barbed humour, this is a perfect introduction to a large number of artists. Also of interest is the way in which a more general scepticism towards comic strips is being broken in the increasing use of graphic medicine, whereby health advice is presented in colourful illustrated panels.

Each artist is represented by a short biographical note, short personal commentary and an example of their work. We learn of Laura Howell, the first woman to illustrate ‘Dennis the Menace’, and the first all-woman team to contribute to the iconic 2000AD – the famous futuristic comic that evidently neglected to see women as a part of the future – in 2016. What is also striking is the number of accounts included here that confirm how so many artists must nurture their art outside of day jobs and other caring roles. For many, the work is a vital outlet.