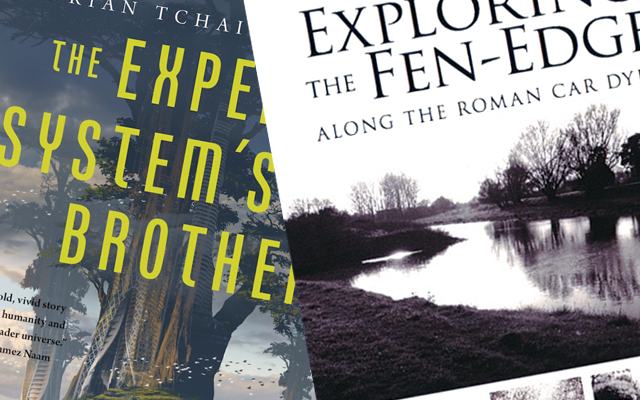 Woodhall Spa raised science fiction and fantasy writer Adrian Tchaikovsky has garnered acclaim for his Shadows of the Apt and Echoes of the Fall series, and an Arthur C Clarke Award for his 2016 novel Children of Time. This novella is the first of Tchaikovsky’s works that I have read, but its brevity offers no less an immersive experience than I imagine his popular series do.

The Expert System’s Brother tells the story of Handry, a boy from Aro, a village closely knit together by the wisdom and traditions of ghosts, which speak through chosen members of the community. Handry becomes an outcast following an accident during a Severance ceremony intended to rid the village of another boy.

Left to fend for himself in the wilderness, he is taken under the care of Sharskin, who claims that Severance is no curse and is, in fact, the key to discovering the true path for his kind, that the ancestors lost.

The ailments that Handry experiences as the world around him becomes hostile, particularly hunger, are viscerally conveyed. The central fantasy element of Tchaikovsky’s story also cleverly mirrors the writing. Just as ghosts speak through the doctors, architects and lawgivers of the villages, so Tchaikovsky’s story takes the form of an allegory. The voices of the book seem to be speaking of the uneasy relationship between conservatism and revolutionary change that Handry, with the aid of his sister, tries to reconcile.

One could also see reflected in the text the conflicts within any religious, social, or environmental movement. Handry’s experience of falling victim to mobs, and later joining one, is powerfully expressed – also apt, in an era of social media shaming and extreme politics.

But just as the strongest characters are able to resist simple orders from the ghosts, so Tchaikovsky’s book ought not to be taken simply as a vessel for a digestible message.

Tchaikovsky convincingly evokes a world populated with grotesque creatures, rituals, vegetation and mysterious technology that reflects a command of the science fiction genre.

EXPLORING THE FEN-EDGE ALONG THE ROMAN CAR DYKE
BY REX SLY
Farmer and history writer Rex Sly charts his journey by car and on foot along the fen-edge between Peterborough and Lincoln, keeping the Roman Car Dyke in his sights along the way, with the villages and the landscape that Sly discovers between fenland and upland inspiring much reflection. The author’s expertise concerning the developments in agricultural methods also means that he is attentive to the changes to the land over the past several decades.

The watercourses, enclosures and settlements that have transformed the county over time go some way to explaining just how the Roman Car Dyke has become so difficult to track. What comes to preoccupy Sly en route are the many churches that speak of so much history.

With a copy of White’s Directory of Lincolnshire and other historical reference books on hand, Sly compares the religious buildings of Lincolnshire’s past with those remaining today. While many of the churches were closed during his travels, Sly is not disappointed: ‘I am, though, a person who likes to be free of time and tide, to wander as and when I please, and take the consequences.’ While he does encounter some individuals and families along the way, such as the Dorrington family rearing their dairy herd at Dunsby, and at end of the book a fishery officer from the EA who guides Sly along the delphs, there is a predominant sense of peace throughout the book. It is a book of much contemplation, with Sly considering the past and the future with fond attachments to what has been nurtured, but no ill feeling towards change.

Interspersed with the travelogue entries are excerpts of poetry, some the author’s original work, and monochrome photographs that document curious details of villages many of us travel through as part of the daily commute without much consideration – and those all-important glimpses of the Roman Car Dyke. The book is available to buy from the Lincolnshire Life web shop.