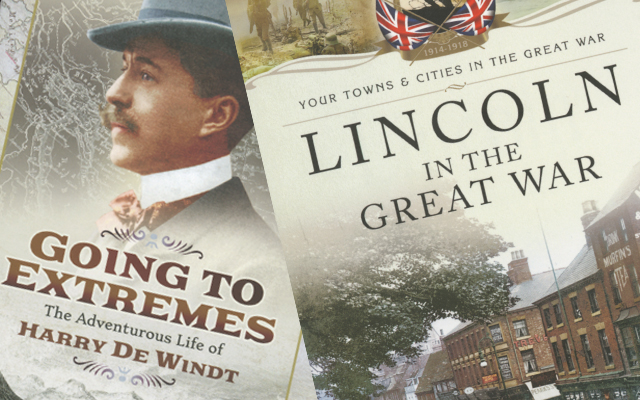 This year’s Lincoln Book Festival will take place 26th September – 2nd October at The Collection. With a focus on history, guests for this edition include Tom Holland and Robert Fabbri discussing the Romans, the Duchess of Rutland speaking about ‘Capability’ Brown, and Robert Bearman and Andrew Dickson on Shakespeare. A Local History Afternoon will take place on Lincolnshire Day, 1st October at 2pm. Tickets for each event are priced £10. Tel: 01522 873894.

The Little Book of Lincolnshire, a new title by Lucy Wood, has been published by The History Press. Full of entertaining and informative facts about the county, ranging from notable figures to features of the landscape, it follows on from Wood’s previous books, The Grimsby Book of Days and Blonde in Deep Water. www.thehistorypress.co.uk

Richard Kay Publications is due to reissue Little Will and Clink Carrot by Peter Gaston in December. The book is the first part of a popular trilogy about a Lincoln family, which has been out of print for some time. All three volumes will be available to purchase through the Lincolnshire Life shop.

GOING TO EXTREMES: THE ADVENTUROUS LIFE OF HARRY DE WINDT BY STEPHEN WADE
Published by Pen and Sword, Price £19.99 (hbk)

Described early on in this biography as ‘the Bear Grylls of the 1890s’, the subject of historian Stephen Wade’s new book offers some parallels: the social backgrounds, the encounters with US presidents. Yet one can confidently say that Harry de Windt’s story makes for more interesting reading.

De Windt not only led the way in the exploration of Siberia and the study of its notorious prison camp system in the nineteenth century – something one wouldn’t imagine any of today’s ‘extreme’ survivalists doing – but also enjoyed a literary social life in the city clubs, being a man of letters and raconteur among such writers as Oscar Wilde – ditto.

Wade traces de Windt’s life across the globe, taking in duties as an aide de camp in Sarawak and race meetings in London, before his extensive, often treacherous journeys across the Russian continent and Alaska. The book revives a time when much of the western world had little experience of such places and a comparative lack of provisions, tools and communication devices by today’s standards.

Though Wade admits his thrill in sharing de Windt’s story with readers, he provides a careful assesssment of his character, abilities and undertakings on the basis of the information he has been able to uncover, which inevitably contains tantalising gaps. Far from hagiography, Wade shares both the illuminating and frustrating progress of documenting this almost overlooked figure.

LINCOLN IN THE GREAT WAR BY LOUISE BLACKAH
Published by Pen and Sword, Price £9.99 (pbk)
‘Too many families found that there were times when finding work to provide an adequate income was virtually impossible, and even those workers with full time employment were frequently not paid enough to keep the family from suffering financial hardship.’ Writer Louise Blackah could be describing recent years in Britain. Here, though, she is describing the poverty that saw so many recruits enlisting for military duty at the outbreak of the Great War.

Lincoln in the Great War is part of Pen and Sword’s series of books to coincide with the centenary of the war, focusing on the reactions of local communities and businesses to the demands and effects of the developing conflict on the continent.

There are devastating realities to be reminded of here. That of the Grimsby Chums who suffered so heavily in the Battle of the Somme, and thirteen-year-old Grantham boy Private Sidney Lewis, who managed to join up with the East Surreys and also fought on the Somme, before his true age was discovered.

There runs through the whole tale the terrible irony of the initial enthusiastic push at the beginning of the war diminishing with the realisation of the huge toll taken on the country and its servicemen – this cannot be glossed over with nice sentiments. This is a sober history, and a concise overview of the county’s responses to pressing realities one ought never to face.

“OH, NO,” SAID ELEPHANT
BY A H BENJAMIN
Published by Michael Neugebauer Publishing Ltd, Price £11.99 (hbk)
County based children’s author A H Benjamin’s new story benefits once again from wonderful illustrations, this time by Alireza Goldouzian. For youngsters of early school years, the theme of the story is dealing with the lack of confidence in one’s abilities. It follows the worrisome title character who is challenged to play several games by his friends monkey, leopard and zebra. Eventually his own special talent is recognised but through success and loss he involves himself with his good humoured companions.

The drawings elaborate on the narrative with strange, surrealist additions and twists, and the inclusion of a fourth character not referred to in the text. This allows readers and parents to build on the story together in their own way.