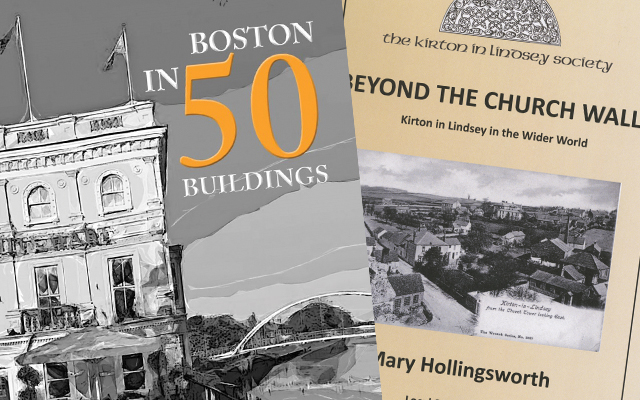 Boston in 50 Buildings
by Neil Wright

This new book in Amberley Publishing’s ‘50 Buildings’ series has been compiled by Neil Wright, who has written numerous books on the county’s history and is an officer of the Society for Lincolnshire History and Archaeology.
Wright provides a brief, informative overview of each building, accompanied by a map of locations and relevant images. While no help is needed in spotting the Stump, the most widely known and seen landmark in the town, only a white plaque read in the midday light indicates the former Blue Coat School.

A date above a door here and – somewhat more extravagantly – a swan atop the former feather factory there, are just some of the details that Wright highlights. Boston’s importance first in the wool trade during the 13th and 14th centuries, and later in the export of grain to London in the Georgian period are behind much of the town’s development, discussed here – as are the place of religion, and local administrative and educational needs.
More than architectural curiosity, Wright’s interest lies in the lives of those whose names are associated with the buildings. The Fydells may be well known, but for whom was Franklin Lodge built?

Many of the buildings have yielded to retail use and housing needs, and even in the cases of those that have withstood the march of modernity, the photographs often show disrepair and neglect – they tell their own story of a town at the centre of 21st-century economic and environmental pressures.

The book ends with Oldrids department store, which closed in 2020 after years of trading as a result of the pandemic, and Pilgrim Hospital which has been of crucial importance in bringing Lincolnshire through the crisis. One hopes that another period of prosperity and restoration in Boston can follow.

Beyond the Church Walls: Kirton in Lindsey in the Wider World
by Mary Hollingsworth

One of two recent publications by the Kirton in Lindsey Society, this overview of the town’s history builds on Laurence Dejardin’s 1993 The Church in Kirton in Lindsey – A History, and looks at how the town has been affected by social and political changes through the centuries. It also draws on a number of out-of-print publications, bringing previous research back into the public domain.

Hollingsworth guides the reader through the major changes in English history, through the reigns of many kings and queens, highlighting significant events in, or connections to, Kirton in Lindsey and its residents – Henry VIII’s sixth wife Katherine Parr, for instance, lived in the town with her first husband.

While the author certainly moves beyond the church walls of St Andrew’s, much attention is given over to the building of the prison walls of Kirton Bridewell in the 18th century. There is much evidence that life in Kirton in Lindsey was harsh, and criminality commonplace but this only underscores the importance of Methodism and the efforts to attend to the welfare and education of the population that came in later centuries. In addition, the prison doctor Charles Frederick George was an early photography enthusiast and it is thanks to him that so many snapshots of the town from the 1860s to the 1990s remain, some included here among a variety of other illustrations.

Hollingsworth’s study ends with a series of images of the Kirton in Lindsey ‘gymkhanas’ of 1908 and 1911 showing a clear party spirit as against the image of a ‘place of misrule’, as described in 1885 by one scholar. There is finally an encouragement to the reader to discover how life in the town developed further and faster in the 20th and 21st centuries, through the oral history preserved by the Society.

Published by The Kirton in Lindsey Society, Price £6