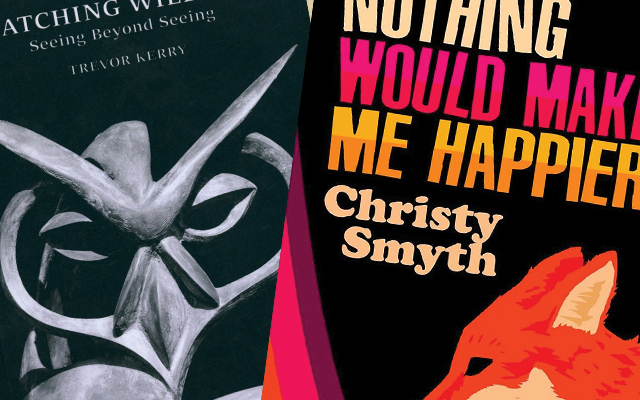 Nothing Would Make Me Happier
by Christy Smyth

This collection of stories depicts a future England living through the unfolding disaster of an emotional pandemic known as the Sadness. As friends and loved ones begin to show signs of intense distress, or else disappear without a trace, those left behind try to make sense of what is happening – and suspicions arise that the government may be taking advantage of a grave situation for its own ends.

Each of Christy Smyth’s dark, surreal narratives centres on a different set of characters: from popular DJs to survivalists; teenage stoners to a debilitated superhero, and employees of the Department of Assisted Suicide – creating what he describes in one story as ‘a scatter graph of misery’, a zombieland of sorts, but with plenty of black wit along the way.

Against a backdrop of constant news updates, late-night discussions across the airwaves and deadpan humour, Smyth withholds key information to build a sense of unease – jokes without punchlines and characters failing to comprehend just what is going on at climactic moments.

The author’s creative use of language is already there in the book title – the sense of enthusiasm conveyed in the phrase ‘nothing would make me happier’ belying the hopeless effects of depression and a sense of nihilism. The title story itself completes the collection with a bleak, haunting vision that encompasses the best of English horror from the BBC adaptations of MR James to the morbid satire of Chris Morris’s Jam.

As with many of the titles published by Lincolnshire’s Plastic Brain Press, the book reflects an enduring fascination with the strange and an attention to the emotional detail and drabness of everyday British life, as well as an acceptance that the ‘new normal’ might be not unlike the old weird – as comforting, or discomforting, as that might be.

Writer and teacher Trevor Kerry is a regular contributor to this magazine’s sister publication The Lincolnshire Poacher. His new book draws on his years as a keen birder, focusing on the variety of wildlife across different regions of the UK from Lincolnshire’s fens and airfields, to the cities of Durham and London, and the isolation of Holy Island.

Attentive to the problematic influences of human development on natural habitats and the significant losses that have occurred over the decades, Kerry nevertheless foregrounds in richly described detail the colourful species of birds, grasses and insects that still populate local areas; how seemingly tranquil woodlands, parks and marshes are home to an unceasing diversity of life. This is conveyed not only through what is seen, but also what can be heard, felt and smelled.

Careful not to romanticise the natural world, Kerry reminds us, ‘Nature is not for the squeamish’. But his evocative prose will encourage non-expert readers to look up all those types of bird with which they are unfamiliar. And with the potential loss of more wildlife, a wealth of language might also go – that of siskins and redpolls; the ‘chack’ of fieldfares, the ‘tzee’ of the treecreeper.

Kerry draws out the comparisons between the aerial movements and conflicts among birdlife and those of our wartime past. In doing so, he not only sees the struggles of human life reflected in nature but also compresses eras, ancient and modern. Against such comparisons, Kerry tracks the finer distinctions of place and season, saying ‘nature’s intrigue resides in its exceptions’; the moors and the fens are ‘differently wild, differently harsh’.

Kerry shows that we needn’t travel to the furthest reaches to find this abundance of wildlife, that it can even be found in our back gardens – if, that is, we give it the chance to flourish.

Published by the author, available from Amazon, Price £12