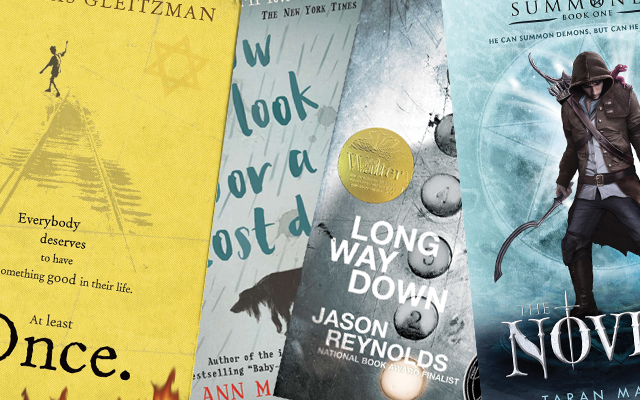 Priory Pembroke Academy is an 11-16 academy located in Cherry Willingham village, three miles east of Lincoln. In this issue, Year 7 and 8 students review children’s books which they firmly believe will appeal to readers of all ages.
Once, Then, Now, After, Soon, Maybe series
by Morris Gleitzman

Gripping. Thrilling. Transfixing. I believe these three words beautifully sum up the Once series.

Set during the Holocaust, it follows the pivotal character, Felix, a 10-year-old Jewish boy whom we first meet “masquerading” as an orphan in a Polish orphanage, as his light-hearted spirit and quick imagination save him from some harrowing situations. He makes friends along the way, and loses friends along the way, but nothing can impact on his high spirits.

Personally, I love these books for the can-do attitude that Felix portrays. He is the embodiment of resilience and optimism. Felix grew up in an era when the whole world turned its back on him. He had no parents to console him, at times no friends to distract him, and no reason to want to help others, but that never stopped him from achieving his dream. Which was? To make the world a better place.

The books teach children never to give up on yourself, while not forgetting who you are along the way. However, it is not just children who would enjoy these seemingly simple – though devastatingly thought-provoking – novels. Based around horrific events that happened at the hands of merciless adults, the series can teach older children and adults never to forget history and to look at what we do know in a different light.

The Once books will capture your heart: I highly recommend them for anyone aged 10 plus. The final book, Always, is published in August.

How to Lookfor a Lost Dog
by Ann M Martin

In this book, written by the author of the Babysitters’ Club series, we follow Rose Howard, an 11-year-old autistic girl who loves rules, homophones and prime numbers and whose only anchor in a confusing world is her best friend and dog, Rain. When Rain goes missing in a storm, Rose is “lost”, too. In this beautifully written and emotional book, Rose gives children with disabilities a character to relate to. I only wish there were more books like it.

A Long Way Down
by Jason Reynolds

Teenager Will seeks revenge for the murder of his brother, Shawn. He has to follow the rules of the hood: No crying. No snitching. Always get revenge. The story takes place in an elevator filled with dead people from Will’s past: his father and uncle, a friend who died in a school shooting and his brother’s murderer. This is a heart-breaking and unusual book whose plot lasts less than one minute and which is written entirely in verse. The ending is a cliff-hanger just exploding with questions.

The Summoner Series – Book One: The Novice
by Taran Matharu

The first book in Taran Matharu’s epic fantasy series, Summoner: The Novice tells the story of a boy named Fletcher who is an apprentice blacksmith and a top notch hunter. He finds a summoning scroll written in Orcish and, as he reads it, light comes out of the scroll and summons a demon. This book is definitely a go-to read: it’s like a cross between Harry Potter and Lord of the Rings. If you’re looking for a fantasy series with a fresh slant, this is the one.