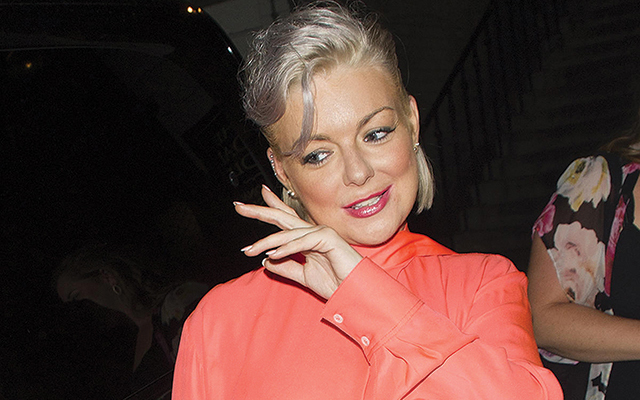 The star of stage and screen has signed with record label East West Records, which is also home to Jools Holland, Robert Plant and Bette Midler, writes Tim Saunders.

It can take a lifetime for actors to establish themselves and to reap the success that Epworth born Sheridan Smith has experienced.

The 36-year-old has starred in acclaimed ITV shows such as the controversial drama Mrs Biggs, and Cilla – for which she won a BAFTA TV Award – and in 2015 she received an OBE for services to drama, awarded by Prince William.

Smith has now turned her attention to a singing career, with her first album, Sheridan. “I am so excited to have signed to @EastWestRecords and will be releasing an album later this year,” she announced on Twitter in 2017.

The star added in a statement: “It has been an ambition since a child to record my own album so I’m incredibly excited to be recording some of my favourite songs.”

Smith comes from a musical family. Her great-great-grandfather, Benjamin Doubleday was a respected banjo player in Yorkshire, who later played as a trio with his daughters. Performing for audiences since she was a child, Smith’s stage experience has included singing alongside her parents Colin and Marilyn, who combined their talents as country music duo, The Daltons. They toured the working men’s clubs near their home in north Lincolnshire.

Smith’s father died in 2016, aged 80, having lost his battle against cancer. That year Sheridan pulled out of an appearance at the Royal Variety Performance and took time off. She has now returned to the limelight, this time showcasing her vocal talents.

President of East West Records, Dan Chalmers, added: “We’re very excited to work with Sheridan, I’ve admired her for many years and she has an incredible voice. Sheridan’s a genuine talent, her fans love her and she’s one of the country’s finest all-round entertainers.”

From an early age Smith studied dance at the Joyce Mason School of Dancing in Ashby, Scunthorpe. She later attended South Axholme Community School in Doncaster, South Yorkshire, only about forty-five miles from Lincolnshire. There she received the highest possible grade in GCSE performing arts. Smith completed further education at John Leggott College in Scunthorpe, Lincolnshire.

Though she never trained at drama school, between 1995 and 2001 Smith was a member of the National Youth Music Theatre, taking lead roles in productions including Into the Woods and Pendragon. She made her West End debut in a National Youth Music Theatre production of Bugsy Malone and has performed in musicals Little Shop of Horrors and Funny Girl. She won two Laurence Olivier Awards for Best Actress in a Musical as Elle Woods in Legally Blonde in 2011 and Best Performance in a Supporting Role as Doris in a revival of the play Flare Path in 2012. Recently she has been nominated for the Best Actress in a Musical award for her work in Funny Girl.

While clearly blessed with talent, it is also a gritty determination that saw Smith, aged 16, leave home to become an actress in London.

Her first taste of fame came in 1999 when she played Emma, Ralph Little’s girlfriend, in hit TV comedy The Royle Family alongside Ricky Tomlinson and the late Caroline Aherne. Two years later she could be found playing Janet in the long-running series Two Pints of Lager and a Packet of Crisps until her departure from the show in 2009. There have been a great many other projects ranging from an episode of ITV’s The Royal to The Lenny Henry Show. She featured as Rudi in the second and third series of the BBC Three sitcom Gavin & Stacey. Smith guest starred in the Christmas 2008 episode of Lark Rise to Candleford. Her appearance in The Moorside, which chronicled the notorious kidnapping of 9-year-old Shannon Matthews in 2008, saw Smith pile on the pounds for her role as Julie.

In 2014, she appeared in the ITV crime drama The Widower as the first wife of serial killer Malcolm Webster. Later that year, she featured in the series Who Do You Think You Are? and played Cilla Black in the three-part ITV drama series Cilla.

In 2016 Smith began filming for a new feature film The More You Ignore Me based on the novel written by Jo Brand, in which she will star in as the main character Gina. The release date is yet to be announced. In 2017, she also starred as the evil stepmum Sheila in the television adaptation of the bestselling children’s book Ratburger, written by David Walliams.

Smith is a dog lover and “one day would like to have a family,” she told the Daily Telegraph.

Her brother Damien was born in 1977 and is lead singer of the band, The Torn. He appeared on BBC’s The Voice in 2015 but frustratingly lost his voice prior to his performance. Sheridan’s oldest brother Julian, born in 1971, tragically died from cancer in 1990 aged just 18.

“For as long as I can remember, I have always just wanted to make my parents proud, to somehow distract them from losing Julian,” she told the Daily Telegraph.

When Smith was filming Mrs Biggs she met the real Mrs Biggs, Charmian. Ronnie fled Australia for Brazil, leaving Charmian and their three sons behind. Then their eldest son, Nicholas (10), was killed in a road traffic accident and Charmian wrote a letter to Ronnie breaking the news.

“Charmian invited me to her home in Australia and showed me the letter Ronnie sent back,” she told the Daily Telegraph.

“It was totally heartbreaking. From a personal point of view, the whole business of the little boy’s death was almost unbearable for me. It hit an awful raw nerve. It made me look at feelings which I thought I’d pushed away a long time ago, but which I realise now were just there, beneath the surface. I immediately thought of my mum. I wanted to ring her, but at the same time I didn’t want her to relive all those feelings. I suddenly saw it all from a mother’s point of view.

“It was bad enough for me to lose my big brother but, for a mother, could anything ever be more terrible than losing her child? I can only imagine what my mum – and what Charmian – must have felt. I was a wreck for a few days when we were filming those scenes.”

Smith was honoured with her own television show towards the end of 2017, where she performed songs from her new album accompanied by a live orchestra. Smith also spoke about her life and career.

“With such a stellar career as an actor, it’s easy to forget that Sheridan is also a wonderful singer,” said Lee Connolly from ITV Entertainment. “With brilliant performances in ITV’s Cilla and as Fanny Brice in Funny Girl, it reminded us why Sheridan is such a special and unique performer.”