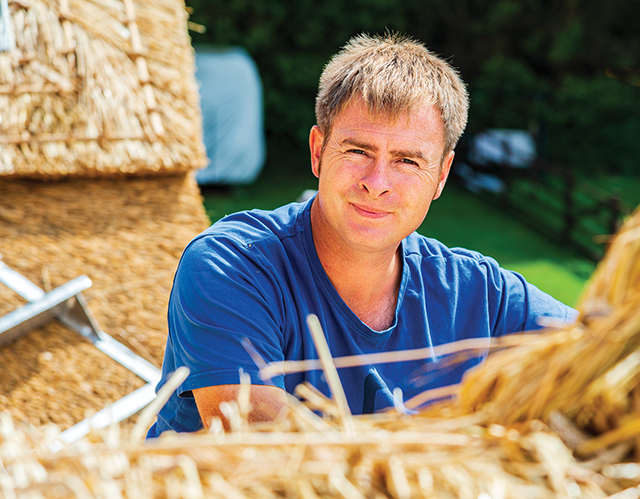 A century of thatching under one roof

Matt Limb OBE looks at the work of thatchers in modern day England, and a family that has practised the trade for the past century, with some surprises along the way.

It must be the most iconic vision of Englishness. A white-painted cottage with flowers around the door, under a traditional thatched roof. It is a scene that must have adorned more chocolate boxes or tins of biscuits than any other – it simply reads, an English summer. But has the day of the thatched roof come of age? Have modern materials used in the building trade replaced the need for straw and is there a place today for the master thatcher?

Lincolnshire, as a county, has its fair share of thatched buildings. Over the years I have often admired them and even drunk a few pints of beer sat in them. But a recent trip to the south of the county found me at a cottage with master thatcher, Chris Dodson, working on a new roof. The building was a former farmworkers’ cottage, built sometime between 1730 and 1750, when it would have been thatched. The current owner showed me a photograph dating back about 40 years, when it is shown with an asbestos roof, surrounded by lettuce plants – he even pointed out the former lettuce packing shed in the corner of the yard. Now with a modern extension, the cottage is a very desirable family home, but in need of a new thatched roof.

As I sat watching Chris and his team working on the roof, I was reminded I was watching a skill as old as the building itself. As a fourth-generation master thatcher, it was soon evident Chris is passionate about his trade. “Thatching is in your blood,” he said as I perched on the top of a ladder leaning against the recently placed water reed. But sat on the ridge, I was nowhere near ready for Chris’s story that followed; a family history of thatching dating back to World War One, acts of bravery, of sons following fathers as master thatchers, for almost a century, without a break.

Chris’s great grandfather William was born in the autumn of 1889. On leaving school he worked as a farm labourer. But he had a great sense of duty, which may have come from his father having served in the Boer War. William joined his local territorial battalion before the outbreak of war in August 1914. But I am sure none of the training he received would have prepared him for 1st July 1916, the first day of The Battle of the Somme – the turning point in The Great War for the Allies and a day when they would suffer over 57,000 casualties, the highest on any day during the four years of conflict. That day, in France, William found himself in no man’s land with a small group of men, as his sergeants were held back by the enemy’s fire. With no hesitation he led an attack on a German machine-gun post that was stopping their advance and succeeded in its capture.

His leadership and bravery were recognised with the award of the Distinguished Conduct Medal. William survived The Battle of the Somme and the war, finally returning home in 1921, following service in Italy and Egypt, now in the rank of sergeant. But he was a changed man. William no longer wanted to return to being a farm labourer. Not sure what he wanted to do, he started helping a local thatcher, so starting a family line that would last for a century. Established in his new calling, he married Alice and they had five sons and a daughter – in turn, all five sons would follow William as thatchers.

William and Alice’s middle son, Ralph, worked with his father between the wars. Chris recalled to me Ralph’s story while working with William as Anthony Eden, in his radio broadcast, announced that Britain was at war with Germany. As the broadcast finished Ralph and his father cycled home. William, ever conscious of his patriotic duties, put on a suit and reported to the local police station to join the Local Defence Volunteers, the forerunner of the Home Guard.

Ralph, who was Chris’s grandfather, thatched his first straw stack on his own aged just 11, recalling stories of being paid a penny a tail for every rat they caught and explained that thatching became a protected trade during World War Two, as they were seen as vital to agriculture in helping to feed the nation. Remembering that farms of the day did not have the large, prefabricated barns of today, hay and straw stacks would have been outside and required thatching for protection. With time Ralph married Jessie and in turn, they had a son and a daughter – their son, Clive, again following his father to become a master thatcher.

Taking a breather and sitting with Chris, enjoying a cup of tea, I asked him if there was a place for a traditional skill like thatching in today’s building industry? I was surprised at Chris’s reply that some 97% of thatched properties are listed buildings, like the one he was working on. So, whilst there may not be as many practising the trade as there were in his grandfather’s day, there is still a growing need for thatchers, as the number of listed buildings is not going to reduce. Plus, there is a steady growth for a thatched roof on new builds; often the new executive modern house which has secured planning permission in an area where new builds require a thatched roof to fit into the village environment.

Pouring another cup of tea, Chris also highlighted the environmental benefits of a thatched roof, with its minimum carbon footprint given the natural materials involved. When I asked how long a thatched roof could be expected to last, the variation between water reed, which he was working with, or straw is the main difference. Straw, depending on the type, could be expected to last for about 40 years whereas water reed would last for another 10 years. But there are stories of a good thatch lasting a century. Other local factors would impact this, the main one being the environment. Exposed to wet conditions, the thatch would need replacing sooner. Another effect is trees and falling leaves, which can cause lasting damage, and a surprising consideration was the actual steepness of the pitch of the roof.

Talking about the materials used in thatching, the main two are straw and water reed; most of the straw is grown locally in the east of England, where old and traditional types of corn are used. Here the aim is to grow a long, strong stem with the grain looked on as a by-product – how different is that from the modern-day farmer looking at his yield per acre? The cereal is grown purposely for thatching and harvested with a traditional binder to protect the cut stem. Regarding water reed, this is harvested across the North Norfolk coastal areas, but it still requires imports to satisfy the demand of today’s thatchers.

From what Chris told me, there is, if anything, a growing need for thatchers, to which he nodded in agreement, but is there a succession plan in place to train the next generation of thatchers and what is the normal route to qualify? Not surprisingly, just as Ralph learnt from his father and with time Clive from Ralph, that tradition of passing on the skill through the generations is the most common method of training. It can typically take five to seven years working alongside a thatcher on a training scheme to be seen as competent in the trade. But it’s not for everyone, said Chris, and many that start do not finish. Few are aware that it can be a very messy and dirty occupation, especially when you are ripping out an old roof, which can be full of dust and dirt, plus you need a good head for heights.

As the generations moved on Chris followed his father Clive as a thatcher, while Chris’s twin brother Andy followed the other Dodson vocational path, serving a full career in the Army. On retiring from military life, Andy became a university lecturer, and is currently working on his doctorate specialising in construction management, with a dissertation on thatching materials. Chris now has a small and dedicated team in Tom and Sam working with him. Like the previous generations, Chris is passing on his knowledge and skills by training this next generation of master thatchers. As I looked up to the ridge there was the last member of the team, Chris’s cocker spaniel Molly, who accompanies him to work most days and will happily sit on the roof watching the world go by.

I left Chris with a much clearer vision and understanding of thatching today, it is without doubt a traditional talent and must rate as one of our purest artisan occupations. It is a skill that will be needed for many future generations to support the vast number of listed buildings, but also to help stop some future developments from being unsightly and dare I say it, carbuncles. Like so many of our inherited skills, a career in thatching will not suit everyone, it takes something special – as Chris said, it is in your blood and admits he earned this respect from his forefathers. But a century on, thatching is in safe hands while people like Chris deploy their skills and in turn pass that expertise and knowledge on to the next generation.

To learn more about Chris Dodson go to www.chrisdodsonthatcher.co.uk