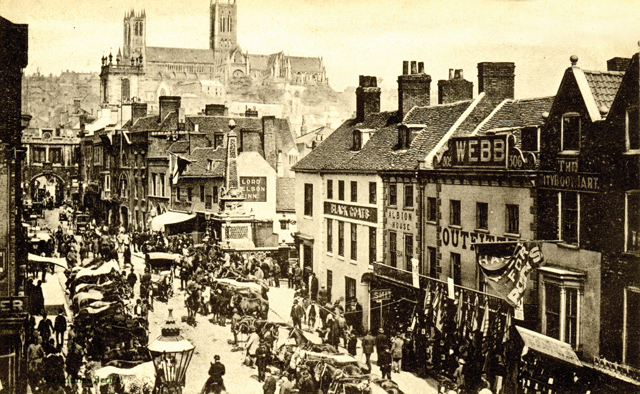 A look at a bygone age… the Lincoln Horse Fair

Mechanised transport has brought great benefits to most of us but has also robbed us of some much loved events of yesteryear. In days gone by most cities, towns and larger villages prided themselves on their horse fair.
The horse fair is a centuries old tradition which was at its peak in the Victorian era and what a magnificent spectacle it must have been – I find the pictures so evocative.

The annual Lincoln Horse Fair was held during the last week of April and also included a sheep and cattle market which took place behind the Grandstand on the racecourse. But the highlight of the week was the horses and Lincoln’s horse fair was described in Whitaker’s Almanack as the ‘Greatest fair in England’.

On the Monday and Tuesday horses stood on both sides of the High Street from the Stonebow to the railway crossing and when the fair was at its peak the horses spilled over onto the Cornhill and into St Mary’s Street. On Wednesday the horses were moved to Broadgate and the fair continued there on Thursday and Friday.

In 1828 the Stamford Mercury described the event as follows: ‘The first signs of our approaching April Fair are beginning to be seen and a few horses are chaffered for in the inn yards. This, with the busy preparations in cleaning, painting and washing, and dashing the fronts of houses mark that something is near at hand which will change the dull monotony of life in Lincoln into a very different affair. Jews, foreigners and Blackguards of all complexions are dropping in and placards on the walls caution the gentle and simple to be on their guard against persons of super abundant cunning and scanty honesty, some of whom, according to the printers bill, even have the garb of gentlemen.’

So the fair was not universally popular and it is true that it attracted its share of large and small time crooks, as any gathering of this nature – where lots of cash changes hands – is likely to do. But it was loved by many as a lively event to brighten up their drab lives with its carnival atmosphere.

They loved to see the visitors dressed in a variety of colourful costumes, loud suits, leather boots, bright neckerchiefs and speaking in a medley of dialects and languages which made Lincoln look and sound like a continental city for a week.

In its heyday during the nineteenth century 800 or 900 horses could be sold on the first day and the fair brought visitors not only from all parts of England, but from Ireland, France, Germany and Belgium. The hotels and inns were packed and the city centre was full of life and bustle. Horses were constantly trotting up and down the middle of the High Street so that would-be buyers could see them in action.

Almost every hotel yard was lined with straw to provide a home for horses for the week. Some of the less scrupulous dealers had a trick of putting ginger round the rear end of the horses to make them appear more alert and attract a better price.

As motor traffic increased in the High Street the fair became a problem and in 1929 it was moved to the West Common. During the war it was moved to the cattle market site on Monks Road but returned to the West Common afterwards; however, the end was in sight. In 1951 only six horses were offered for sale but in 1952 not a single one and the Lincoln Horse Fair was duly ended – mechanised transport had won.