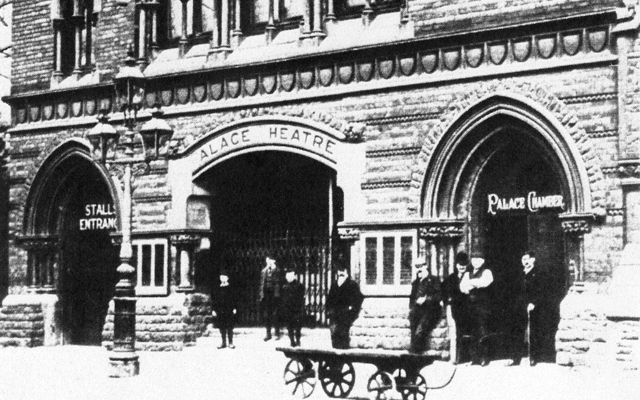 The mere mention of the Palace Theatre may stir some wonderful memories amongst our more mature readers; old-fashioned variety shows, colourful pantomimes and the occasional melodrama, but many of our younger readers will probably have never heard of it.
The building, on Newland in Lincoln, with an interesting façade and interior in the Victorian Gothic style, was built in 1872 as a Masonic Hall. Five years later it was altered to adapt it for “operatic and dramatic performances”. For a time it was used for its original purpose as well as for concerts, patriotic entertainment (this during the Boer War), boxing and furniture sales. The hall proved to be something of a liability for the Masons, who found it too big for their needs, so they moved to other premises nearby.

Eventually, in 1901 it was reopened after extensive alteration, as the Empire Theatre of Varieties. The new proprietor was Mr G H Beagle, an interesting character who, in addition to this venture had opened a “cut price grocery shop”, in upper High Street, a sort of forerunner, on a smaller scale, to the supermarkets. However, this venture, Beagle’s first into the world of entertainment, was short lived; audiences were poor, despite the issue of many free tickets and the enterprise failed. Unable to stem the losses he was forced to sell the premises to Mr F McNaughton, the owner of a chain of theatres and the building was reopened on 6th January 1902 as a vaudeville house known again as the Palace Theatre.

Victoria Monks, a great comedienne of the day was booked for the opening week and other stars to appear as time went on included, in 1916, Gracie Fields and Arthur Pitt in a review called It’s a Bargain. Gracie was nineteen at the time and a local newspaper described her as a “low comedienne of extraordinary powers who was instantly on good terms with her audience”.

Other well-known names who appeared during this period included Harry Tate and his ‘Flying Machine’ and George Formby. The theatre featured local pantomimes in the early years starring Arthur Newstead and Dolly Houldsworth and other popular amateur and semi-professional players, as well as repertory shows by Frank H Fortescue who presented old-time melodramas such as Maria Marten and Sweeny Todd the Demon Barber of Fleet Street.

The staple fare however, was variety and reviews which attracted a loyal and regular audience. Some of the pantomimes presented by professional companies are said to have created an air of magic and mystery in the minds of the younger members of the audience with their elaborate stage settings, while the atmosphere of the building itself with its mock gothic architecture always made an impression on the children.

The commissionaires and attendants with their heavy moustaches and gold braided uniforms and caps presented a powerful and authoritative image. The Palace Theatre continued to present variety until 1930 when declining business again forced it to close. The last show was a vaudeville burlesque, Lincoln Calling. Once again there was a change of ownership and after more alterations the building reopened on 26th January 1931 as the Plaza Cinema with the film Song of my Heart, starring John McCormack. The cinema continued with considerable success until a disastrous fire on 23rd May 1943 when it was struck by an incendiary bomb. It was not possible to rebuild owing to wartime restrictions and the building stood in ruins until it was demolished in 1953. Eventually an office block was erected on the site, which is now home to the Chartered Accountants, Wright Vigar.