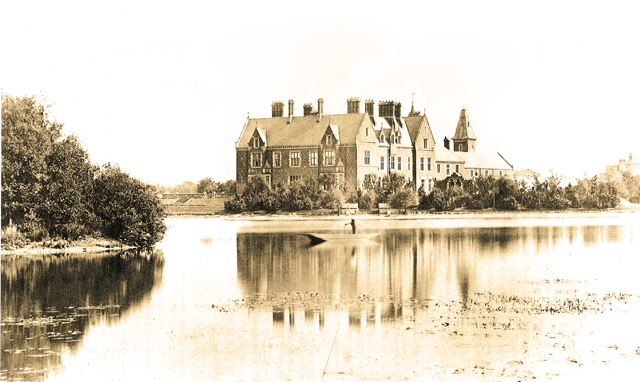 Hartsholme Country Park is a popular destination for visitors and locals alike, but many will be unaware of its history. Unlike many country house estates, Hartsholme was not created by one family, but developed gradually over time.
The first development on the site was a lake created by the Lincoln Waterworks Company in 1848 to act as a reservoir for the provision of fresh drinking water to the City of Lincoln. The lake covered twenty-five acres and held 23 million gallons of water.

Joseph Shuttleworth was one of the founders, along with his brother in law, of the engineering company Clayton and Shuttleworth, who opened their foundry at Stamp End in 1842. They helped to revolutionise agriculture with the introduction of such things as the portable threshing machine and the grinding mill. In 1862 Shuttleworth was living on Newland and on the lookout for land on which to build a house appropriate to his status as a leading industrialist. He had earlier tried to buy Newstead Abbey in Nottinghamshire. When he saw the site at Hartsholme, with its ready-made lake and woodland he thought it ideal and bought it.

The architect for the hall was Francis Henry Goddard and the house was in gothic style, built in brick with stone dressings. The north end faced the lake and the long service wing stretched out to the south towards the stable block. There was an island in the middle of the lake and a gothic boathouse built in 1881. The stable block and the boathouse remain.

There were glass houses, workers’ cottages and lodges at the Doddington and Skellingthorpe edges of the site. The gardens were laid out by Edward Milner, a well-known landscape gardener of the time who later designed the arboretum in Lincoln. In 1871 Shuttleworth bought the Ongley estate in Bedfordshire and built another house there, which became his main residence. He died in 1883.

For a while his son Alfred lived at the hall but by 1892 Nathaniel Clayton Cockburn was living there. However, he had moved to Harmston Hall by 1900 and Hartsholme seems to have been empty for some time after that.

In 1902 it was acquired by Colonel T W Harding, who installed electricity before moving to his family home near Cambridge. In 1908 it was bought for £16,250 by Lord Liverpool, a man with an impressive military career who at the time was State Steward and Chamberlain to the Lord Lieutenant of Ireland. From 1909 to 1912 he was Comptroller of the Royal Household and from 1912 to 1920, Governor General of New Zealand. When he and Lady Liverpool returned to Hartsholme they were welcomed at Lincoln Great Northern Station by the mayor and other dignitaries and escorted to Hartsholme, which was decorated with “Welcome Home” banners and flags.

On arrival they were cheered down the drive by staff, tenants, allotment holders and many villagers from Skellingthorpe. They were clearly much loved.

Those employees who were abroad fighting in the First World War not only had their wages paid in full for the whole period, but their jobs were kept open for them and they received parcels from Lord and Lady Liverpool every week.

The Liverpools moved to Canwick Hall in 1939 and Lord Liverpool died in 1941. During the Second World War the whole site was used for military purposes and afterwards the hall was occupied by squatters who left it in a very poor state. It was bought by Lincoln Corporation in 1951 who briefly considered converting it to a home for the elderly, but the damage was too great and it was demolished.