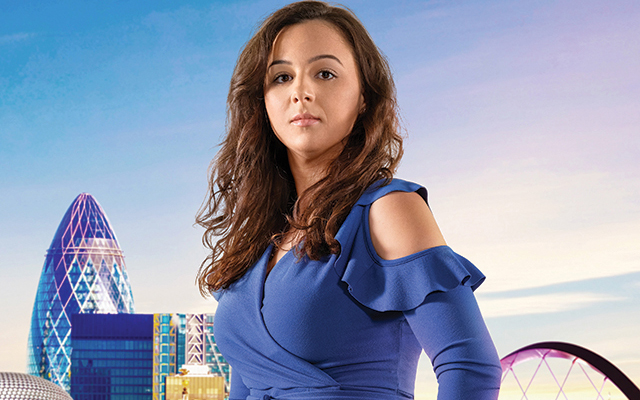 Battling it out in The Apprentice boardroom

She’s been running her own company for three years and now Khadija Kalifa tells Kate Chapman she is hoping to secure the ultimate business deal by winning The Apprentice 2018.
The mum-of-two, from Bourne, has already won several awards for her eco cleaning company Opal and Pearl and in 2018 was one of the sixteen budding entrepreneurs battling it out in the boardroom to secure a £250,000 investment and a partnership with Lord Sugar on the BBC One show.

Billed the biggest and best series yet, it saw the candidates jetting off to Malta tasked with buying nine specific items at the lowest possible price, clinching deals at the Body Building Expo and creating their own comic in just twenty-four hours.

Khadija made it through to the last five but failed to make it through the gruelling interview process. Neverthless, she is hugely grateful for the opportunities her appearance is giving her.

“I have two young children and I just want to give them the best life I can. Since appearing on The Apprentice I’ve found I’ve become a lot more credible – more people are interested in talking to me and asking my opinion,” she said.

“I’ve been asked to speak at a lot of events. Thanks to the show I’ve had a lot of great experiences; in the second week for example I was at the headquarters of the Beano – creating my own comic in just twenty-four hours!

“Another week we were whisked off to a bakery in London at 1am to make donuts – these are the kind of things I will remember for the rest of my life. It’s been an amazing experience and I am so humble for the opportunities it has brought.”

The eldest of four siblings, Khadija grew up in Peterborough, attending Bushfield Community College before gaining a place Middlesex University to study law.

“Where I grew up was an underprivileged area, and we didn’t have a great deal – my mum was a single mum, but I had a really good time at school,” she recalls. “I still have a good relationship with the teachers, in fact I go back once a week as a business mentor now.

“A lot of the area is still social housing, and I want these teens to know, no matter what your circumstances, you can really change your life and make something of yourself.”

Khadija worked three jobs while completing her degree as she was keen to earn, but admits this did have an impact on her final grades.

After graduating she worked for Accident Direct, before returning to Peterborough briefly where she met her partner Simon. The bright lights of London called her back and she took a job with the Financial Ombudsman.

It was after the complicated birth of her daughter Sorayah that she decided to move to Bourne to be closer to her family.

“The thought of returning to my old job just wasn’t a possibility; I was just 24, with a new baby so I started looking on Google for the cheapest business I could set up myself, so I could work around my daughter – that’s how I came up with cleaning.

“I spent £20 on cleaning products and £20 on flyers which I put in village shops. I started cleaning for some of my mother-in-law’s friends and I took Sorayah with me – my clients let me put the TV on for her while I worked.

“After the first 12-to-18 months it really took off and I had to take on other staff, so I could focus on the sales side, which is where my best skills are. I never had a dream that I was going to be a cleaner, or run a cleaning business – I had a bigger vision. I wanted something that would work around my family, so I could provide the best life for my children.”

Khadija, who is also mum to Taaliah (2), has given her business a unique selling point by making it eco-friendly. The thirty-strong workforce at Opal and Pearl – named after Khadija and Sorayah’s birth stones – use electric vehicles and environmentally-friendly products, which are currently being re-branded and are available to buy online.

She has also created a family-friendly shift pattern for other parents, so they can work around school times from 9.30am to 2.30pm without the need for extra childcare. It’s this ethos which has won her a number of business awards and inspired her to apply for The Apprentice.

“I’ve always been a big fan of the show – we have curry and Apprentice nights on Wednesdays and I always used to shout at the TV, questioning why the candidates were making the decisions they did. I thought to myself I could do better than that, so I decided to apply.

“I was really nervous, especially when I volunteered to be project manager in week two, but you just get on with it. I love watching it back. There is so much more that has been filmed than what you see, but I’m really proud how my personality comes across. Although we’re competing against each other, I’ve made some really great friends through the show. Claude Littner, Baroness Brady and Lord Sugar were great too – I still find it really odd that a billionaire actually knows who I am!

“I’m grateful for all the opportunities I’ve been given but I have worked hard to change my life. My motto is You Only Live Once – you never know when your time is going to be up, so you just have to go out there and do the best you can.”

It’s full steam ahead now for Khadija who is keen to keep growing her enterprise.

Her blog, Diary of Mumpreneur is currently being turned into a book, she’s available for public speaking engagements and she’s also using her new-found fame as a platform to raise money and awareness about the treatment her eldest daughter received following her birth. Sorayah’s umbilical cord became wrapped around her neck, cutting off the oxygen supply to her brain, but a medical trial where she was given Xenon gas alongside a brain cooling treatment was successful.

“Sorayah could have developed cerebral palsy, I am so grateful she was able to be part of the trial,” says Khadija. “Now she is a healthy four-year-old, clever, mobile, funny and strong minded, but this is not the case for all babies born this way, we were very lucky, but also blessed to have received these treatments, which aren’t available at every hospital.

“The gas costs £100,000 a canister, that’s why I’ve started an ongoing campaign to try and raise £5,000 towards assisting its development and the necessary equipment for Sparks medical charity, Peterborough City Hospital and University College London Hospital.”