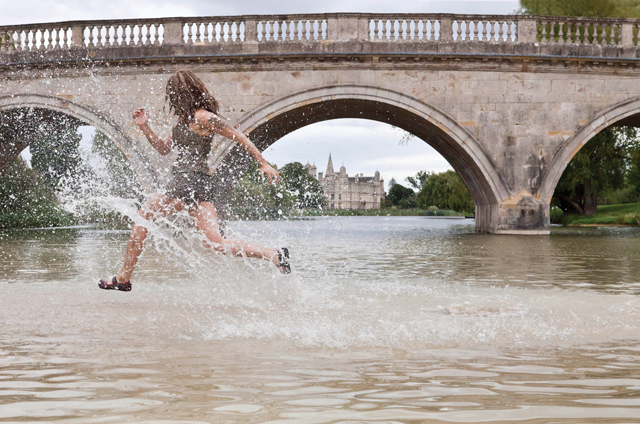 Be part of the rat race

The Land Rover Burghley Horse Trials are already known for having one of the world’s biggest obstacle courses – for horses. However on 11th May Burghley will also become the venue for the world’s largest obstacle course for humans, when it hosts its first Rat Race – a 20-mile course in and around the park consisting of 200 natural and man-made obstacles that have to be negotiated by people, without horses.
“Burghley is one of the top and most challenging events in the world for horses and riders and we wanted to provide an equal challenge for those on foot,” said Burghley estate director, David Pennell. The new competition came about as the estate was looking for ideas to fill a gap in the diary of events held in the park. A Channel Four programme on the Rat Race inspired the committee to investigate. “There is a huge outdoor fitness market and we had already thought of putting on a triathlon but then saw the Rat Race – it is a quality product that is well developed and organised,” said Pennell.

The Rat Race consists of a ‘full mucker’ of twenty miles, for those who like a real challenge, or a ‘half mucker’ of a comparatively mere ten miles and both are open to individuals and teams of five and ten. The park will be divided into twenty zones – the areas that hold the obstacles. These will vary from something as simple as a tree trunk to a complicated structure of scaffolding, pipes and tunnels or the proposed world-record-breaking 105 metres of monkey bars.

“We’ve really pulled out all the stops with this one,” said Jim Mee, managing director of Rat Race Adventure Sports. “We wanted to create something totally new and there is nothing like this in terms of scale – it will be the world’s largest assault course – tough but achievable and those that finish will have well and truly earned that post-race pint.”

The competitors set off in waves and it is expected that the leading pack will complete the twenty-mile course – that is sixteen miles longer than the horse trials course – in around three hours. The rest can be jumping, crawling, climbing, swinging and wading around the course for up to eight hours more.

Pennell said: “There are super fit people who regularly do this while others see it as a personal challenge – a bit like the London Marathon, there will be all types with all reasons for doing it and while almost 4,000 entries have been received we hope that the final number of starters will be around 6,000 which will probably bring in around 10,000 people into the area for the weekend.”

The Rat Racers will line up at the start in front of Burghley House and the course will utilise well-known elements of The Land Rover Burghley Horse Trials course such as the lake by Lion Bridge and Waterloo Plain, but will spread out to other further flung parts of the park and the estate. “It is a beautiful estate with the backdrop of the wonderful house, with a lot of history and lots of opportunity for mud and water – people like getting wet,” said Mee. “We’re going to give them an event to remember, with a well-thought-out course, experienced crew and the best safety and logistics in the business.”

Work to construct the course begins in April. “It is a big undertaking and many of the estate workers such as the forestry team will be involved in helping to build the course,” said Pennell, “and I believe some of them even intend to compete.”

ON YOUR MARKS
The first wave of competitors will set off at 7am and be expected over the finish line before the final wave leaves the starting gate. Spectators are welcome.
Rat Race Dirty Weekend (11th May 2013) for more information: www.ratracedirtyweekend.com
The Land Rover Burghley Horse Trials (5th – 8th September 2013) for more information: www.burghley-horse.co.uk