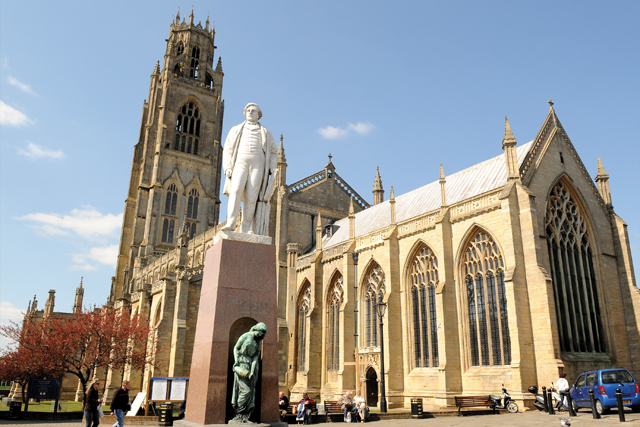 Boston links to the USA

In 1614, our old friend, Captain John Smith, from Willoughby, Alford, discovered and mapped the coastal regions of Maine and Massachusetts in the North Eastern corner of what is now the USA. He named the area New England and the river the Charles River, after King Charles 1 of England. He declared that he had found “a paradise”.
From 1624 to 1630 various locations were settled upon with a variety of names, some occupied by native tribes, but on 7th September 1630, the whole area was named Boston, acknowledging that the principle settlers were from Lincolnshire. Previously they had been imprisoned in the Guildhall at Boston, Lincolnshire. Disillusioned and sick of religious bigotry, they were freed to set sail and landed on the shores of New England, with freedom to worship.

In 1632, Boston became the capital of Massachusetts. Thanks to its excellent location on the deep, sheltered harbour, Boston quickly became a centre for shipbuilding, fishing and trading. The only thing more important than trading was religion and that is said to be due to the influence of the English settlers.

In 1684 the colony’s charter was revoked and the inhabitants came under tighter British control. Taxes were levied on sugar, wine and coffee and that was the start of the trouble. “No taxation without representation”, became a rallying cry for the rebels. Boycotts, demonstrations and riots followed. In 1767 tax was imposed on paper, glass and tea and a year later, British troops occupied Boston in force. Perhaps inevitably, tension led to violence and in the ‘Boston Massacre’ of 1770, five colonists were killed.

Parliament relaxed some of the taxes, but kept the tea tax. In December 1773, three British ships sat at anchor in Boston harbour waiting for their cargo of tea to be unloaded. Before that could happen the self styled ‘Sons of Liberty’ boarded the ships and dumped 342 chests of tea in the harbour.

The Boston Tea Party became a rallying point for the anti-British.

Over the next few years the British enjoyed some military successes, but also suffered heavy casualties. On 17th March 1776, they evacuated Boston by ship and on 18th July the declaration of independence was read from the balcony of the Old State House.

Boston MA has outgrown its older namesake; the city itself has a population of some 600,000, whilst the residents of the Greater Boston area number in excess of 4 million.

English visitors will find names which sound familiar. In addition to Boston and Lincoln, there are Portsmouth, Cambridge, Manchester, London, Plymouth and many more.

Although separated by 3,500 miles, good relations exist between the two Bostons, significantly more so than Jersey and New Jersey, Hampshire and New Hampshire or York and New York, or should that be New York (Lincs) and New York (NY).

Many American Bostonians visiting Britain include Boston in their itinerary, particularly those who believe they have some historical connection to Lincolnshire. I like to think that we Lincolnshire ‘Yellowbellies’ give them a good reception and those of us who visit Boston MA regularly, certainly receive one in return. New Englanders are invariably friendly and welcoming to all ‘Brits’ especially those from Lincolnshire, even though many of them think that the county was named after their former President, Abraham.