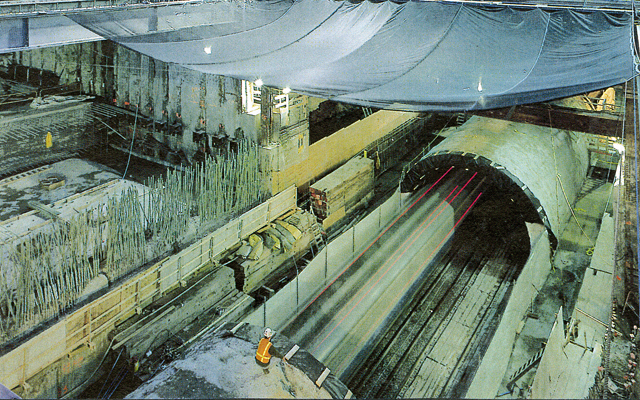 Officially called the Central Arterial Tunnel Project, but known worldwide as the ‘Big Dig’, its origins go back to the 1950s. President Dwight D Eisenhower conceived a plan for a network of highways coast to coast across America. The problems in Boston USA were threefold. First, Route 90 which should have run from Seattle in Washington State to Logan Airport in Boston, right on the Atlantic coast, actually stopped three miles short when it hit Route 93, which itself was the second problem. Route 93, up to twelve lanes wide, ran right through the very heart of downtown Boston, causing enormous congestion daily.

Thirdly, at the northern end of the project was an old, ugly, severely strained trestle bridge, an elevated highway, known locally as the ‘Green Monster’. The solution was to complete Route 90 to the airport largely underground; reconstruct eight miles of Route 93, half of it underground or underwater; and replace the Green Monster with the world’s widest cable-stayed bridge, spanning the Charles River and creating a new focal point on the city skyline. The Central Arterial Tunnel Project would at last complete President Eisenhower’s original interstate plan.

Simple? Well, not really. It was, at the time, the largest and most complex urban infrastructure project in the history of the modern world, bigger in scale than the Panama Canal or the Hoover Dam. It presented engineers with challenges, the solution to which would eventually advance engineering around the world.

Tunnelling beneath the murky waters of Boston harbour, working around a maze of underground railway lines, avoiding building foundations and services, old wharfs and many other obstacles were among the many issues testing the ingenuity of engineers. It became the most notorious construction project in US history. At its peak 5,000 people worked directly on the project daily and up to 10,000 were engaged indirectly. And throughout the thirty-year enterprise, the city of Boston had to remain open for business.

It was always recognised that the construction of a road network under a 370-year-old city would cause some disruption but the authorities made a pledge to keep the impact to a minimum. Even though pedestrians and drivers were often frustrated, or occasionally angry, overall the planners generally succeeded in keeping their pledge.

Now that the project is complete, access to Logan Airport has greatly improved and the Green Monster has been removed, reconnecting the city to the waterfront, and opening up some glorious views.

Opinions on the traffic congestion are divided, as the general increase in vehicle usage has eroded much of the benefit; although most people agree that it would have been worse without the Big Dig. On the downside, the project cost $24.3 billion (more than the Channel Tunnel, the Hubble Space Telescope, and the Airbus 380) – the original budget was $2.6 billion – and it was more than a decade late in completion.

It would be good to see Boston, Lincolnshire achieve its bypass but let us hope they do not fall into the same traps as their namesake in the USA. My advice would be, do not go underground.