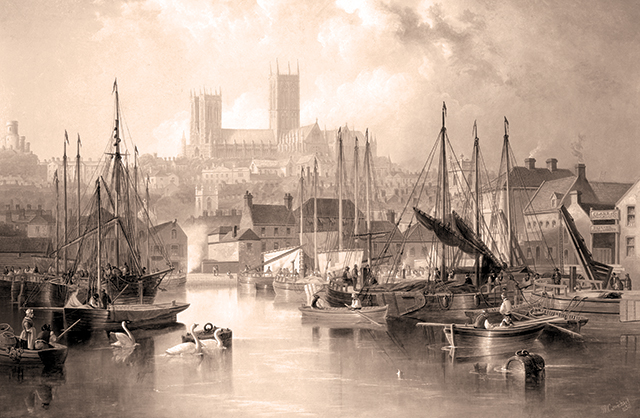 The first known settlement in Lincoln, dating back to the 1st century BC, was around the Brayford Pool area and this is how Lincoln derived its original name, Lindon – ‘Lin’ meaning pool and ‘Don’ meaning at the foot of the hill. Alan Middleton charts its history.
Pottery and evidence of timber houses have been found on the eastern side of the pool dating back to that period. In addition, the famous William Shield, belonging to a local tribal chief, which dates back to 300 BC, was found in the same area. The William Shield is now housed in the British Museum. In 48 AD the Romans conquered Lincolnshire and built a fort at Lincoln. Towards the end of the 1st century the area was relatively peaceful and Lindon slowly grew into a large and prosperous town, reaching the peak of its prosperity in the early 4th century. Lindon was a small inland port but the Romans deepened the River Witham to allow larger ships to reach it from the sea. They also dug the Foss Dyke Canal to connect the Witham to the River Trent, with the Brayford being the essential link.

The Romans left Britain in the early 5th century but the importance of the port of Lindon remained as the medieval City of Lincoln was built on the area’s wealth, largely on the back of the wool traded up and down the waterways to the Brayford Pool. The name emerged in the 10th century when the city was occupied by the Vikings. ‘Breit-ford’ meant ‘where the river is broad and fordable’.

Lincoln boasted the fourth busiest waterfront in England by the mid-13th century but the demise of the wool trade led to gradual decline and the future started to look rather bleak. But in 1744 the Foss Dyke was dredged and this heralded yet another new era. The pool was then bordered by warehouses, mills, granaries, breweries and maltings, and sailing barges carried goods to and from the city.

The 18th and 19th centuries were the heyday for trade around the Brayford which, once again, became an important inland port. In 1817 the gardens on the north and east banks of the pool were replaced by industrial units, again, serviced by those huge sailing barges, by now bigger than ever.

When the railways came to Lincoln in 1846 they signalled the beginning of the end for the lucrative waterborne traffic, but the actual end was some way off. In the short term the railways created further industrial expansion. By the early 1900s the pool was lined with corn and coal merchants, timber yards, brewers, boat builders, general builders and an oil company. Barges, often three deep, were tied up on the wharf side. Later in the century appeared Hovis Mills, Electricity House, C W Green, Marine Engineers and the butchery depot, abattoir and transport HQ of Lincoln Co-op.

Eventually, of course, the barges could no longer compete with the rapidly developing road and rail network and the Brayford once again fell into decline; businesses closed and the pool was scattered with litter and half-submerged derelict barges. It started to look a sorry site. But in 1969 its fortunes turned once more with the establishment of the Brayford Trust and the restoration of the pool as a marina for pleasure boats – and that was just the beginning.

The Brayford Waterfront is now one of the most vibrant and exciting parts of the City of Lincoln. It is home to a 21st-century university and is surrounded by hotels, bars, restaurants and entertainment venues. What a history, what a transformation and how wonderful.